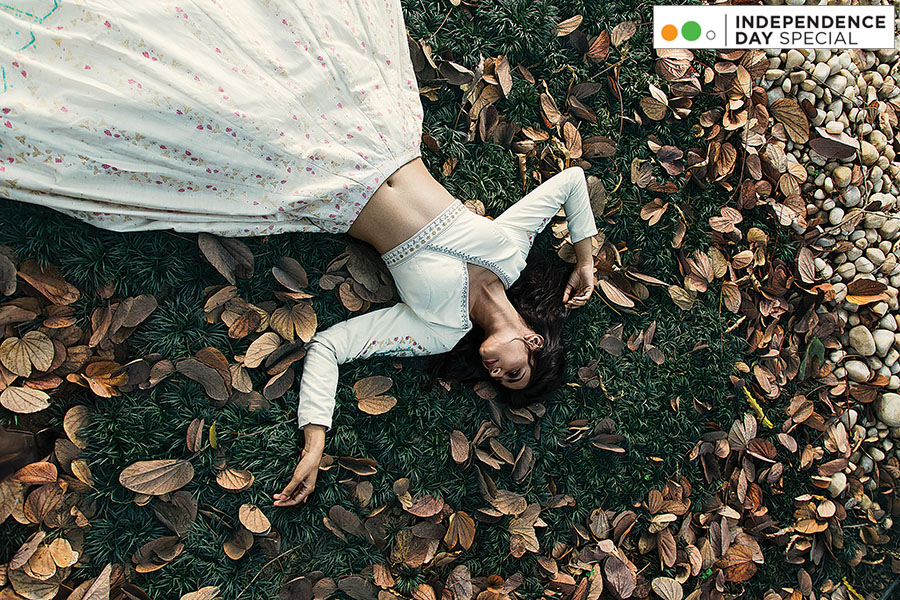 The possibilities of creating something by using the fabrics at Ekaya Thaan are limitless
This January, the Paris Haute Couture Week saw an unlikely marriage: Fourteen French designers created intricate wedding gowns with fabric from Benares and Lucknow, woven with traditional techniques from across the country, including chikankari and mashru. At a different wedding—the UK’s Prince Harry and Meghan Markle’s in May—activist Suhani Jalota, who runs Myna Mahila Foundation, was in attendance in a Sanjay Garg silk and organza sari. Last year, creations from Garg’s brand, Raw Mango, also found their way into an exhibition titled ‘Items: Is Fashion Modern?’ at New York’s Museum of Modern Art; the Victoria and Albert Museum in London has a permanent display of Raw Mango saris since 2012. 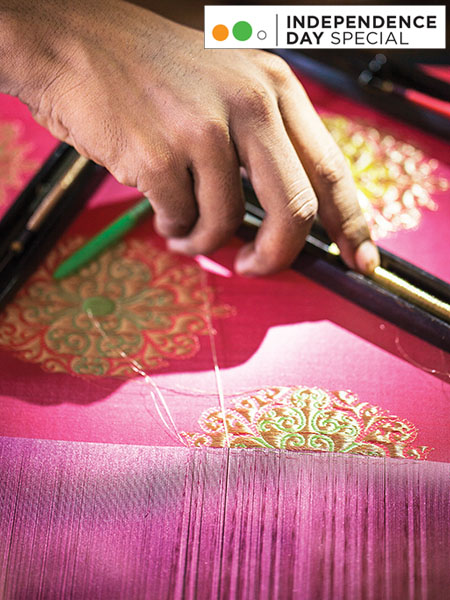 Ekaya promotes the Benarasi weave
India’s fashion designers have found their way into the global market in many ways over the past couple of decades. For instance, while Anita Dongre recently opened a flagship store in New York, Ritu Kumar has two in Dubai. Gauri and Nainika’s couture gowns have been spotted on red carpets at the Oscars and the Grammys, and Manish Arora remains a Paris Fashion Week favourite. But a new breed of designers and entrepreneurs is presenting fabrics and weaves, which are an intrinsic part of India’s heritage, on the global stage and are making this heritage its biggest strength. They are also changing how these fabrics are perceived—not just as traditional wedding finery, but also as hip, trendy and fun.

The fabrics for the wedding gowns at the Paris Haute Couture Week came from fourth-generation Benarasi textile-maker Palak Shah, 26, CEO of Ekaya, a company that promotes the Benarasi weave. So far, her family followed the traditional methods of not just weaving, but also marketing. “They did it the traditional way, dealing with wholesalers,” says Shah. “My aim was to create a luxury, international brand that celebrates the finesse and engineering-art of the fabric.”

Shah, who studied at King’s College London and Babson University, founded Ekaya in 2012, with a mission to change the perception of Indian fabrics. “I understand that the sari cannot become a global phenomenon like the kimono because it requires a certain technique to wear. Our rich fabrics, however, are much more versatile than most people imagine.” 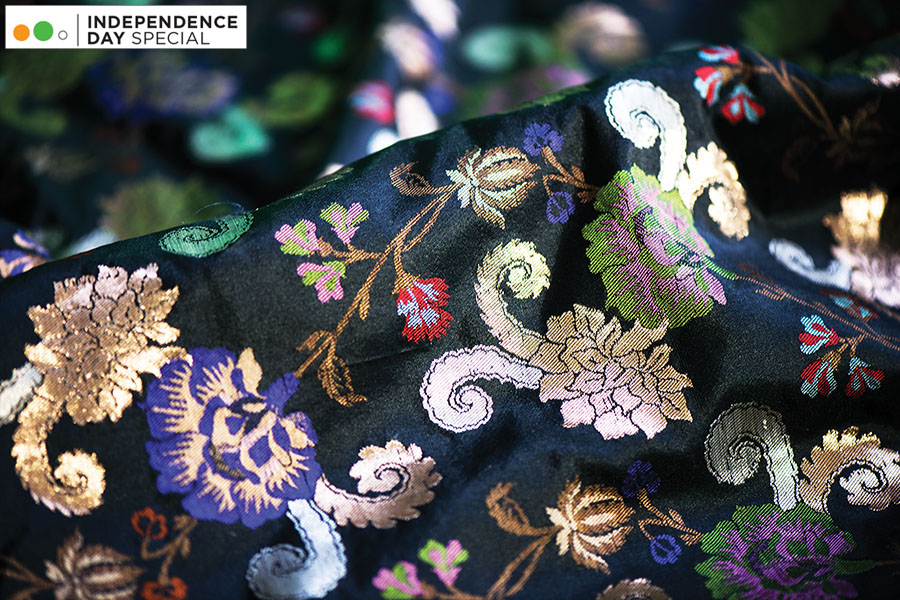 Shah doesn’t believe in attaching rules to how fabric should be used. Even while working with the federation of French designers, she handed over the fabric with no instructions. “I didn’t even tell them which side was up,” she says. “And the results were absolutely beautiful, breaking all stereotypes. We saw different interpretations of the weave, even lovely reversible methods.” 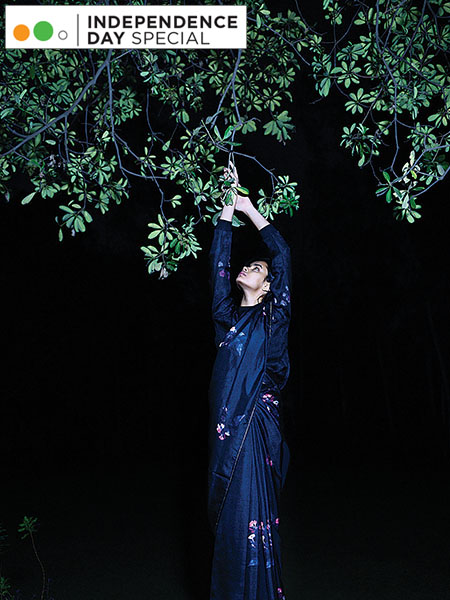 Midnight collection from Raw Mango
“People are only now beginning to realise how diverse our country is, and so much is still left to explore,” says Sanjay Garg, who started Raw Mango a decade ago, with the deeper purpose of reviving India’s textile heritage. “I am glad that Indian weaves are being celebrated internationally.”

Raw Mango began as an exploration of the chanderi textile, and ways to innovate on the loom to make a fabric that is rooted in Indian culture and relevant to a global audience. “The idea was to engage with India’s visual vocabulary through measured interventions and traditional practices, be it design, material, tools, technique or handloom,” he says.

While Raw Mango is a sari brand, Garg also has an eponymous line that experiments with Indian textiles by fashioning dresses, coats and separates. “The DNA is the same, the textile development process is as involved; however, the intention behind Sanjay Garg was to give occasion wear options to women when they were not wearing a sari,” he says.

Reflecting a similar sentiment as Garg’s, Shah says, “We have to find new ways to encourage young people to wear Indian weaves. We can experiment with contemporary silhouettes and softer drapes to do this. There’s so much sheen and sharpness in our heritage fabrics, we need to show them to the world.”

“It’s great that textile is in fashion now, but we need to focus on its development and longevity,” says Garg. “We need to recognise the value of handloom, its communities and human conditions, on a national and regional scale to tell its story.” In addition to chanderi, the brand has also worked to revive the Benarasi brocade, mashru silk and cotton from West Bengal. Garg is particularly proud of his work with mashru silk, in which he has developed a layered weaving technique that he introduced in Benares. This also heralds a return to silk, which had, in the past years, been replaced by rayon.

Giving traditional textiles a contemporary, quirky twist, and thus a new market is Jodi, which was started over a Pinterest board by Karuna Laungani, 34, and Gauri Verma, 28, four years ago. The brand uses thick, luxurious cotton and chanderi fabrics, block-printed in motifs such as pineapples, foxes and clouds, and stitched into breezy dresses and tops. “We worked in fashion and would obsessively pin things we liked onto a board. In the process, we fell in love with Indian fabrics and prints and wanted to create a truly global product that used these techniques,” says Laungani.

Working with a team of craftsmen in Jaipur which does the block-printing, Jodi ships its products across the world and has found clients in Singapore, Australia, the US, Argentina and the Netherlands. 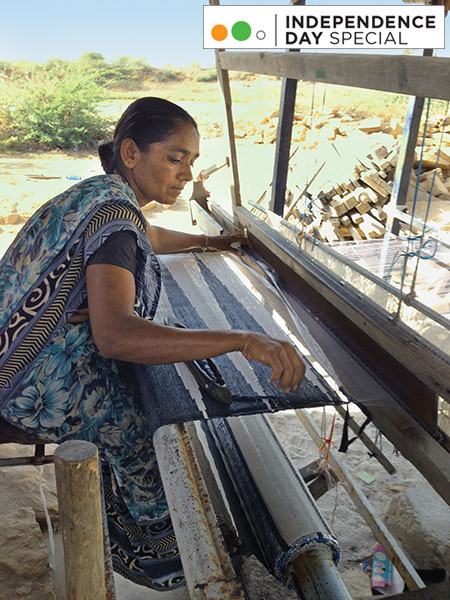 Love is Mighty creates accessories using artisanal, tribal methods
Putting Indian textile traditions on a global platform need not always be in the form of garments. For instance,  New York-based Monisha Raja’s label Love is Mighty uses organic, biodegradable material sourced in India, Italy and New York. While the organic cotton, handloom and vegetable dye comes from India,
faux-leather is sourced from Italy through sources in New York, as faux-leather in India comes mostly from China and is not of the best quality. This fabric is then crafted into distinctly Indian accessories by embroiderers, weavers and semi-nomadic goat herders in north and east India. Her collection includes products like faux-leather ankle boots embroidered with a tribal Gota motif that have been hand-crafted by a Rabari tribeswoman.

Raja, a Malayali who was born in Calcutta, grew up all over India since her father was in the Indian Army. At 20, she moved to New York to study fashion design. “Growing up in India, I was surrounded by beautiful, intricately hand-worked products,” she says. “As India becomes an economic superpower, these communities are being marginalised and assimilated into cities, losing centuries of art traditions. It is time to wake up,” she says. 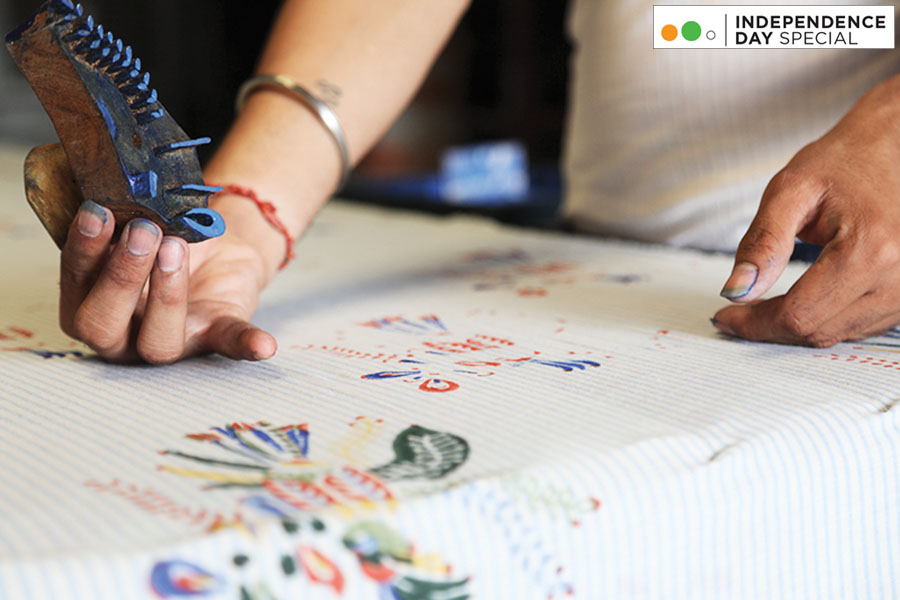 Jodi gives traditional textiles a contemporary, quirky twist
“There is a growing demand for sustainable clothing and the uniqueness of Indian craft, but craftspeople don’t have access to these customers,” says Laungani of Jodi. “More business owners and designers need to help them develop it for a modern market. All over the world, you find ‘Made in India’ outfits. If the world is coming to us, why should we go anywhere else?”

Tweets by @forbes_india
Streaming hot: Freedom to tell stories on OTT platforms
Freedom of choice: To choose or not to choose