Will the advance towards gender equality halt or be reversed?

Women with progressive thoughts must be in power 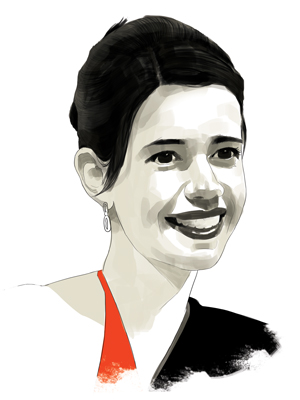 Image: Sameer Pawar
Kalki Koechlin is an actor and writer for films and theatre. She studied drama and theatre at Goldsmiths College, University of London, and worked with a theatre company for two years. There, she was exposed to devising physical theatre and exploring improvisation as a means to create original work. She made her Bollywood debut in the acclaimed Dev D

In the last decade, and particularly in the last few years, Indian women have begun to speak up. Be it the unprecedented nationwide protest rallies against the Delhi gang-rape, or the acknowledgement in social circles that marital rape does exist, the discourse on women’s rights has begun. It’s still a fledgling movement, but it’s a beginning nonetheless. Will all of it be undone by a religious right-wing government at the Centre?

I don’t think so. True, the religious Right has traditionally been patriarchal and their regimes have been marked by attitudes towards women that put their needs and rights secondary to men’s. But it’s only a right-wing government; we are not a right-wing country. We are a country that’s far too massive, with many diverse roots and beliefs.

And let’s not forget the atmosphere in which this government came to power. An atmosphere of protests, especially over women’s safety, movements for change in the corrupt governing systems, such as Anna Hazare’s, scams unveiled in the media high up in the political strata, discussions all over about the inability of the Congress government in power. Suddenly, we awoke to a number of glaring injustices and we demanded change.

Desperate times call for desperate measures, so if it is in this atmosphere that a right-wing government came to power, it is because we expect change, we expect action from this new government. That is not going to be easily forgotten. An example: While there are people like Health Minister Harsh Vardhan who stress on fidelity, and not condoms, to fight AIDS, there are also those who can raise an outcry over his statements.

Look at Article 377. The fight was almost won when the Delhi High Court decriminalised homosexuality in July 2009, but the Supreme Court set it aside, sending the activists back to their drawing boards. But people are still backing themselves in their bid to repeal Article 377. It tells us that people have learnt not to shut up. Yes, we have woken up to a lot of issues quite late, but it’s heartwarming to see that we’ve begun to question traditions and people in power. Our time has indeed come.

We are a complicated country. We want development, but are afraid of change. We have welcomed generic, mass produced brands such as McDonald’s, Starbucks, fashion brands that fill up malls and food brands that fill up supermarkets and we certainly unanimously enjoy the benefits. Yet, we remain conservative in family structure, in education and in social behaviour.

The dichotomy is these very developments bring with them a set of capitalistic and globalised ideals that are anything but conservative: Individual expression, materialism and an each-to-their-own mentality. And we women have benefited the most from this: Women are getting recognised at the workplace, they are asserting themselves through the way they dress and behave, and they are getting educated.

Add to this backdrop the widespread and borderless world of the internet along with access to social media, which exposes each individual to a public opinion available to the rest of the world. There’s now an international audience watching every socio-cultural and economic development in the country. I don’t think the right-wing government has the power to rein in such activism. 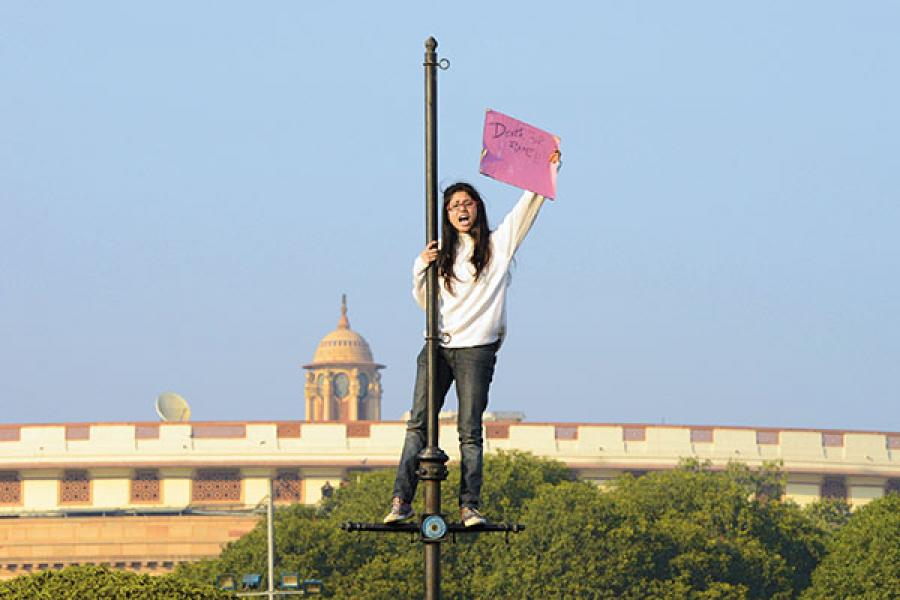 Image: Getty Images
The brutal gang-rape of a 23-year-old para-medical student on December 16, 2012, in New Delhi led to massive protests across the country
Today, we live in a world where everything is on social media. Nothing is hidden or unmentioned and issues of concern get intensified on different platforms. The best example is Gaza right now; we get to know much more about the conflict there than what is being reported in the media. This works in our favour.

You could say that an authoritarian leader could control social media. Two women from Palghar were arrested for posting comments against the Mumbai shutdown for Bal Thackeray’s funeral; a professor from Kolkata was beaten up by goons and later sent to jail for posting a cartoon on Trinamool leader Mamata Banerjee; citizens across states were threatened and arrested for “offensive” posts and messages against Prime Minister Narendra Modi. We do have intolerant attitudes among the ruling elites and they often crack down on the pretext of “actions hurting religious sentiments”.

But the silver lining is that we know about it: We know what is being controlled, what is done under duress. Before social media, there was no discussion. Now, we know. That knowledge is power for the people more than it being against them.

That makes me hopeful for the next five years. I feel that the government will take steps for the betterment of women not because it is expected to, but because it does not have a choice. Women’s rights in India have become an international issue. More and more people from India and abroad are reaching out to the government to improve the lives of women in our country. There is no way the government can turn a deaf ear to them.

However, that does not mean it will be easy for us. It will be a slow process that can only really be confirmed and solidified through years of education and by education I mean rethinking the structure of education. We are known as a country of toppers, we know how to pass exams in engineering and medicine in order to get to the best schools abroad, but we still don’t know how to behave with each other. Especially when it comes to the opposite sex. Not only children, but parents and even teachers should be educated in ‘social engineering’. When I heard of the absolutely terrifying case of the rape of a six-year-old in a Bangalore school, the first question that came to my mind was ‘what is going on in the mind of an adult teacher that he can do this to a tiny child’? Don’t we need to address that mind? And avoid the breeding of such minds?

We constantly talk about educating the girl child, but what is the point of educating her if the men in her lives don’t understand her freedom and rights. It’s very important to teach boys from a young age. Many men believe that feminist movements are anti-men; fact is, they should include men. We need men to be feminists. Else it becomes a battle. Us vs them. Men vs women. Such a confrontation is not going to have a long-lasting impact. 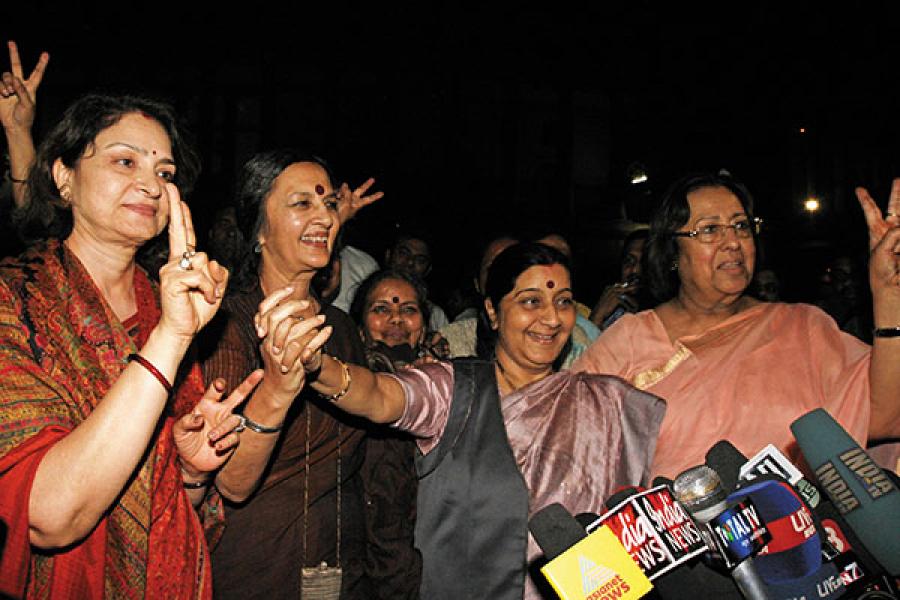 Image: Getty Images
The Women’s Reservation Bill was passed in the Rajya Sabha on March 9, 2010
Meanwhile, within the power circles you want your politicians to be the first ones to recognise that and take the existing hierarchy head on. Which is why there should be a lot more women in politics. I am all for reservation for women in Parliament. Without them, people exercise the out-of-sight-out-of-mind option. If you don’t see enough women in positions of power, you forget to empathise with them. If you only see women as those who cook meals at home, you are never going to make an effort to change the situation around you.

But it’s not enough to have women in power, we need women with progressive thoughts to be in power. We often see that women in positions of power feel they have to be more ‘men’ than men to justify their position. That has to change.

Once again, that will take time and a lot of ‘social engineering’. I cannot stress the importance of men among the prime influencers for the emancipation of women. Men are, till now, still in the lead as far as our country goes and it is up to them to recognise that women are catching up with them and let them run the country side-by-side with them.

I’ve also always maintained that society has to work with the government in power, be it the one you’ve voted for or against. In our country, society and government are typically at odds with one another. I’ve seen various NGOs struggle to find basic information or research statistics because they don’t work with the government, and neither does the government make efforts to cooperate. If all these people joined forces, they would be far more influential than they could imagine.

The façade that we have built in our country is that we are traditional and conservative, yet in reality, we are materialistic and don’t care beyond the borders of our own household. Our conservatives cry out against social change, saying it will ruin our ‘family values’. But in reality, social change cannot lead to the withering of family values because family values are not something that can be forced upon others; we tend to think of it as a no-option entity, that you’ve got to have it. It’s just the other way round: People should hold on to family values not because they have to, but because they want to. It should and can only come from within.

I have no idea what the long-term future for women in India will be, but I do know that tomorrow is too early to give up. There are too many wounds that have yet to heal and will leave scars that will be remembered. There are too many stories to be told, battles to be fought and avenues in which to be heard. So, despite the odds of a right-wing patriarchal rule in the country, I remain hopeful. After all, I am a woman, and I want this to be a country I can live in.

Tweets by @forbesindia
Not Quite National
The Smart Option