The Lost Heroes of Economic Freedom 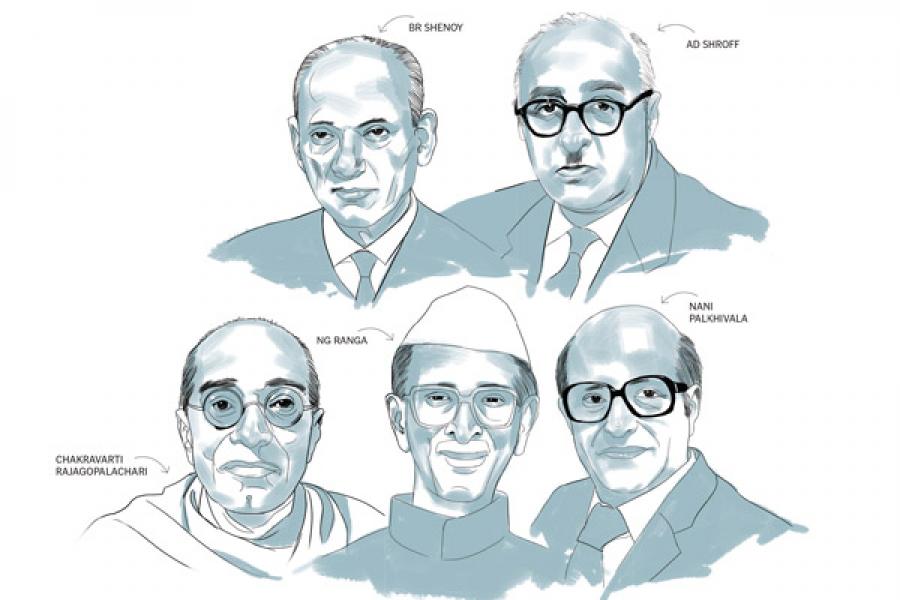 When the history of India is written, no future historian should pity us that in a country where great saints have lived, there was not a single Indian to point out the absurdity of the ‘permit-licence-quota raj’.” So said C Rajagopalachari (Rajaji) when asked why he persisted in criticising Nehru’s economic policies when no one heeded him. G Narayanaswamy, a close associate, recounts this anecdote while penning a piece on him in Profiles in Courage: Dissent on Indian Socialism.

As the debate over two economic models—a welfarist-socialist one and a market-oriented one—gets increasingly cacophonous, it is worthwhile to remember a time when such energetic pow-wows were near-absent. When the predominantly left-of-centre intellectual climate—which dominated every field from academia to films—obscured any contrarian view.

And yet a few voices in that wilderness refused to be stifled, forcefully and cogently arguing for a liberal economic order and warning of the dangers that the Nehruvian model posed not just to the economy but to the polity as well (a prediction that came true in 1975). Today, as the economic punditry space bursts with numerous illustrious advocates for an open economy, there is danger of those older voices being forgotten.

Perhaps the least well known of these (outside the rarefied world of economists, that is) is that of BR Shenoy. Shenoy’s many treatises provided the intellectual underpinning to the battle against development economics and centralised planning.

His solitary dissent note to the memorandum of the panel of economists on the Second Five-Year Plan (of which he was a member) is a must-read critique of deficit financing and the dangers of over-ambitious plans. “Controls and physical allocations are not a necessary adjunct to planning... There are great advantages in allowing freedom to the economy, and to the price system in the use and distribution of the needs of production,” he wrote.

Shenoy stands out because he was from the academic world, which did not put up a strong enough opposition to the Nehruvian socialist world-view. There were right-of-centre economists but few who consistently attacked the economic path that India was taking the way Shenoy did. A later generation of economists—Jagdish Bhagwati and Meghnad Desai, among them—was vocal in its criticism but they were largely based abroad and their influence increased only after India liberalised its economy in 1991.

In the overwhelmingly socialist-inclined political space, it was the founding triumvirate of the Swatantra Party—Rajaji, Minoo Masani and NG Ranga—who ceaselessly championed an alternative economic model. Rajaji, the legend goes, was the one who said the ‘licence-permit-quota raj’ had replaced the British raj. The Jana Sangh (the predecessor of the Bharatiya Janata Party) was also in favour of an open economy but its economic ideology was overshadowed by its cultural conservatism and jingoistic nationalism.

It was Nehru’s increasingly statist policies that brought the three Congressmen together, with the Nagpur session of the Congress in 1959 (advocating joint co-operative farming, considered a euphemism for collectivisation of agriculture) triggering the final break with the party and the launch of the Swatantra Party. For 15 years, it presented a trenchant and principled opposition to government micro-management of the economy, deficit financing and high levels of taxation. An impressive showing in the 1967 elections was followed by crushing defeat in 1971. The party disbanded in 1974, by which time Rajaji had died and Ranga inexplicably rejoined the Congress. It was left to Masani to keep the Swatantra ideology alive till his death in 1998.

And then there was the Forum of Free Enterprise (FFE), set up in 1956, which single-mindedly debunked myths about socialism in the popular mind and countered the anti-private sector calumny of the socialists. The Forum was the brainchild of AD Shroff—one of the authors of the Bombay Plan of 1944 and a non-official delegate to the Bretton Woods conference—who had been opposing Nehru’s socialist views since the mid-1930s. With consumer activist MR Pai heading the secretariat for 20 years, the Forum provided a platform to an array of voices through writings, lectures and essay competitions.

Though better known for his annual analysis of the Union budget, eminent lawyer Nani Palkhivala (who was FFE president for 32 years) needs also to be remembered for his 1965 book, The Highest Taxed Nation, which made the very points that tax reformers of the early 1990s did. In the courts, he not only defended personal freedoms but also economic freedom, challenging bank nationalisation and a newsprint control order in the 1970s.

All these people were reviled by the establishment and subject to slander campaigns, the most common being that they were American agents. The Swatantra Party was labelled a businessman’s party (though the majority of industrialists did not fund it). A central minister told Shroff that Nehru wanted him to disband the FFE. But these voices refused to pipe down.

Were these the only dissenters? Certainly not. There were people like Freddie Mehta, Hannan Ezekiel, DR Pendse and Jay Dubashi (who later became an ideologue for the BJP), to name just a few. But it was natural for them to speak out against socialism since they were associated with private industry. The first three worked for the Tata group and Dubashi was director of the Economic and Scientific Research Foundation under the Federation of Indian Chambers of Commerce and Industry.

Eyebrows will be raised that IG Patel, Manu Shroff and several illustrious economists from the Bombay school do not find a mention here. But not all of them were vociferous or outspoken in the way the others were. Patel and Shroff worked for the government and though they may have slipped in some liberal ideas into economic policy, they were not open dissenters or radical reformers.

That’s why it is necessary to doff our hats to these brave voices which ensured that India will not be pitied in the way Rajaji had worried about.

Seetha is a senior journalist and author