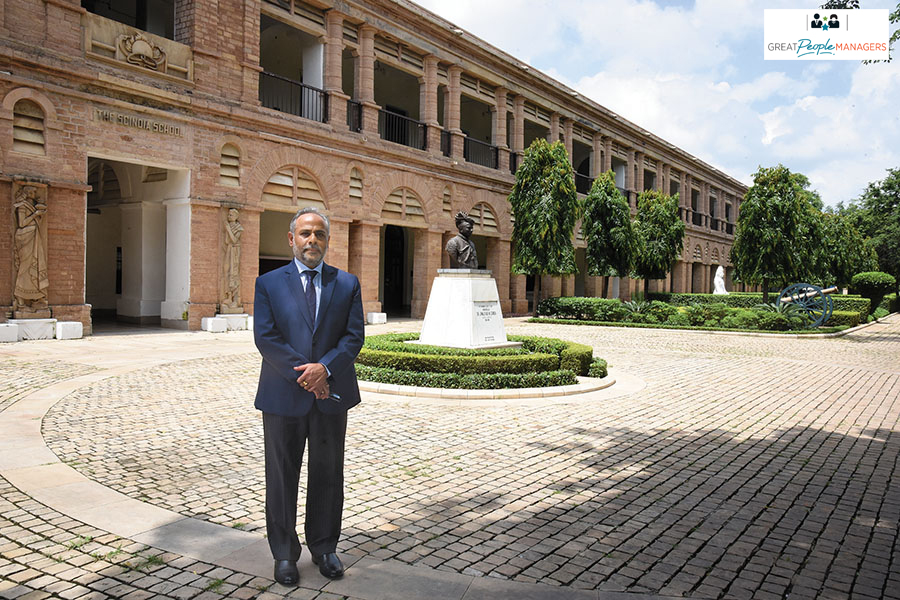 Ten years into his stint as a teacher at Doon School, Madhav Deo Saraswat mustered the courage to ask Shomie Ranjan Das, the former principal and an educationist, why he had hired him. “I saw you playing football and realised you will either contribute inside the classroom or outside. I am always looking for people who can contribute, he told me,” says Saraswat.

It’s an abiding principle for Saraswat, 53, now the principal of The Scindia School in Gwalior. The doors of the principal’s office at the prestigious institution located within the Gwalior Fort are always open for ideas. “I never say no,” he says. “My job is to motivate people to innovate and contribute.”

He’s often seen venturing out of his cabin and into the dining hall, the accounts office, and all around the campus. “Every staff member is equally important. A school can run without a principal but not its teachers and other staff,” says Saraswat, the holder of three master’s degrees, a BEd and a PhD. “I can be extremely demanding, pushing people to persevere, but never judgmental.”

His connect with people came through in the wake of the nationwide lockdown, when the students were left confined to their homes. Saraswat led the teachers to engage with the boys, not just for academics, but for their mental well-being as well. “Besides, we cut down certain expenses and passed on a waiver of ₹1 lakh on the annual fees to the parents. It created a sense of mutual trust and respect,” says Saraswat.

He also organised a readiness survey to begin online classes and started plugging the gaps—some with internal training and some through purchases. “After 45 days, we repeated the survey. If, in the beginning, we were 4 out of 10, now we were at 8-8.5. Accepting where we were and improving ourselves was our approach.” 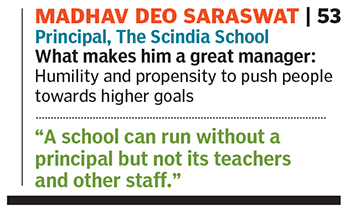 Besides steering the school that has luminaries like former security adviser Shiv Shankar Menon, industrialist Abhay Firodia, and performing arts stalwart Ananda Shankar, among others, as its alumni, Saraswat goes about discovering opportunities for his colleagues to nurture their potential. With this, he believes, he’s paying forward his seniors at Doon. “They wanted to prepare us for a bigger role in life. And I want to do so for my people here.”

“Dr Saraswat practises collective leadership to create an environment where each individual feels and acts like a leader. From the teachers to students and support staff, everyone is tasked with crucial leadership roles within their domain,” says Smita Chaturvedi, vice-principal. The students are not only charged with conducting an open house twice a year where they face questions from prospective parents, they also join hands with teachers and run community service projects in Gwalior, Rautu ki Beli (Uttarakhand) and even Ladakh.

Tweets by @forbes_india
How Ashton M. Henry is empowering thousands by teaching them how to be financially literate
Photo of the Day: Fruit of the gods?