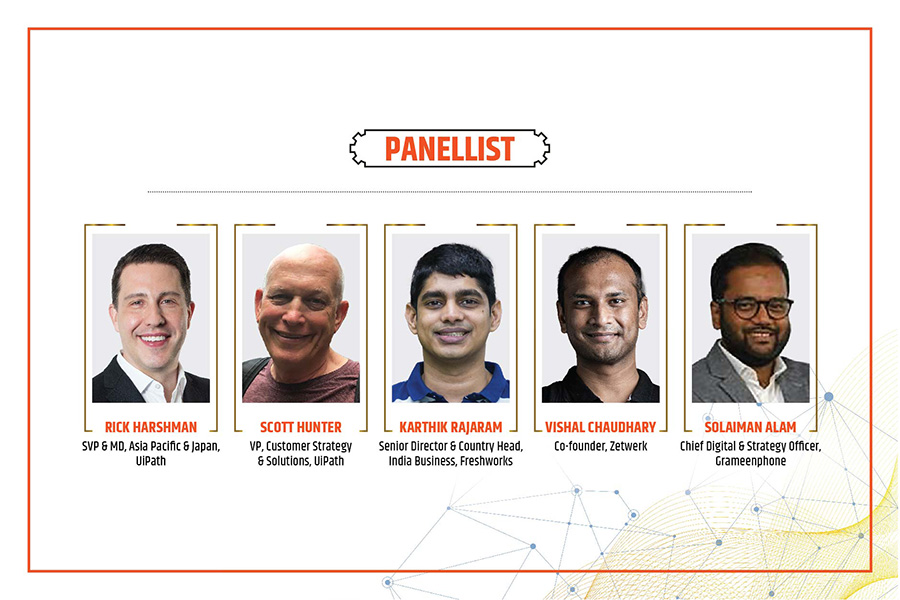 India's economy is back on track and booming. The impetus for this growth comes from a new breed of entrepreneurs determined to scale global heights. These new-age entrepreneurs are changing the paradigm, ushering in a new era of fast-paced, focused, inclusive and sustainable progress. The validation of the fact can be seen in the manner in which new "Unicorns" are emerging at a regular pace.

To understand and deliberate on how the economy is shifting gears through the adoption of digital processes, Forbes India Influencers of Change, in partnership with UiPath, hosted a power-packed discussion featuring business leaders from leading companies.

The discussion started on an interesting note with Karthik Rajaram talking about the transformative journey of Freshworks as it emerged as India's first SaaS unicorn in 2018 and became the first Indian SaaS company to get listed on the NASDAQ stock exchange in the US in 2021. One of the key pointers to the success of any venture is the need to obsess in providing the best experience to customers and employees. Karthik emphasised how "designing customer journeys has become critical" in this hyper-connected world.

In addition to the customer focus, the company also requires a leader with a vision. Karthik spoke about how a visionary leader can set the pace for a company to grow by setting up goals and initiatives that were "tangible, measurable and instrumental".

He also spoke about the benefits of technology adoption and how companies, especially new entrepreneurs and MSMEs, can achieve scale and efficiencies through automation. The leading indicator of success for a company is its use of technology to build scale. "They implement automation thoughtfully and deliberately, not as a replacement but as an augmentation and efficiencies," he said.

Solaiman Alam shed light on the role of automation and technology in a company's growth journey. Grameenphone is the leading telecom operator with the highest number of subscribers & most expansive network in Bangladesh, and the company has been in operation for over two decades. He spoke about how customer-centricity is a critical need behind the success of any venture.

Solaiman also spoke about how the pandemic had accelerated automation. As everything has gone digital, the customers are also asking for processes and functions to be automated. He stated that a successful company has to match the customer needs and keep ahead of them. But he also noted caution; tech adoption and implementation need to be done based on the problem it solves. The one question to be asked before implementing any technology is whether "it is adding any value to the customer," he added.

Vishal Chaudhary too concurred on the importance of matching customer needs. Zetwerk runs a business-to-business marketplace for manufacturing items that connects OEMs (original equipment manufacturers) and EPC (engineering procurement construction) customers with manufacturing small businesses and enterprises. Automation can go a big way in helping companies assess and implement customer-friendly practices and processes within their realm.

"We have built a lot of tools that have helped customers scale their supply chains, from sourcing from one or two geographies, they have been able to go beyond due to the power of technology," he added.

Another possible factor driving automation is the relative ease-of-doing-business. "Covid has made businesses realise that operations could be managed remotely, and yet you could have the efficiencies, as it was earlier, " he added.

Bringing a global perspective to the discussion, Scott Hunter set out the stepping-stones for automation. He spoke about the Automation Operating Model or AOM. Through this model, he extolled the need to look at digitisation at a deeper level, namely understanding, evaluating, and implementing technology with much deliberation.

"It is vital to know from where we are now to where we need to grow," he said

Scott also highlighted how the value of a tech implementation could be done on four bases: tangible, intangible, total cost of ownership, and the strategic value of the solution.

"All of these must be aligned in a pyramid to drive automation, " he added.

Meanwhile, Rick Harshman touched upon the benefits that accrue from digital transformation. "Automation can play a big part in optimising resources. It aids companies to maintain operational continuity without manual intervention," he said, adding, "pandemic has accelerated tech adoption, and automation now is a crucial board priority.

In the end, automation and digital transformation aid companies and businesses in revamping themselves and ushering in significant changes on a national level. During her recent speech, while presenting the annual union budget, finance minister Nirmala Sitharaman stated that "startups have emerged as a driver of growth for our economy". Before that, Prime Minister Narendra Modi had announced that the country would celebrate January 16 as National Startup Day, as he termed startups the "backbone" of new India and the engine that will power the nation's economic growth. Suffice to say that while startups are the engines of growth, automation and technology is the fuel.