A model portfolio to survive 2016

Given the turbulence in 2015, the predictions are ominous for the markets this year too. Keeping that in mind, Forbes India has put together a portfolio of companies that can help tide over bad times

The European Rates Weekly, a research report published by the Royal Bank of Scotland, on January 8, warned about 2016 being a “cataclysmic year” where stock markets could fall up to 20 percent and oil can slump to $16 from the current $30 a barrel. The report has further said that this could create a crisis akin to the one in 2008, which is why it makes sense to stay in good quality bonds.

Now, more often than not, eight years seems to be the average gap between financial crises—think 1992, 2000 and 2008. So the trend doesn’t really bode well for 2016. The potential trouble will affect Europe and to a certain extent even the US. But, should India be worried?

The answer is yes. Global financial markets are integrated and India too will have to tread carefully. The Sensex is already down 10 percent from a year ago, and this downward trajectory looks set to continue. 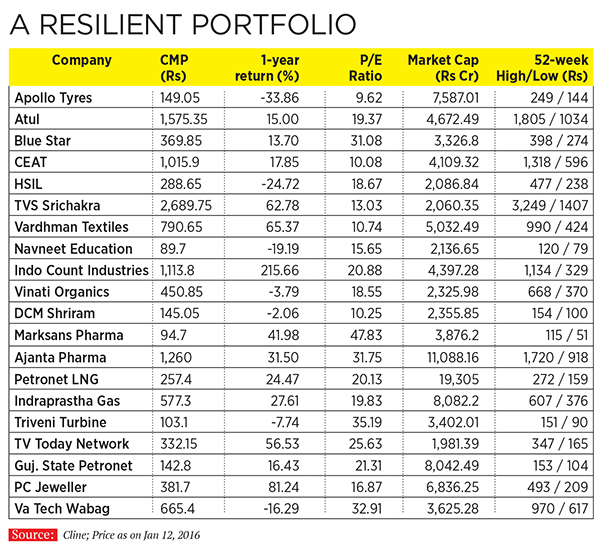 However, as of now, the Sensex is not exactly in ‘Buy’ territory as historical earnings yields are at 5 percent compared to bond yields, which are at 7.75 percent. If the market’s earnings yields rise above bond yields, or if the gap closes at least, then we have a market that will be attractive—more so, if the Sensex falls below the 20,000 mark. But that does not look likely. So far, debt funds seem to be the best option to buy into in 2016.

But this also looks like a market where you will be able to buy fundamental companies at attractive valuations. The RBS report categorically states that emerging markets remain a sell except for Indian and Eastern European equities.

In this context, Forbes India assessed companies that have been reducing debt over the last two years and, at the same time, are trying to build assets. It is not easy to reduce debt when global turmoil is playing havoc in the equities and bond markets. It is also the worst time to sell assets to raise funds to reduce debt. But some companies have managed to do this. They have strong fundamentals and if they can sustain this feat in an uncertain market, then they would be able to stay strong in a better situation. In that context, here is a list of 20 companies (see chart) that might be able to ride the tide in 2016. Some of these companies have already given a high return over the last one year and appear expensive. But during bad times, quality may not always come cheap.

Tweets by @forbes_india
We need faster global growth for commodity prices to recover: Gopal Agrawal
Stunning stadiums of the world