Aerotropolis is key to global competition

John D Kasarda has researched this development around the world, he has seen how airports are evolving from transportation and supply chain-focused areas into mixed-use commercial centers

The land of opportunity is just an airport away. And you don’t have to board a plane to get there.

The aerotropolis is a new form of airport-centric commercial development that has transformed city airports into airport cities. It positions airports as 21st century drivers of business location, urban economic growth and global economic integration. And it can spark an ailing real estate sector. 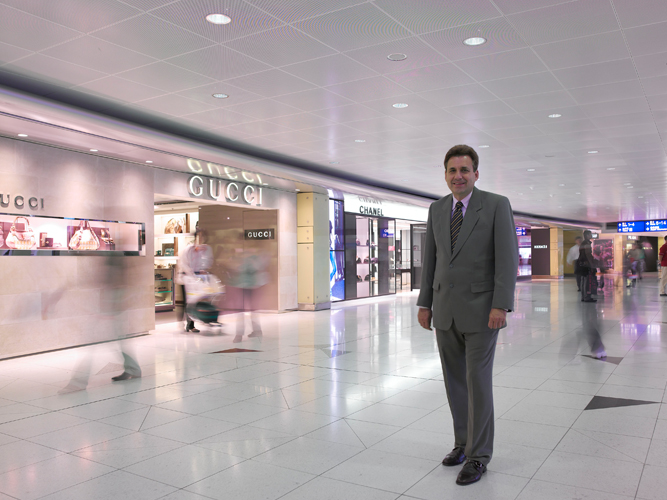 The aerotropolis is the physical Internet that ties these together
The concept was created by John D. Kasarda, is the leading developer of this idea. He is the Kenan Distinguished Professor of strategy and entrepreneurship and director of the Kenan Institute of Private Enterprise at the University of North Carolina’s Kenan-Flagler Business School.
As Kasarda has researched this development around the world, he has seen how airports are evolving from transportation and supply chain-focused areas into mixed-use commercial centers. They meet the needs of both consumers and businesses: hospitality, entertainment, retail, office, meetings, exhibitions and conventions. And as a result, real estate professionals are taking a more strategic look at emerging opportunities in airport areas.
Aerotropoli are most prevalent in Europe, Asia and the Middle East. They are taking hold in U.S. cities such as Atlanta, Detroit, Memphis and Philadelphia leverage their airport areas with strategic, multi-use developments.
Interest is fueled by the huge numbers of people—often up to 300,000 including passengers and airport employees—who converge on airports every day. But the needs of business might be the most powerful driver, Kasarda’s research shows:
• Supply chains that move the world economy
• Projected growth in tourism from Brazil, Russia, India and China (BRIC)
• Continuing need for face-to-face business meetings
• Increasing demand for fast-shipping and fulfillment
The aerotropolis is the physical Internet that ties these together. It connects a metro region to the global economy, especially flows of time-sensitive products such as microelectronics, pharmaceuticals, aerospace equipment, medical instruments, and high-value perishables. The airport and its immediate environs are central nodes in such national and global movements.
Ready for HQ or mixed-use developmentChoosing to locate near an airport that has extensive flight networks makes sense for a variety of organization types. Time-critical manufacturing, repair and distribution facilities are better able to meet their speed and agility requirements. Corporate headquarters, trade offices, professional associations and information-intensive firms with frequently traveling business people value the proximity.
Amsterdam Zuidas (AZ), located six minutes from Schiphol’s terminal, houses the world headquarters of ABN Amro and ING banks. The city of Las Colinas, just east of Dallas-Fort Worth International Airport (DFW), is the global headquarters of four Fortune 500 companies and 2,000 other firms. The Dulles International Airport area contains more Class-A office space than downtown Washington, D.C.
Employment growth and demand for commercial space in airport areas is as strong as any part of the metropolitan area, and stronger than most, Kasarda’s research shows. This creates opportunities for new development.
As more businesses set up shop near the airport, demand increases for employees. And those employees need places to live, shop and eat.
In addition to its 20-million-square-foot commercial space, AZ has more than 9,000 multifamily residences. More than $6 billion has been invested in creating residential density and commercial property in the airport area of Memphis, one of the first U.S. cities to adopt the aerotropolis model.
With a growing number of airports employing 50,000 or more workers, Kasarda’s works confirms that airport areas present a clear opening for mixed-use and multifamily developers.
High-end retailers
Big box retailers and wholesalers traditionally located near airports because land was cheaper.
Today, these sites are in demand for another reason: affluent visitors. About 30 to 90 million people visit large airports annually, which significantly outweighs the 8 to 12 million who visit malls each year. And most of them have incomes considerably greater than the national average. As a result, major airport retail sales-per-square-foot are up to five times that of malls or central business districts.

Airport terminals have immense commercial potential, Kasarda’s research shows. Concourses are evolving away from newsstands and fast food restaurants. Now they include high-end retailers, upscale eateries, meeting space and other amenities that cater to hundreds of thousands of visitors daily in the largest airports. The gold-standard is Dubai International airport, which has a 0.6-mile-long shopping corridor that raked in a cool $1.1 billion in retail sales in 2008.
New York’s John F. Kennedy International Airport leads the United States with $442 million in concessions revenue last year, growing in terminal sales despite a deep recession and air traffic declines. Number two was Atlanta’s Hartsfield-Jackson International Airport at $349 million in terminal sales, also up from 2007. The number of passengers going through Atlanta’s airport terminal was just over 90 million in 2008. That’s more than twice the total number of annual visitors to Disney World, the Grand Canyon and Graceland combined.
Kasarda’s analysis indicates that airport terminals are an increasingly profitable option for higher-end retailers and restaurants, given many travelers’ incomes and greater sales per square foot.
Hospitality development
Another growth opportunity is airport-centered hospitality. Newly affluent BRIC citizens are expected to travel extensively, with the United States as a top destination. Plus, U.S. executives continue to rely on air travel for business development and negotiations.
London Heathrow’s Sofitel Lux Le Grand hotel competes with downtown London five-star facilities. It attracts wealthy international and extended-stay business travelers with 45 meeting rooms and a convention center accommodating 1,700. The property is the U.K.’s third-largest conference venue.
In the United States, DFW’s Grand Hyatt serves as a fly-in virtual headquarters for companies and executives seeking a central meeting location. The hotel has 34,000 square feet of function space, 45 meeting rooms and 20 conference suites. Los Angeles International (LAX) has the largest concentration of hotel rooms on the west coast.
Kasarda’s work shows potential for hotel development or acquisitions on or near airports as the economy recovers. These properties have seen less revenue erosion than their non-airport counterparts, making them strong long-term prospects for return on investment.
The United States lags Europe, Asia and the Middle East in airport-linked commercial development.
But as governments begin investing more in the transportation infrastructure—thanks, in part, to federal stimulus funding—new attention is focusing on airport areas. Opportunities exist for developers and corporate real estate executives to position investments to take advantage of the likely strong rebound in commercial aviation as global economies recover.
Fast Company magazine captured Kasarda’s passion for the aerotropolis, which in turn led to writing a book, Aerotropolis, scheduled for 2010 publication. Read more about his research at www.aerotropolis.com.
What makes a good aerotropolis?
Kasarda says an efficient aerotropolis should:
• Have seamless multimodal surface connectivity between the airport, downtown and major commercial nodes in the region
• Site businesses in relation to their frequency of use of the airport
• Locate noise- and emission-sensitive commercial and residential developments outside high-intensity flight paths
• Create cluster rather than strip development with green space in-between
• Develop mixed-use commercial/residential communities where airport and airport-area employees can commute easily to work while residing in affordable, human-scale neighborhoods. Five questions real estate execs should ask when evaluating on-airport or near-airport projects:
• For on-airport investment, what innovative financial instruments can be developed between the airport and the real estate investor to better share short and longer-term risks and returns to supplement traditional ground leases and concession fees that characterize most airport property investments?
• Since airport accessibility is one key to airport area real estate value, how do various aerotropolis locations measure up in terms of the time and cost of getting to and from the airport?
• What opportunities exist during this real estate downturn for strategic acquisition of commercial properties in the airport area such as hotels, office buildings, and distribution centers?
• For new commercial facility investments, are there sufficient “rooftops” within easy commute to the immediate airport area to ensure that tenant firms can cost-effectively attract the labor supply they need?
• How can airport area real estate investors encourage coordination of complementary investments essential for successful airport area multiuse development?

(John D.  Kasarda is Director of Kenan Institute of Private Enterprise and Kenan Distinguished Professor of Strategy and Entrepreneurship)