In the equity lending market, big investors like mutual funds receive fees from short sellers when they lend their shares to them

Billionaire investor Warren Buffett famously said, “In the short run, the stock market is a voting machine, but in the long run, it’s a weighing machine.” Put differently, over the course of days, even weeks, the market measures popularity, but given enough time, it accurately assesses any stock’s value.

Adam Reed would add this proviso: The weighing machine won’t work as efficiently as possible unless investors are free to sell stocks short. 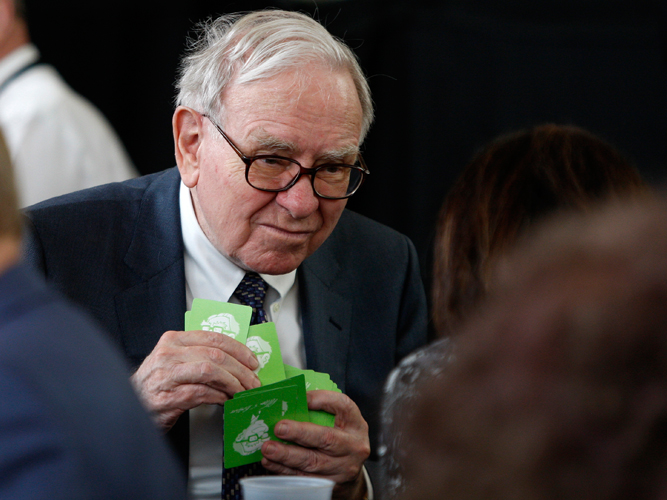 Image: Carlos Barria / Reuters
Billionaire investor Warren Buffett famously said, “In the short run, the stock market is a voting machine, but in the long run, it’s a weighing machine.”
Reed is an associate finance professor at the University of North Carolina at Chapel Hill’s Kenan-Flagler Business School.
Without short selling, a stock’s price doesn’t promptly reflect all the pertinent information about the company that issued it, Reed’s research has found. And if short selling is limited, price adjustments, especially negative ones, will be more extreme when they do happen, like when critical details do emerge, he says.
Someone who sells a stock short is trying to profit from a drop in its price. To do that, she sells it at today’s price and then agrees to borrow the stock from someone else and deliver it to her buyer within three days. Her hope is that the stock’s price will fall before she buys the stock to close her position. Ideally, when she’s ready to hand over the stock, she buys it, gives it to the person who previously agreed to lend it to her and pockets a profit—the difference between the initial sale price and the amount that she paid for the shares.
If she’s wrong and the stock has risen, she ends up losing money because she’ll have to pay more for the shares than she’ll make on her sale. Investors short a stock when they think it’s overvalued because other investors are, say, ignoring accounting irregularities or new competition.
Short selling has long carried the odor of disrepute on Wall Street; some folks simply don’t like it, believing that it’s somehow wrong to bet that stocks will fall. “There’s a sense that it’s better to hope something goes up than down,” Reed says. “Shorting seems evil to some people.”
In the equity lending market, big investors like mutual funds receive fees from short sellers when they lend their shares to them. But some of them still refuse to do so, both out of their distaste for short selling and out of concern that they’re, in effect, pushing down the value of their own holdings.
“They think that, if they lend their shares, it enables the short seller to sell the share and that will drive down the price,” Reed explains. “It is true that a short sale could push the price down. But it’s probably a small effect, and it will eventually go away.”
The downward pressure dissipates when the short seller has to close out her position and either pocket a profit or pay up.
Last year, short selling hit the headlines in a way that it rarely does. The U.S. Securities and Exchange Commission banned shorting for about 1,000 financial stocks, claiming that it was contributing to their plummeting prices. The decision was controversial at the time—many investors and finance scholars regarded it as foolish—and it remains so today.
The move should have been controversial, according to Reed’s research. Regulators might have hurt investors in these companies—and, arguably, any potential investor—when they limited shorting. Without shorting, the stocks no longer fully reflected all available information about them and thus might have been mispriced.
“What the SEC did was blame the short sellers for the price declines,” Reed says. “But all the bad news [about subprime mortgage defaults and bank insolvencies] was enough reason for the declines. The SEC said that it was worried that people were spreading rumors about Lehman Brothers at the same time that short selling was going on. Instead of prosecuting the firms that they suspected of doing that, they made it illegal to do any short selling at all. I don’t think that’s a good idea because it’s making the prices of all of these stocks inaccurate.”
If anything, Reed says, regulators need to make shorting easier, not harder.
“I’d try to eliminate constraints on short selling,” he says. “I’d focus on the equity lending market. It’s hard to find prices there, and they’re probably higher than they should be. You could create an exchange or have some electronic network that shows the price histories. This is a very inefficient corner of the market.”
A more transparent equity lending market would contribute to the stock market’s overall efficiency. And everyone—investors and firms—should benefit if stock prices adjust quickly to changing information.
Reed’s belief in the key role for short sellers prompts him to argue that mutual funds, pension funds and insurance companies should drop their reluctance about equity lending and offer their shares to short sellers as opportunities arise.

“Since this work demonstrates that increasing the supply of shares for lending will increase informational efficiency and reduce volatility on [earnings] announcement days … increasing equity lending improves market quality,” he writes. “In addition to participating in the income generated from equity lending, mutual funds can increase the informational efficiency and reduce the risk of stocks held in their portfolios by participating in the equity lending market.”
In other words, they can help themselves by helping short sellers—and even earn a little income in the process.
(Adam V. Reed is Julian Price Scholar in Finance and Associate Professor of Finance at UNC Kenan-Flagler)