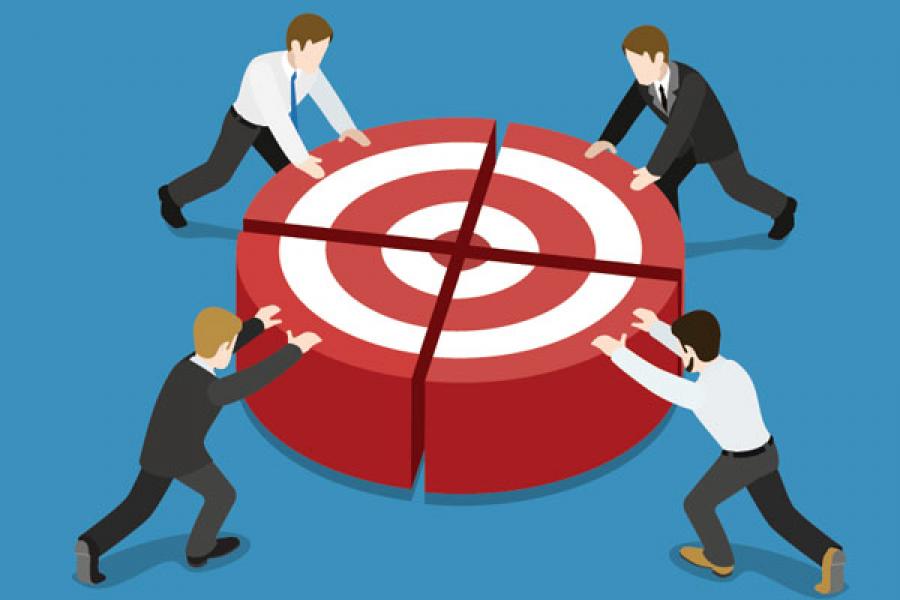 Imagine you have a critical but complex business problem. You put together a cross-functional team — Harry from finance, Jane from marketing, Sydney from R&D, Patrick from HR and Catherine from sales – to address it.

You give the group three months to develop recommendations and report back to you.

They have a common goal, but the team could be derailed – or be less effective – if members fail to put team priorities ahead of their personal goals.

Harry is gunning for a big promotion in his department. Catherine is worried about whether her regional sales team is going to make its goal this quarter. Sydney is on the team only because her boss “volunteered” her for it, largely because no one else in the department wanted any part of the project.

To help the team coalesce around the challenge you gave them, you pay for the team to go to a mountain conference center for a weekend retreat where they’ll do a ropes course together and battle teams from other companies in a paintball tournament.

Will the bonding experience help the team be effective?

Maybe not, according to research by Matthew Pearsall, an organizational behavior professor at UNC Kenan-Flagler, and Vijaya Venkataramani of the University of Maryland, College Park.

The pair studied how well 56 student teams performed together based on the degree to which they identified with their teams and the extent that they were oriented toward learning about each other. They also explored how teams can accomplish team goals without getting derailed by individual priorities.

They write about their findings in “Overcoming Asymmetric Goals in Teams: The Interactive Roles of Team Learning Orientation and Team Identification” in the Journal of Applied Psychology.

“What might be surprising to many managers is that team identification didn’t have a lot of effect by itself,” Pearsall says.

That’s because feeling like part of a team isn’t enough. Individuals also must understand each other’s goals to better accommodate conflicts between individual aims and the team’s objectives.

For example, a team member from marketing might need to increase product market share in the next quarter, while a team member from finance needs the product to realize a certain two-year R.O.I. Meanwhile, the team as a whole needs the product to “be successful” without clear external guidelines as to what constitutes success. If they recognize these underlying concerns and the different time frames of the conflicting goals, this recognition might allow the team to design a sales strategy that meets both the marketing and finance needs while claiming collective success. But if team members don’t understand the differences in their goals, the team is likely to devolve into conflicts over specific, competing plans and ultimately meet none of their individual or collective objectives.

The researchers say that just because a group of people feels like a team, they might not share their personal aspirations and, as a result, might not uncover potential conflicts. Team members must be collectively predisposed towards discovering information about one another and their collective task. Pearsall and Venkataramani call this attribute of the team “learning orientation” – and it’s one of several factors affecting team performance, which they measured in an experiment.

Studying how teams work
The researchers split 280 undergraduate business students taking an introductory management class into 56 randomly assigned groups of five students each. Students received team assignments at the start of the semester. Half the teams were assigned to a control group and half to a high team-identification group.

Eleven weeks into the semester, having worked on various class assignments in teams, the students completed team learning and team identification assessments designed to reveal to what extent each team was oriented toward learning and to what extent individual students identified with, or were a part of, their teams.

A week later, the 28 teams in the high team identification group got a brief lecture about the importance of team commitment and identification for effective performance. They then competed in a contest to see which team could build a paper airplane that flew the farthest. They also were asked to create a team name and make a banner or flag for their team.

A week after that, all of the students took part in a computer simulation. Individual students played the roles of members of an expedition climbing Mt. Everest. Team members could talk to each another during the simulation. Each student had individual goals, but teams competed together to see how many total goals they could achieve.

After the simulation, students were assessed again – this time to see how aware individual members were of their teammates’ goals and to what extent they tended to collectively plan their work on group projects.

Ensuring teams work
The experiment showed that teams with high degrees of team identification – meaning members had strong feelings of belonging to a team – didn’t necessarily perform significantly better than other teams.

Team learning orientation – the extent to which team members were likely to learn about and understand each other’s goals – by itself had a slightly larger effect on performance than team identification, but not much.

However, teams that scored high in both team identification and team learning orientation did significantly better on the simulation.

So when teams feel closely connected and have had the opportunity to learn about each other’s goals, they are more likely to understand the role each team member plays and are more likely to plan their work together, based on data from the experiment. That, in turn, enables the team members to maximize their individual and collective goal attainment, leading to stronger performance.

The results, Pearsall says, are especially relevant for temporary, cross-functional teams. Teams that work together for very long periods – members of a particular corporate department, for example – are more likely to have the mutual understanding that contributes to effective teamwork.

For managers, the research suggests that team bonding isn’t enough, by itself, to ensure team performance.

Instead, team members should take the time to learn about each other’s goals, aspirations and values. They also should take time to plan how they’ll work together on the project.

“Take that time before you do work to talk about these issues, get them out there, define success criteria and say, ‘OK, great! How are we going to approach this?’” Pearsall says. “It’s much easier to circumvent conflict than to resolve it."