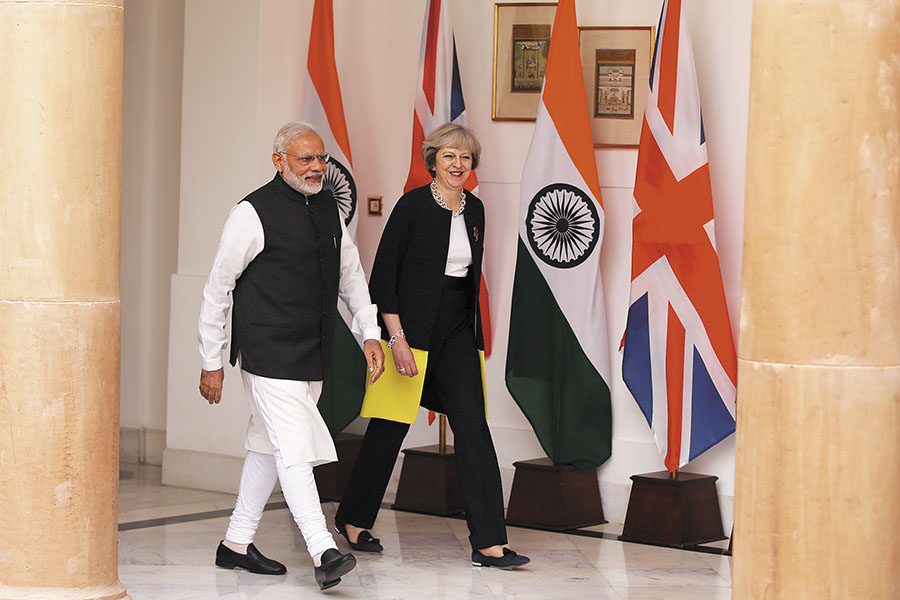 UK Prime Minister Theresa May was in India for a three-day trade visit in November, her first bilateral trip outside Europe after becoming PM
Image: Adnan Abidi / Reuters

On november 7, a day before the demonetisation drive made headlines, UK Prime Minister Theresa May arrived in India for a three-day trade visit—her first bilateral trip outside Europe after assuming office in July this year. The visit is an indicator of the UK’s effort to look beyond Europe post the referendum to leave the European Union (Brexit) and at countries that will matter most in the years to come.

And figures show that India has been one of the fastest growing countries in the world. India’s GDP crossed $1 trillion in 2007 and doubled to $2 trillion in 2015. It is projected to be around $5 trillion in 2025, as per estimates of asset management and advisory firm ZyFin. Besides the growth rate, what makes India an attractive trade destination are the favourable demographics—65 percent of the country’s 1.3 billion population is below the age of 35, ZyFin data show.

“It is vital that India and the UK work together to define the knowledge economy of the 21st century,” said Prime Minister Narendra Modi at the inauguration of the India-UK Tech Summit which was aimed at enhancing Indo-UK ties in diverse areas including trade, investment, defence and security. Several corporates and small- and medium-sized enterprises from the UK that are keen to tap into India’s impressive growth story attended the event, while companies across sectors in India evinced interest in the UK economy too. “I believe the UK and India have a great opportunity for collaborative work in pharma and research. India, on its part, needs to develop an ecosystem for ease of doing business,” said Habil Khorakiwala, chairman of pharmaceutical and biotechnology company Wockhardt at the event.

According to a report jointly published by Grant Thornton and the Confederation of Indian Industry (CII), the total turnover of the fastest-growing Indian companies in the UK in 2015 rose 18 percent to over £26 billion (around Rs 2 lakh crore) from £22 billion the previous year. To a large extent, the impressive rates of growth demonstrated by these companies reflect the fast-growth sectors in which many of them operate—notably technology, telecom, pharmaceuticals and financial services.

Both Modi and May stressed on how India and the UK can leverage technological prowess to create new opportunities. “Together, we can create a vibrant and thriving environment for new commercial applications with breakthrough technologies,” said Modi, highlighting India’s growth story and the opportunities it offers foreign investors.

May, on her part, outlined her agenda. While the first point was to identify business opportunities, the second was to look at each other’s priorities as “own priorities”. Also, with India undertaking large programmes such as Make in India and Digital India, and the UK expanding its economic and social reforms, the two countries must support each other, she said. “It is important to break down barriers and make it easier to do business. We are helping India improve its ease of doing business but I am determined to go further,” she added.

Experts say the investor-friendly policies put in place by India’s government positions the country to take advantage of opportunities and in turn promote greater economic and commercial ties.