How Power2SME leveraged the power of small and medium enterprises by growing seven-fold in four years and is within striking distance of ₹1,000 crore in revenue. The next target: ₹5,000 crore by 2021 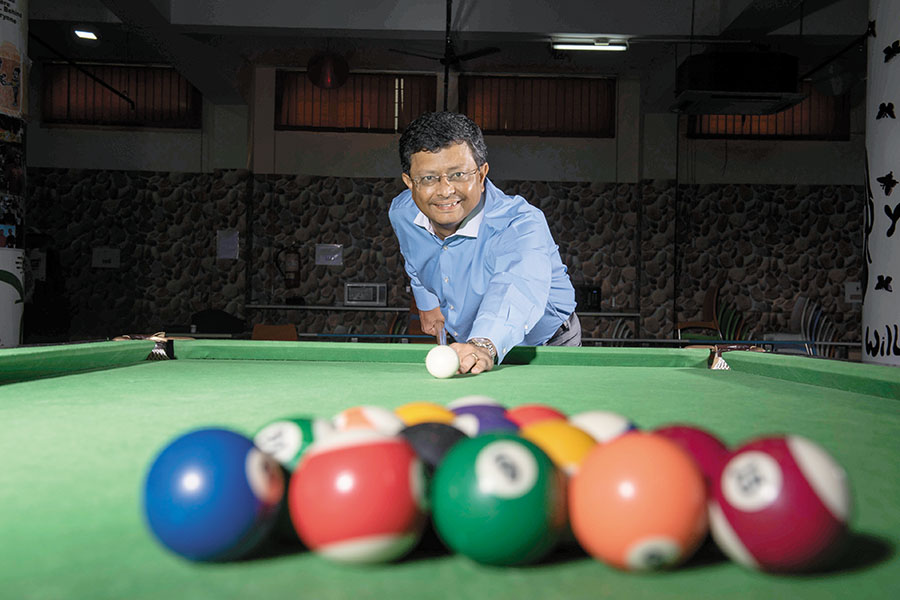 It was a double whammy for R Narayan. What heightened the pain was the timing of the second blow—the Goods and Service Tax, or GST—just seven months after demonetisation in November 2016. Though the twin unprecedented fiscal steps—demonetisation and GST—did a world of good in formalising and streamlining the highly fragmented SME sector, the initial impact was something which neither the CEO of Power2SME nor the segment he was catering to was prepared for. “If demonetisation was a Black Swan event, GST was a big elephant in the room that nobody could figure out. Small and medium enterprises (SMEs) were in a state of disarray,” recounts Narayan, also the founder of the online marketplace for SMEs. 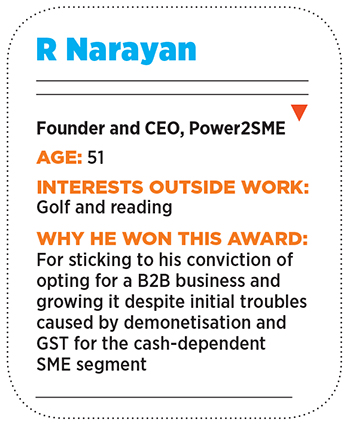 “Both badly hit collection of dues from the SMEs,” Narayan adds, pointing out how the business, which was largely based on credit, went into a tailspin. Before demonetisation, he says, the collection period hovered around 27 days. “It jumped to 71 days post demonetisation. And, initially after GST, production cycles went for a toss,” he rues. For a company that had posted an over-12-fold revenue growth since the March ended fiscal 2014, to touch ₹796.8 crore three years later, it seemed that the worst was around the corner.

Power2SME, founded in January 2012 and backed by marquee investors like Inventus, Kalaari Capital, Nandan Nilekani and International Finance Corporation, survived the crises. Growth sustained, albeit at a slower pace. The startup, which has raised $60 million (roughly ₹430 core at current exchange rates) in funding, closed fiscal 2018 with revenue of ₹950 crore. Though losses still remain, they haven’t gone out of whack; Narayan doesn’t disclose the number, but lets on that they haven’t ballooned from the previous fiscal’s ₹12 crore. “The company will turn profitable in fiscal 2019 (current fiscal),” he asserts, adding what helped the startup most during the tough times was an inward focus.

‘Keep your eyes on what you do. Don’t worry about what the world is doing’, reads a poster on the walls of the corporate headquarters of Power2SME in Gurugram. The quote is attributed to Narayan. There are more inspirational one-liners hung across the expansive double-storied building. ‘A captain is only as good as his team’ is another one. Narayan agrees. Power2SME, he reckons, is not a one-man show. “I have been fortunate to have been able to put together a good team,” he contends, adding that around nine members of his senior management team were handpicked by him and they have been with the company since inception. “This is not the typical startup where you see high attrition,” he chuckles. “All are here to build a great company.”

For Narayan, the trigger—and experience—to foray into the B2B sector came from working in a slew of companies before taking a plunge into entrepreneurship. “It was not easy,” he recounts. Leaving a cushy job at Microsoft and turning entrepreneur at 32 was perceived foolhardy by many around him. Narayan, though, was strong-willed in living his dream.

For a man who spent most of his working life in Kolkata, staying away from the merciless grind of cities like Delhi and Mumbai helped in coping with pressure. It also aided in living up to one’s own expectations. The advantage of working in Kolkata, Narayan points out, was that the market was small. So targets were not only met but also overachieved. The stocky entrepreneur continued with his stellar performance in Delhi when Microsoft asked him to relocate. “We grew the company to over $40 million in about four years,” he recounts. It was the growth at Microsoft, where he worked closely with SMEs, that egged Narayan on to start his own venture.

Denave, an IT services company started in 1998, was Narayan’s maiden venture. “At Denave, we perfected the art of reaching out to SMEs.” The company worked for giants such as HP, Cisco, Microsoft, Samsung and Nokia, establishing their channel network and looking after their SME sales. Though aware of the plight of SMEs in terms of financial and operational limitations, it was not before 2010 that Narayan realised the need to set up a venture that catered to the needs of this segment of the business population. “They were getting a raw deal.”

A deep dive into the life and financial trials of an SME in 2010, in collaboration with IIM-Lucknow, made him realise the need to start Power2SME. ‘Between 65 and 85 percent of an SME’s wallet went into buying raw material’ was one of the findings of the study. “We knew if we could give value to SMEs in sourcing, we would stand a chance in cracking this business,” he says. Power2SME was flagged off in January 2012. 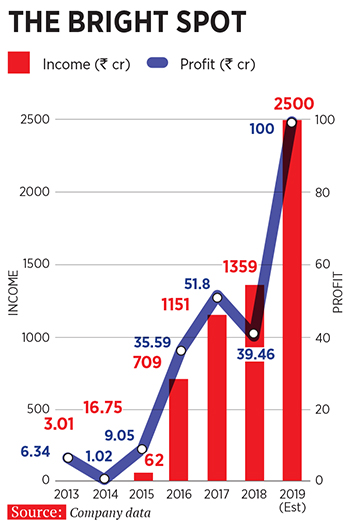 Narayan started with an SME segment notorious for its lack of transparency and payment woes: Construction. The options were two-fold. Either pick up an easy problem, build a fairy tale and confront the monster later, or discover and take the devil head on. Narayan opted for the latter. Within five months, the company had posted sales of ₹50 lakh. “We put together an ecosystem for the SMEs so that they could focus on productivity and sales,” he says. A sub-vertical enabling financing for SMEs was also started over the next few years. As was a section to cater to the MRO (maintenance, repair, operations) needs of the SMEs.

From procurement of raw material to financing to service needs, SMEs became the fulcrum around which everything moved quickly. From a modest ₹59.3 crore in revenue in FY14 to ₹309.9 crore—a five-fold jump—in FY16, the pace was startling. There were no profits to show, but the red ink was never alarming—₹8.3 crore in FY16 and ₹12 crore a year later.  Meanwhile, Power2SME has expanded from eight to 18 states in the past eight months.

SMEs, the ones like Accurate Strips & Tubes in Bahadurgarh, Haryana, are happy with Power2SME’s scale of growth. For Rachit Gupta, founder of Accurate Strips & Tubes, getting a source of high-quality raw material at competitive pricing is the biggest blessing. “This has helped me cut cost, expand production and get credit at a flexible repayment option,” he claims.

Rapid growth for Power2SME, though, came with its share of mistakes. The most notable one was floundering on supplier analysis. “SMEs and the suppliers are equally cash-starved,” shrugs Narayan. Power2SME miscalculated the working capital gap between the two. “It took us a good two and a half years to fix this problem.”

Another mistake was on the talent front. Not everybody had an aptitude for a B2B startup. “Few believed in B2B. Most chased B2C.” Narayan, however, was firm in his conviction. B2B, he asserts, is easier to scale, doesn’t burn much cash and the road to profitability can be hit quickly.

Another positive of a B2B venture is that business can grow on its own without a funding ventilator. “There are companies that have raised either $600 million or $6 billion. Our number stands at a mere $60 million,” he grins. Though startups get noticed because of an expanding topline, it’s eventually a healthy bottom line that will help them stay in the game, he adds.

The learning came from another mistake made early in the journey. Narayan, spurred by the desire to scale rapidly—scale fast and fail fast—spent ₹8 lakh per month for a couple of months to generate business leads through digital marketing. Leads started pouring, but did not convert into business. The SMEs looked for value for money when it came to procurement rather than advertising or any other metric. The lesson was learnt quickly. “We could have easily made the mistake of spending valuable dollars on marketing and advertising. But it takes you nowhere,” he reckons.

For Power2SME, the next target is crossing the ₹5,000-crore revenue mark and an IPO by 2021. Doable? Narayan sounds optimistic. “We just need to stay focussed on our work, and not worry about what the world is doing,” he says. That may well have helped Narayan make his SME-focussed business extra-large.