Take that mantle and make the most of the opportunities: Radhika Gupta, MD & CEO, Edelweiss AMC, advises next-gen women leaders

Radhika Gupta, one of the youngest CEOs in the mutual fund sector, has increased Edelweiss' AUM from Rs 6,000 crore to Rs 80,000 crore in five years and is gunning for the Rs 1 lakh crore mark 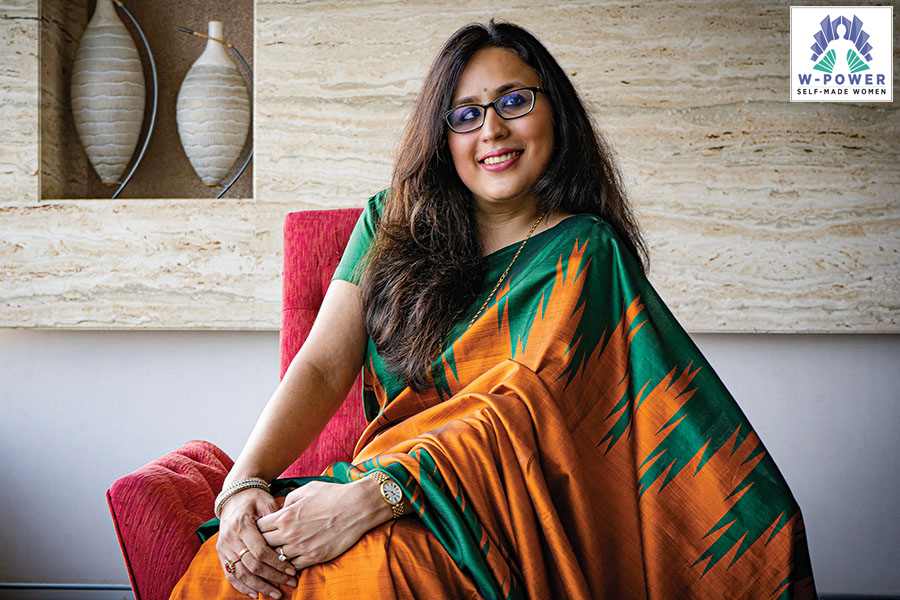 Why are you hiring me?” This is certainly not something anyone would ask right after getting a job in a top management consulting firm. But Radhika Gupta did. After facing seven consecutive job rejections in her early 20s, Gupta slipped into severe self-doubt. But the eighth opportunity at McKinsey came as a saviour. “We are hiring you because you are different and unique,” said the employer.

Born in the diplomatic quarters of Pakistan, Gupta has had a rollercoaster journey and today she’s the managing director and CEO of asset management company Edelweiss. Before permanently moving to India, Gupta lived in different countries as her father was an Indian diplomat. In 2018, the talk that she delivered at Reliance GCS Connect, regarding her success story, went viral. In it, she spoke about how, right after being born, Gupta was placed in a hospital incubator in the wrong position, due to which her neck became permanently deformed. Consequently, she faced a lot of rejection in her childhood. However, she defied all odds and became one of the youngest CEOs at the age of 33, and is now the only woman CEO in India’s mutual funds industry. 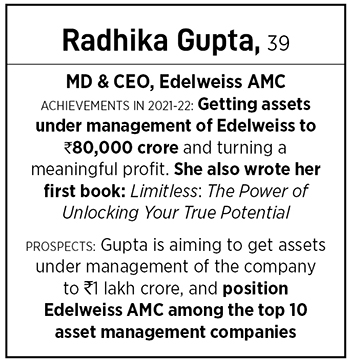 A graduate of management and technology from the University of Pennsylvania, US, Gupta has joint degrees in economics from the Wharton School and computer science engineering from the Moore School. At 22, she started her career with McKinsey & Co, and served as a hedge fund manager at AQR Capital before moving to India in 2009 to start her own venture Forefront Capital Management. “It was not a great time to start the business; the financial crisis of 2008 had just happened. But I still look a leap of faith and moved back to India and founded this company with two partners. There were many ups and downs but eventually things turned out to be fine,” recalls Gupta who invested ₹25 lakh from her savings into the business, which became ₹2 crore a year later. Her asset management firm was acquired by the Edelweiss Group in 2014.

Under her leadership, Edelweiss AMC’s assets under management (AUM) grew from ₹6,000 crore in 2017 to ₹80,000 crore in 2022. With no prior experience in mergers and acquisitions, Gupta helped the group acquire JP Morgan’s Indian mutual fund business and Ambit Capital’s alternative investment funds business, and the integration thereafter in 2016-17. An ardent bridge player, Gupta is always on the lookout for something new and breaking new ground. She is now aiming to get Edelweiss’ AUM to ₹1 lakh crore.

Gupta recently became a mother and resumed work after one and a half months. “I chose to come back to work because I think I have twins, and there’s no question of loving one child less than the other. One child happens to be 17 years old, which is my career, and another child happens to be four months old. And I’m sure a mother can balance both children,” she says. Apart from hitting new milestones in the company, Gupta also wrote her first book, Limitless: The Power of Unlocking Your True Potential, in which she shares life lessons and insights to build one’s career, drawing from her personal experiences.

“Edelweiss’ AUM has touched new highs under her excellent leadership, which is nothing less than conquering Mount Everest. However, what fascinates me more is how she overcame all of the obstacles and hardships she encountered as she was growing up. Hats off to her unwavering attitude,” says Rishabh Parakh, founder of NRP Capitals.

Gupta’s advice to the next generation of female leaders: “Your previous generations have worked very hard to open up more opportunities for you in today’s India. So take that mantle and make the most of the opportunities.”

Tweets by @forbesindia
Infosys at 40: 'No Plan B,' but the 3Rs, being in the sweet spot and the power of faith
From a pet project to a massive brand, the tale of Rashi Narang's 'paw'sitive journey