From a pet project to a massive brand, the tale of Rashi Narang's 'paw'sitive journey

At 24, Rashi Narang started Heads Up For Tails which makes products—toys, clothes, food—for cats and dogs. The brand now has close to 75 retail outlets and 30 spas for pets 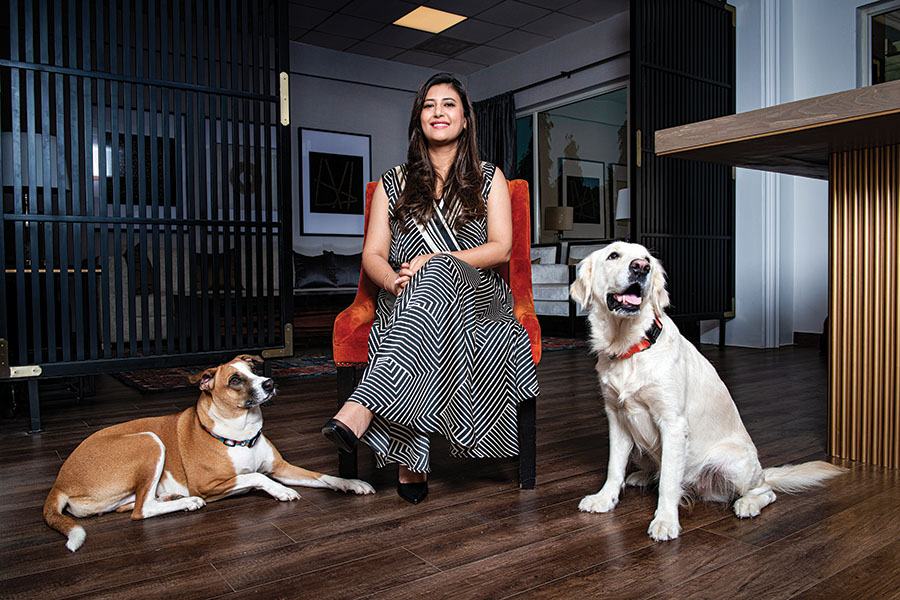 At 24, pet lover Rashi Narang started Heads Up for Tails (HUFT) from a spare room in her Delhi home. When Sara, her pet Labrador, came into her life in 2008, she realised that there were barely any products—food or toys— in the market for her. It was then that she started experimenting—creating anything that she could build easily like soft furnishing, toys or clothes.

“No one had done something like this before in India. While it was exciting in many ways, it was also a complete blank canvas, there was no supply chain, no products, no vendors… we had to start from scratch,” recalls Narang. What started as a small business has now turned into a massive brand with close to 75 retail outlets across India, clocking in sales of ₹140 crore in FY22.

In the early days, when Narang approached vendors, no one knew how to build products she had in mind and, she laughs: “A lot of vendors were offended because I was asking them to build products for cats and dogs.” She took her products to close to 200 pet stores, and all of them refused to keep them because “they won’t sell”. Finally, Narang began selling to consumers directly—either via pop-up stores or a small store. Gradually, as customers started getting the right education, HUFT expanded by selling on its website. 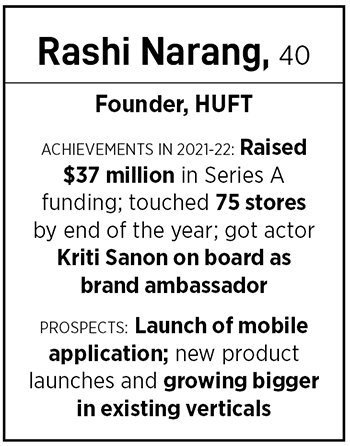 In 2009, Narang’s husband got a transfer, and she had to move out of the country. “I continued running the business, but remotely. We had a very small team and no funding… those few years felt like a very dark tunnel, and I just couldn’t find light,” she adds. She came back to India, and in 2016, there was a merger between HUFT and Bengaluru-based Paws, The Pet Store when Sandeep Atmaram and Ridhima Coelho came on board as co-founders of HUFT.

Narang and her team also got a few HNI investors on board around the same time. “These were people who understood the larger vision and weren’t looking for a quick return on their investment. They were in for the long term, and believed in our business model,” says the human resources professional-turned-entrepreneur. In 2021, the startup raised $37 million (₹277 crore) in a Series A funding round led by Verlinvest and Sequoia Capital.

“Verlinvest has always been very bullish on the pet industry globally and this conviction has only increased since the pandemic, which accelerated pet adoption. Heads Up For Tails has been ahead of the curve as a leader in the Indian pet market,” says Arjun Anand, executive director, Verlinvest.

When Narang took her dogs to spas, her experience was terrible. Through HUFT, she wanted to bring about a change in the ecosystem. In 2017, HUFT opened its first spa in Bengaluru and currently has 30 across 10 cities. “We recruit people and train them from scratch to become groomers; we teach them everything to do with dogs and cats, how to communicate with them, body language etc,” Narang explains, “For instance, at most spas, they put a muzzle on your dog… it traumatises them. So we train our groomers to handle pets the right way.” It’s a challenge to find groomers, though, as it isn’t considered a serious profession in India yet.

A majority of HUFT’s revenue comes from its range of products, sold via its omnichannel approach. Currently, offline sales account for 60 percent and the rest online. Offline was a key piece in the growth, explains Narang. “Most pet stores back in the day would stink… there would be rodents everywhere. We wanted to change that, and turn visiting our stores into an ‘experience’.”

From the beginning, Narang has innovation at the centre of the business. Through constant feedback, the team tries to look for solutions to problems. “For instance,” she explains, “a lot of our customers spoke about how tough it is to clean up pee, especially for puppies. That’s when we introduced a pee-lock powder, which converts the pee into crystals and you can just sweep it out.”

For now, Narang wants to continue growing deeper in existing categories. The pet lover set up the HUFT foundation in 2017, which runs grassroots programmes, including sterilisation drives, feeding programmes, adoption drives, both independently and in collaboration with other NGOs.

“Looking back,” she says, “I was only 24 when I started. I had no funds to bring on board experts… I couldn’t afford high salaries. That expertise probably would have helped. But then, here we are—we built our own path and solutions. It has been an incredible journey, and we’re just getting started.”

Tweets by @forbesindia
Take that mantle and make the most of the opportunities: Radhika Gupta, MD & CEO, Edelweiss AMC, advises next-gen women leaders
Photo of the day: Into the final they go