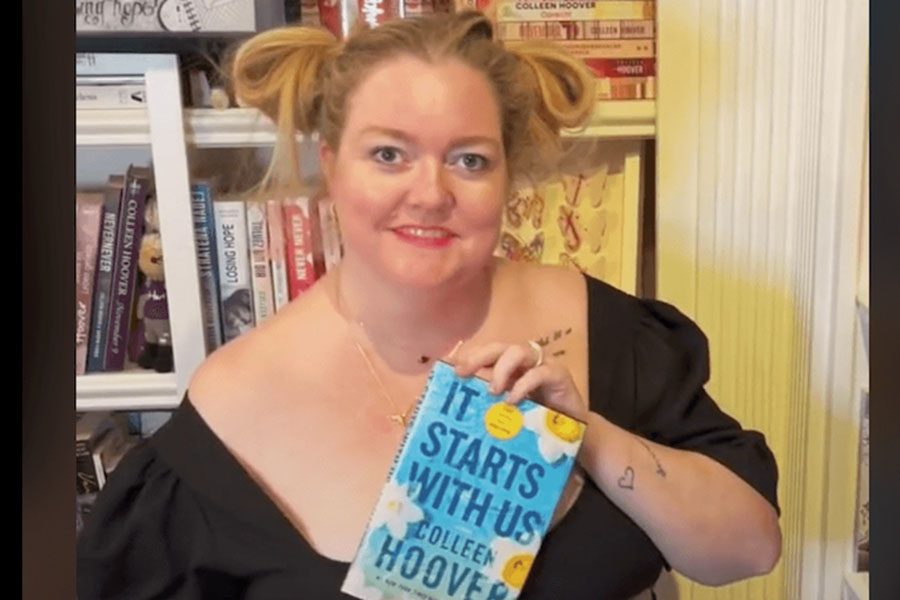 For several months now the name "Colleen Hoover" has been on the lips of movers and shakers in the book industry. The Texas writer has become a stunning textbook example of how to build a following in the category of "young adult" books with her love stories that are a runaway hit with teenagers and young adults. And we can't talk about her success in bookstores without also talking about social networks and BookTok in particular.

Contrary to what their elders may think, the younger generations are indeed reading books. You just have to visit BookTok, the section of TikTok dedicated to literary recommendations, to see the scale of the phenomenon. Teenagers and young adults are keen to take to the platform to talk about the books they like, such as "The Song of Achilles" or "Slammed."

"Slammed" is a book by Colleen Hoover, written in 2012. The Texan writer chose to self-publish this romance between Layken, an 18-year-old woman, grieving her father, and Will, a poet two years her senior. At the time, it was an immediate success, and "Slammed" featured on the New York Times best-seller list.

Before this success, few would have predicted that Colleen Hoover would become a best-selling author on an international level. The 42-year-old novelist from Texas worked at various jobs in the fields of social work and teaching before pursuing a writing career following the publication of "Slammed."

The author of over 20 books and stories has seen a similar trajectory with the titles that have followed her first novel. Six of them are on Publishers' Weekly's bestseller list for the week of August 7. Some of them, such as "It Ends With Us," "Verity," and "Ugly Love," have also been on the Times charts for many weeks. And this phenomenon goes beyond the borders of the United States since Colleen Hoover has sold 500,000 copies since the beginning of 2022 in Brazil, according to Veja. That's more than J.K. Rowling, whom the magazine describes as the favorite novelist of Brazilians.

Colleen Hoover's popularity has particularly soared in the last two years. The reason? BookTok. The hashtag #colleenhoover has 1.9 billion views on the social network. The official account of the author counts more than a million followers who can see previews of promotional videos for her latest books and other, more anecdotal videos about her life.

This unique approach to PR helps fuel the demand for her literary creations, according to author duo Christina Lauren. "She is playful, messy, honest, and sarcastic — but her sarcasm never carries an edge of malice or defensiveness," they told ELLE magazine.

In the path of "After"

TikTok's demographics also work in Colleen Hoover's favor. Her heroines are often between the ages of 18 and 26, just like most women using the social network. This age group represents nearly 24% of the platform's total users worldwide, according to the website Statista.

Its young readers tend to identify strongly with the protagonists whose adventures they follow. One of them, known on TikTok under the pseudonym @megreadz_, had fun imagining which actors could play the characters of Colleen Hoover's novel, "Verity."

Others prefer to speculate about the future casting of the adaptation of "It Ends With Us." Wayfarer Entertainment acquired the film rights in 2019 and this summer gave a dozen loyal readers of the novelist a sneak preview of the film's script. While the studio has yet to reveal a release date, it's a safe bet that "It Ends With Us" will follow in the footsteps of another successful "young adult" literary series, Anna Todd's "After." BookTok is buzzing.

Tweets by @forbesindia
Studies to see if mutations behind monkeypox spread: WHO
'Street scientists' in US communities are mapping heat islands