From suits to denim to glitter: 10 incoming fashion trends for 2023

After Barbiecore, Y2K and workwear, here are the 10 fashion trends that will help you step into 2023 with style 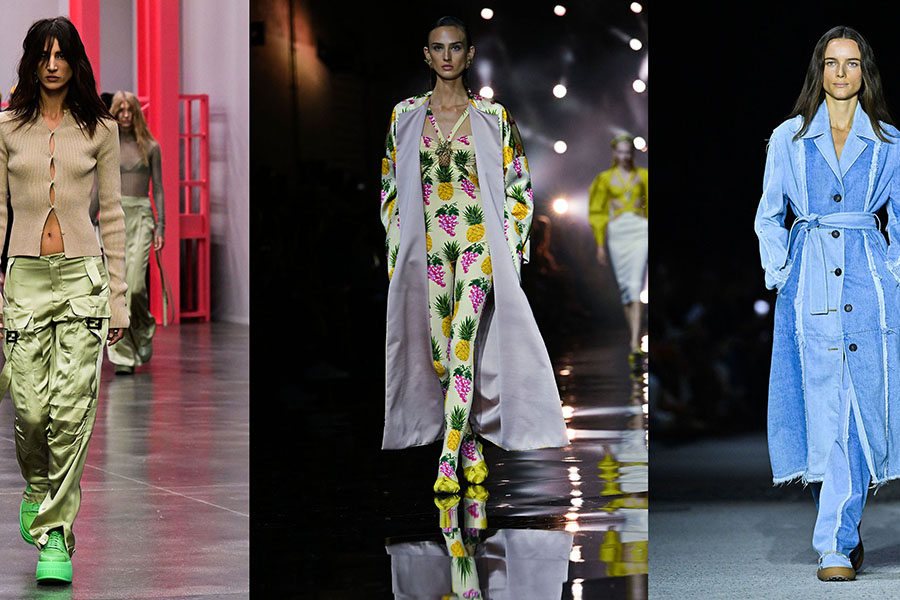 Utility wear, playful prints and denim will be among the top fashion trends for 2023. Photography Miguel MEDINA / Filippo Monteforte / AFP

What will you be wearing in 2023? While climate issues could put a brake on fashion's fast-changing pace, trends remain essential in setting the tone for each new season. After Barbiecore, Y2K and workwear, here are the 10 fashion trends that will help you step into 2023 with style.

Fashion is an eternal cycle. While some highlight the many—perhaps too many—trends that emerge from the catwalks, social networks, and the countless influencers who work their magic on our wardrobes, others eagerly await the inspirations that will influence our outfits from one week to the next —or almost. Either way, in 2023, it seems that we will have to choose between basics and excess, whether in terms of materials, colors, prints or proportions.

We've lost count of the number of times its return has been announced since the beginning of the pandemic, but it is clear that the suit will be an integral part of wardrobes in 2023. Many designers put suits back in the spotlight during the last round of fashion shows, albeit in more casual versions. Far from the fitted suits we know, it is oversized cuts that will be on the rise next year, as seen at Acne Studios, Stella McCartney or Dries Van Noten. But the most convincing trend remains the loose-fit blazer, worn with mismatched pants, or better yet, a simple pair of pantyhose.

While some will step out in suits, others will turn to functional, utility clothing, spanning elegance and comfort, and often characterized by a profusion of pockets. It's impossible to miss this trend, halfway between gorpcore and normcore, which shows that we won't be giving up on the casual styles adopted during the pandemic just yet. Miu Miu and Louis Vuitton are among the major houses that have explored this inspiration for the spring-summer 2023 season, in a sophisticated style for the former, and a more excessive style for the latter.

Already very much present in 2022, denim is going nowhere and will still be on the fashion agenda next year. However, while denim channeled the famous Y2K aesthetic last year—in particular heralding the return of the low-rise waist—it will this time be all about the '90s, with head-to-toe looks that are cool, loose and laid-back. Denim will be influenced by the utility trend, but not only, since we will also find long denim coats, and classic jackets with exaggerated proportions. This was spotted on the catwalks of Givenchy and Off-White, among others.

Also read: From Alessandro Michele at Gucci to Demna at Balenciaga, the hot trend is low-profile fashion designers

Yikes. We know it's not a comeback that's awaited by many, but leggings will be one of the must-have pieces of 2023. The good news is, however, that they will be landing in more daring versions. Farewell to the leggings that previously served as an alternative to sweatpants, as 2023 will turn leggings into a sophisticated fashion piece finished with transparency, sequins and eccentric prints. They're even set to adopt a flare cut that could prove highly popular. This trend was seen on the catwalks of Gucci and Knwls, and has already been adopted by many celebrities, like Kendall Jenner.

After the sneakers and chunky combat-style boots of 2022—and which won't be totally disappearing—it's time for a more minimalist and sophisticated shoe to move into the spotlight. In the same vein as the balletcore trend, which emerged last fall—and which already has 220 million followers (views) on TikTok—ballet flats will be coming to feet from the beginning of the year. Popularized by the fashion house Miu Miu, ballet flats will be worn with or without socks, and are already proving popular among a crowd of savvy influencers. Note that Mary Janes will also be popular, as will heels, which are expected to go higher.

Also read: The fashion trends of 2022 were largely shaped by social networks and TV shows

With normcore riding high, colors will be more discreet in 2023—with a few exceptions—making for a more minimalist wardrobe. Beige will be everywhere, as well as gray, white and black, which will be the staples of our wardrobe. The idea is to go back to basics, to embrace a less fleeting and more sustainable approach to fashion. Sacai, Fendi, Tod's and Coperni are among the houses that have made beige one of their favorite colors for the coming year. Note, however, that cobalt blue will also be bringing a flash of color to closets.

As if in response to this wave of neutral, almost dull colors, designers have given pride of place to prints of all kinds, with ultra colorful, playful and sometimes quirky throwback patterns and eccentric motifs, like at Moschino. Expect exotic fruits, flowers, leopard print, zebra print and snake print, not to mention geometric or abstract patterns, XXL logos, cartoons, and futuristic prints, spanning the real and the virtual. There will be something for absolutely every taste. This trend was spotted on the catwalks of Roberto Cavalli, Gucci, Dolce & Gabbana and Saint Laurent.

Time to shine! Still swimming against the tide of normcore and gorpcore—two strong trends of the year—some major fashion houses and renowned designers have made sparkle and shine the extravagant details of their new collections. It can be seen everywhere, in silver, gold, or colored versions, in head-to-toe looks or in small touches, lighting up our outfits and bringing a little shine to our lives. This festive atmosphere, sometimes laced with a disco theme, can only be welcome after the general doom and gloom of 2022. Glitter was legion on the catwalks of Valentino, 16Arlington and Tom Ford.

Turning up the heat in the new year, the world's four fashion capitals—New York, London, Milan and Paris—have made sheer, transparent items a must-have trend of 2023. After focusing on cut-outs and lacing, it's a less suggestive but equally sensual style that the top fashion designers are offering. Dresses, jumpsuits, pants and even tops will be tinged with sheer fabrics—conspicuous to varying degrees—as spotted at Prabal Gurung, Jason Wu, Monse, Miu Miu and Chanel. Note that this sheer trend will also be seen in menswear, with bold, daring pieces.

After several seasons dominated by mini and micro cuts—which won't disappear completely next season—it's time to make way for more length. Dresses and skirts will be a few dozen centimeters longer than last year, and will adopt a more minimalist aesthetic. Whether they're satin, sheer or oversized, they will be among the star pieces of the season, as seen at Givenchy, Acne Studios and Valentino.

Tweets by @forbesindia
Pizza Cutter: Meet the master storyteller from Domino's
From Facebook to YouTube, which social network ranked highest among Gen Z and Millennials in 2022?