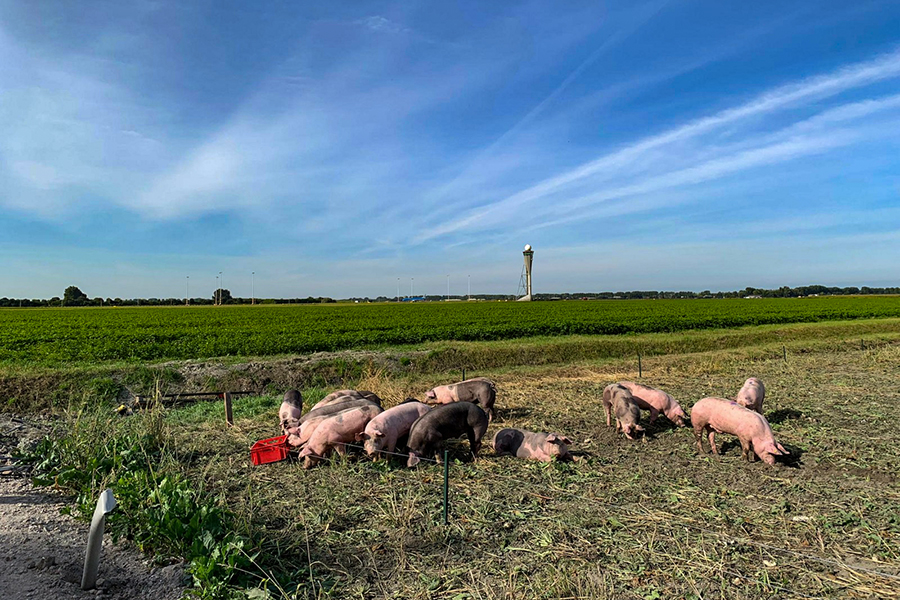 In the year from November 2018, 565 bird strikes were reported near Schiphol, Europe's third-largest airport
Image: Courtesy of Schiphol Group

To protect birds from collisions with aircraft—and vice versa—Amsterdam's airport has signed up a herd of pigs. Positioned between two runways in a sugar beet field, the animals were released to eat up the remnants of crops and keep birds at bay. And the experiment seems to be paying off.

When flying in or out of Amsterdam's Schiphol Airport, take a look out of the airplane window and you might see pigs strolling quietly between the runways. The Dutch capital's airport is surrounded by sugar beet fields, which, for years, have proved a magnet for birds, especially geese.

While bringing pigs to the airport might sound quirky, it's nonetheless a deadly serious matter. The birds, attracted by food, risk their lives by trying to land on these fields. Indeed, the risk of collisions with aircraft is high, and the birds can be sucked into aircraft engines.

As The Guardian reports, several incidents have occurred in recent years at Schiphol Airport, sometimes forcing pilots to make an emergency landing or turn back. In the year from November 2018, 565 bird strikes were reported near Schiphol, Europe's third-largest airport.

To keep air traffic flowing smoothly and protect the birds, the airport team launched a six-week pilot project, setting up 20 pigs on a two-hectare sugar beet crop plot. The animals come from Buitengewone Varkens, a small company that specializes in raising pigs in the open air.

The presence of these pigs serves a specific purpose: to consume crop leftovers and deter birds from venturing into the area. This is a much less drastic method than some of those previously used, such as using lasers or scare guns, or even shooting at the birds.

So far, the experiment seems to have been successful. The pigs are still present and have adapted to the environment, according to the project managers. Geese and other birds, meanwhile, have become rarer. And planes can take off and land safely.

Tweets by @forbesindia
Man's power over nature is the biggest illusion: Manoj Bajpayee
Shake the habit of spending too long sitting, your mental health will thank you