Is the reign of top models coming to an end? 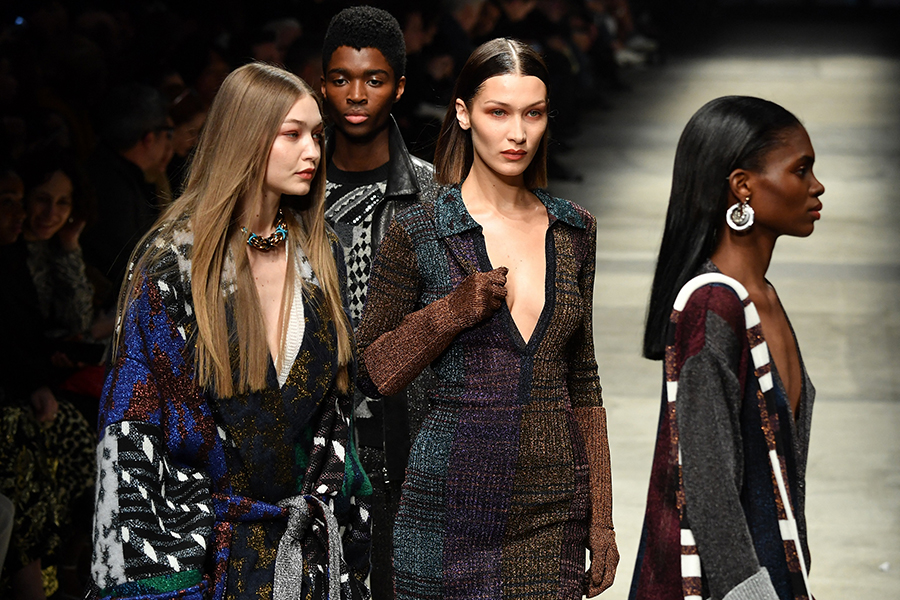 A ubiquitous presence on the catwalk before the pandemic, the Hadid sisters have recently had their place in the spotlight stolen by a new generation of models.
Image: Andreas Solaro/ AFP

Once ubiquitous on the catwalks and in the advertising campaigns of the biggest fashion houses, the recent crop of star models seem to have all but deserted the fashion sphere. Take the latest Balenciaga campaign, for example, which sees the most coveted models of the planet replaced by Isabelle Huppert, Justin Bieber or Kim Kardashian. So what's going on? Could it be a case for the fashion police?

They were everywhere! The Hadid sisters—Gigi and Bella—more or less reigned as queens of fashion until 2020, the year that brought the covid-19 pandemic. Darlings of the biggest fashion houses, the two daughters of the former model Yolanda Hadid were a ubiquitous presence on the catwalks, and even more so in the ads of major brands. The pandemic, through the cancellation of physical fashion shows, seems to have changed the game, even if that's not the only factor at play. More inclusive, and increasingly focused on all things digital, brands are now turning to voices, more than to bodies— although star models also have things to say—as much as to influencers committed to causes, with whom the public identifies, not to mention virtual models. All of which makes us wonder what's in store for the future of modeling, which is nevertheless inseparable from the fashion industry.

From supermodels to model influencers

Rewind back to the '90s and the rise of the supermodels. For the first time, a whole generation of models —such as Cindy Crawford, Claudia Schiffer, and Naomi Campbell, among others—experienced an extraordinary level of fame, becoming icons much more popular than the clothes themselves, and transforming the image of modeling forever. This was followed by a slew of star models, such as Kate Moss—a star of stars—whose personality transcended the norms imposed in the industry. That's a rare occurrence, however. Gradually, these supermodels have given way to another generation of models, who have climbed the career ladder while notching up followers on social networks.

Kendall Jenner, Bella and Gigi Hadid, Hailey Bieber, Emily Ratajkowski, and almost all the Victoria's Secret Angels, are part of this generation of model influencers, highly (perhaps almost too much) in demand among brands. The Hadid sisters particularly distinguished themselves between 2017 and 2019, rising to the top of the game as the most coveted models, sweeping up titles like model of the year, and as popular with the public as with the industry (one rarely going without the other).

As an example, between January and early March 2018, Gigi Hadid posed for Fendi, Tommy Hilfiger, Versace, Valentino, Stuart Weitzman and Reebok, and walked the runway for Jeremy Scott, Prabal Gurung, Bottega Veneta, Brandon Maxwell, Anna Sui, Alberta Ferretti, Moschino, Max Mara, Fendi, Tod's, Versace and Missoni. Meanwhile, over the same period in 2021, the young star only modeled for one and the same fashion house. Something that can be explained by her desire to make more selective choices, a luxury only afforded to the world's most popular models, as well as by a less frantic pace of Fashion Week events. But that's not all.

There are other factors that may shed light on the fact that Kendall Jenner, Hailey Bieber and the Hadid sisters are no longer—solely—the leading faces of fashion campaigns. As well as halting physical fashion shows—which have partially resumed since late 2020—the pandemic has also provided brands with the opportunity to accelerate their move to digital—something as good as enforced by the closure of stores around the world. But the fashion industry has not only opened and revamped e-stores, flanked by ultra-innovative services, it has gone even further in the exploration of digital realms, including inviting itself into the world of video games.

Dior, Balenciaga, Fendi, Gucci, Valentino and Burberry are some of the major brands that have embraced the gaming phenomenon, working with "League of Legends," "Fortnite" or "Animal Crossing: New Horizons." Some are even launching their own virtual universes, in order to present their new collections. And these are universes in which models have no place, with brands (inevitably) preferring the heroes of these fictional worlds. It's hard to imagine Kendall Jenner posing with Aatrox and Fiddlesticks—although it's definitely an interesting concept! As a result, the models of the real world have in some way had their place in the spotlight stolen by their virtual counterparts. And the phenomenon is expected to intensify as the entire industry rushes to the metaverse.

In addition to all of that, in the interest of inclusion -- a notion dear to the young generation—brands are also increasingly calling on ambassadors who are committed, authentic and representative of a form of diversity, whatever it may be. Once rare on the catwalk and in advertising campaigns, curvy or black models are, for example, now more in demand, as are female influencers who have millions of followers.

All these various factors mean that the representations of fashion are now much more inclusive, and much less dominated by a handful of icons. And that's no bad thing. It remains to be seen whether models, who have long ruled the catwalks, still have a bright future ahead of them.

Tweets by @forbesindia
Is remote working helping careers or hindering them?
Startup Fridays Season 2 Ep. 3: In entrepreneurship, as in life, breathe and know that this too shall pass — Anirudh Damani