Disclaimer: Akshay Kumar is not Munnabhai

The actor is seen donning a doctor's apron and flashing a stethoscope in a Policybazaar TV ad. What are the ethics of using medical figures in advertising, and how far does the disclaimer go? 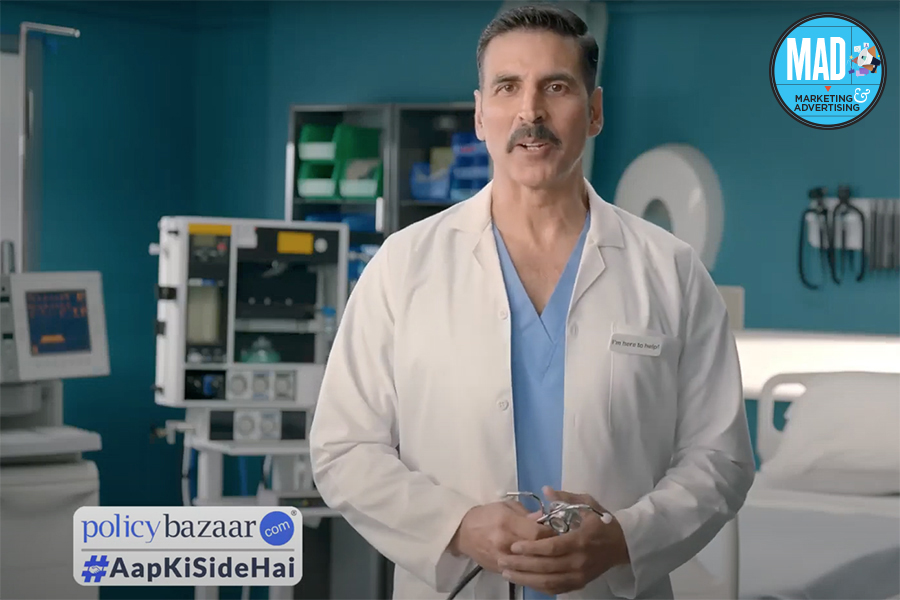 What’s the difference between reel and real? The naïve would say one missing letter: ‘a.’ Ask the same question to a common man, and you would get a comical reply: The former is fantasy, and the latter is, well, not so fantastic. The real answer, though, is with advertisers and marketers, who have mastered the art of reel life. It’s encapsulated in one simple word: Disclaimer. So, when actor Akshay Kumar is seen in a doctor’s apron, and holding a stethoscope for Policybazaar, an online insurance aggregator, what’s the big deal? He is an actor, and his job is to play roles. Didn’t he play Yamraaj for the same brand? If yes, did that make him God of Death? If no, then how is playing a doctor different? When Kumar can play a doctor in movies, why can’t he do the same in commercials? Let’s have the take of the brand. The commercial, claims a Policybazaar spokesperson in an email response, complies with all advertising guidelines, as well as the guidelines of the industry regulator. ASCI (Advertising Standard Council of India), the self-regulatory body, also doesn’t see anything objectionable. “There is no legal ban on actors playing doctors or other professions in advertising,” asserts an ASCI spokesperson. Where such a depiction misleads consumers into believing the benefits of the product, or certain claims made in the advertisement that cannot be substantiated by the advertiser, then ASCI may under its code deem such advertising to be misleading, and uphold complaints against such advertisements, the spokesperson added. This means there is no big deal. Right? Wrong. If the intent is not to use the convincing imagery of a doctor, then why make the celebrity pose like one? Advertising experts reckon that there is a thin line between legal and moral. At times, a brand can be strong on legal footing playing the ‘disclaimer’ game, but on a sticky wicket when it comes to the moral ground. So while playing a doctor is okay, when an actor posing as doctor talks about buying health insurance from a particular platform, it may not be ethical. It’s similar to brands—including fabric makers and soaps—claiming to kill 99.9 percent germs, including the coronavirus. Legally, they are okay because the claim is not 100 percent. But morally? Similarly, brands often show doctors with Indian names, but those who are not practising in India, endorsing products (seen frequently in toothpaste commercials or OTC advertisements) is legally okay. Brands are smart enough to know that doctors can’t endorse products, so showing those not practising in India helps them skirt the legal hurdle. But morally are they justified? Another instance of ‘moral versus legal’ is the classic way advertisers have been depicting mothers in commercials. Maa se behtar kaun jaanta hai (who knows it better than moms) is the positioning that most of the brands—shampoo, soap, health drinks—take. Legally, fine. Nobody can object. Morally? If moms know the best about the child, then what are dads doing? Only involved in procreation and spending money on the kids? Back to Policybazaar, advertisers reckon the brand is on a sticky moral wicket. “As a doctor, can you say that one would end up paying lakhs for treatment in a private hospital?” asks KV Sridhar, an advertising veteran, entrepreneur and global chief creative officer at Nihilent-Hypercollective. The reason behind posing a doctor looks simple: People are scared and doctors are best placed to make them less jittery. Advertisers today, Sridhar adds, straddle the fine line. “One kitanu (germ) would always be left by soap makers whenever they make 99.9 percent claim,” laughs Sridhar. The brands, he insists should stop taking consumers for a ride.  (Disclaimer: The author is a father, and claims that 99.9 percent of the time, he knows what’s best for his daughter)​