NFT artworks accounted for some $2.8 billion in sales last year and the rate has declined only slightly in the first half of this year, despite the rout in the crypto market 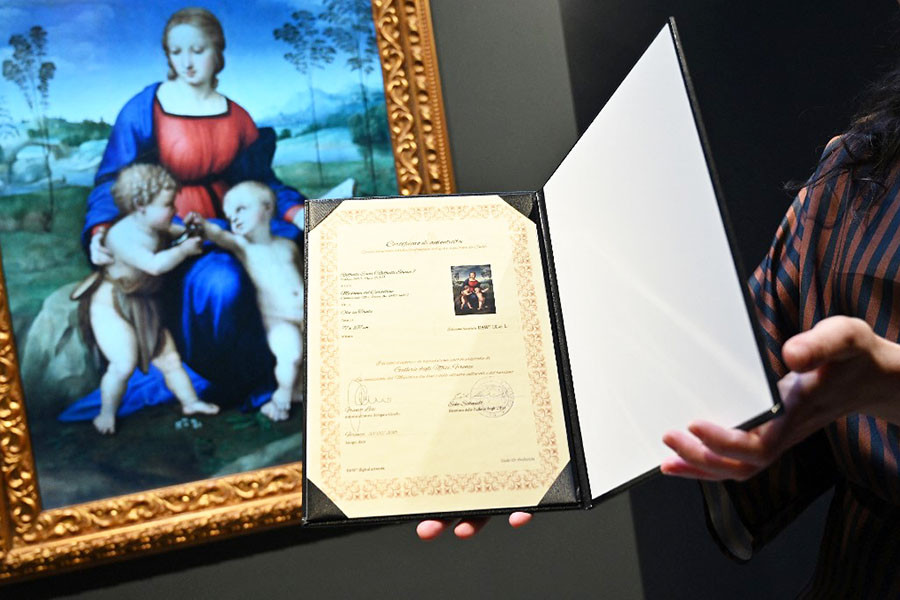 In this file photograph taken on February 15, 2022, a gallery assistant looks at a digital reproduction of the painting 'Madonna del Cardellino (Madonna of the Goldfinch' by Raphael, displayed as part of the 'Eternalising Art History: From Da Vinci to Modigliani' exhibition at the Unit London gallery in London, where so-called "NFT", (non-fungible token) digital reproductions of six Italian masterpieces, including paintings by Leonardo da Vinci and Amedeo Modigliani, are on display in London as part of the exhibition, entitled "Eternalising Art History". Image: JUSTIN TALLIS / AFP

Paris, France: The closest most people get to owning a world-famous artwork is to buy a cheap poster from a gallery, but art dealers are determined to harness technology to draw in new collectors.
Anaida Schneider, a former banker based in Switzerland, is among those promoting new ownership schemes—for a small fee, investors can buy a digital chunk of a painting and share in the profits when she sells.
"Not everyone has $1 million to invest," she told AFP. "So I came up with the idea to split, to make like a mutual fund but on the blockchain."
Each buyer gets an NFT, the unique digital tokens created and stored on the blockchain, the computer code that underpins cryptocurrencies.

Although cryptoassets have been routed this year with plunging values, collapsing projects and widening scandals, the NFT art sector has weathered the storm better than other parts of the crypto world.
NFT artworks accounted for some $2.8 billion in sales last year and the rate has declined only slightly in the first half of this year, according to analyst firm NonFungible.
Collectors and artists are among the most eager experimenters with the technology, even if it means owning only a slice of a digital copy of a painting.
A fifth of 300 collectors surveyed by the website Art+Tech Report said they had already engaged in so-called fractional ownership.
Schneider's Liechtenstein-based company Artessere offers squares of paintings by Soviet artists including Oleg Tselkov and Shimon Okshteyn for 100 or 200 euros ($100 or $200) a piece.
She is giving herself 10 years to resell them.
Schneider owns the paintings she sells, thus avoiding legal complications, but attempts to offer novel digital ownership schemes for publicly owned works is proving more tricky.

Thirteen Italian museums recently signed deals with Cinello, a firm that sells limited edition digital reproductions, to offer ownership of digital replicas of masterworks.
The buyer gets a unique, high-resolution digital copy to project onto a screen and a certificate from the museum, which gets half the proceeds.
The company held a splashy London show in February displaying digitised works by Renaissance masters including Raphael, Leonardo and Caravaggio. It has since sold a handful of them.
Also read: NFT market sees first insider trading case in US
But the Italian culture ministry was reportedly irked that a replica of Michelangelo's "Doni Tondo" sold for around 240,000 euros but Florence's Uffizi gallery got less than a third of the proceeds.
A spokesman for the ministry was quoted in several outlets last month as saying the issue was "complex and unregulated" and asked museums not to sign any new contracts around NFTs.
Cinello boss Francesco Losi was not pleased with the characterisation, telling AFP: "We don't sell NFTs."
Buyers can ask for an NFT to go with their image, but the firm said they had their own patented system to secure ownership, which they call DAW.

Cinello said it had digitised more than 200 works and its sales had generated 296,000 euros in extra revenue for Italian museums.
But the firm's difficulties in Italy underline the mixed blessing of NFTs—they bring publicity but also suspicion.
The NFT sector—which covers anything from avatars in computer games to million-dollar cartoon apes—is replete with scams, counterfeit works, thefts and wash trading.
Losi said he was well aware that NFTs could be used "in the wrong way" and was unsure what future they had in the art world.
Also read: Can NFTs help reclaim Africa's looted cultural heritage?
Anaida Schneider stressed that her project was protected by law in Liechtenstein, the tiny principality being among the first jurisdictions to pass a law regulating blockchain companies in 2019.
Beyond that, she said her insurance would cover damage to the artworks and she had also factored in the possibility that the paintings would fall in value, though she declined to give exact details.
"I hope it never happens," she said. "For me, it's very important to put this idea in the market."
By Jordi ZAMORA
© Agence France-Presse