More than 40,000 lawsuits, many from women with ovarian cancer or mesothelioma, have accused Johnson & Johnson of selling talc baby powder while being aware of its links to health risks, such as possible asbestos contamination 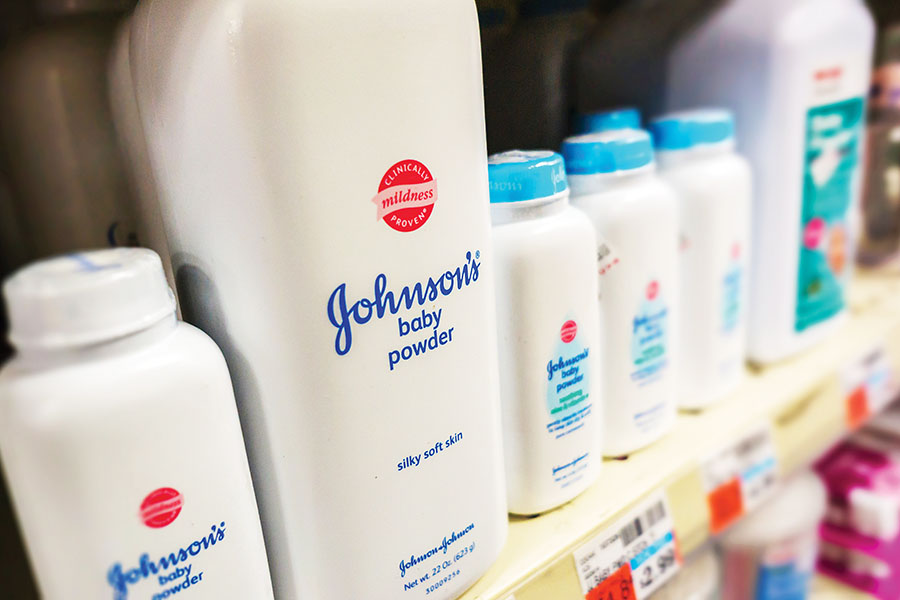 Talc-based products account for a tiny sliver of Johnson & Johnson’s sales of consumer products, which also include Band-Aid bandages and Listerine mouthwash, but are responsible for an enormous portion of its legal headaches Image: Shutterstock

Johnson & Johnson will start using cornstarch in all the baby powder it sells around the world, shifting away from the talcum powder that put the popular product at the center of tens of thousands of lawsuits filed by customers.

The company discontinued North American sales of its talc-based baby powder in 2020 after recalling some bottles in 2019 but will stop sales of the product globally in 2023, it said Thursday. Johnson & Johnson said it was already selling baby powder using cornstarch in countries around the world.

More than 40,000 lawsuits, many from women with ovarian cancer or mesothelioma, have accused Johnson & Johnson of selling talc baby powder while being aware of its links to health risks, such as possible asbestos contamination.

The company said the decision to move to cornstarch was part of a continuous evaluation of its portfolio and would help simplify its product offerings and meet “evolving global trends.” It also reiterated its position on baby powder’s safety: “We stand firmly behind the decades of independent scientific analysis by medical experts around the world that confirms talc-based Johnson’s Baby Powder is safe, does not contain asbestos and does not cause cancer.”

Johnson & Johnson has sold cornstarch baby powder for decades, developing the version of the product in 1980 after consumer advocates raised concerns that talc contained traces of asbestos, a carcinogen. The company did not immediately respond to questions about how much talc baby powder remained on the market.

“It’s kind of the no-brainer solution,” said Alex Scranton, director of science and research at the environmental advocacy group Women’s Voices for the Earth. She noted that cornstarch was inexpensive, easy to obtain, and free from talc’s “toxic profile” and concerns about asbestos contamination.

Women’s Voices for the Earth was one of nearly 200 organizations that participated in a campaign, led by Black Women for Wellness, to pressure Johnson & Johnson to strip talc-based products from shelves worldwide.

Janette Robinson Flint, executive director of Black Women for Wellness, said she was celebrating the news.

In April, Johnson & Johnson’s shareholders voted against a proposal to stop sales of the talc baby powder in global markets such as Asia and South America — a request that had been fueled by concern about the company’s legal and reputational woes. Last year, the company faced $1.6 billion in talc-related litigation expenses and had set aside $3.9 billion the previous year. Reputation tracking firms said Johnson & Johnson’s once-pristine name had been tarnished among consumers by the accusations around talc.

Talc-based products account for a tiny sliver of Johnson & Johnson’s sales of consumer products, which also include Band-Aid bandages and Listerine mouthwash, but are responsible for an enormous portion of its legal headaches. In one talc case, Johnson & Johnson was ordered to pay $4.69 billion to 22 plaintiffs in one of the largest personal-injury verdicts ever.

The company has tried to limit its legal exposure via an elaborate corporate pirouette known as the Texas Two-Step. In February, a bankruptcy judge in New Jersey cleared the company to move ahead with the maneuver, which gets its name from a foxtrot-inspired dance style and derives its convoluted structure from a quirk of Texas business law.

The reorganization process, which involves partitioning off assets and sealing them away from creditors, has been tried only a handful of times since being conceived in 1989, mostly by companies facing asbestos exposure claims. If successful, it could shield Johnson & Johnson from billions of dollars in legal claims while also demonstrating an escape route for other companies swamped with personal injury litigation.

The gambit has put the Johnson & Johnson talc lawsuits in stasis and could leave claimants, some of whom are extremely ill, with a smaller pot of funds for payouts. Plaintiffs’ lawyers have filed an appeal to try to stop the maneuver and said the next hearing is scheduled for September.

“After decades of selling talc-based products the company knew could cause deadly cancers to unsuspecting women and men, J&J has finally done the right thing,” said Leigh O’Dell, one of the plaintiffs’ lawyers.

Tweets by @forbesindia
Building an 'ARMY' of fans: Marketing lessons from K-Pop sensation BTS
India at 75: Why minorities are sleepless and feeling insecure