US labour officials propose redefining when gig workers are employees

The move by President Joe Biden's Labor Department would lower a bar set by his predecessor regarding when someone is considered an employee instead of a contract worker. It also comes as "gig economy" companies from rideshare platforms to food delivery services strive to maintain the status quo 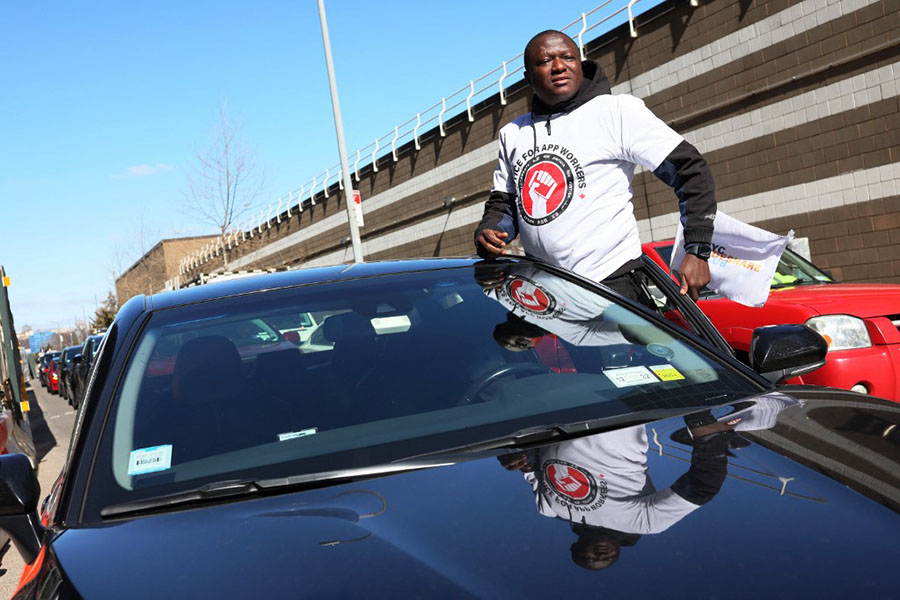 Mohammed Dukuly, a Lyft driver, hangs out of his car as he joins other app-based drivers and delivery workers take part in a protest at the former headquarters of Uber Technologies on March 29, 2022 in New York City, demanding fair pay in response to rising gas prices. Image: Michael M. Santiago/Getty Images/AFP

United States labor officials proposed a rule change Tuesday that could make it easier for gig workers such as Uber drivers to be reclassified as employees entitled to benefits.
The move by President Joe Biden's Labor Department would lower a bar set by his predecessor regarding when someone is considered an employee instead of a contract worker.
It also comes as "gig economy" companies from rideshare platforms to food delivery services strive to maintain the status quo.

The new formula includes factors such as how long a person works for a company and the degree of control over the worker, as well as whether what they do is "integral" to a business, according to the proposed rule.
"We believe the proposed regulation would better protect workers from misclassification while at the same time providing a consistent approach for those businesses that engage or wish to engage with independent contractors," Jessica Looman of the US Department of Labor said at a press briefing.
Being classified as employees would entitle workers to sick leave, overtime, medical coverage and other benefits, driving up costs for companies such as Uber, Lyft and DoorDash that rely on gig workers.
The proposed rule change is subject to a 45-day public comment period, meaning there is no immediate impact, but share prices took a hit on the news.
Also read: How gig workforce can help build India's next most valuable startups
Uber and Lyft shares ended the formal day down more than 10 percent, while DoorDash was down nearly six percent.
"It's a clear blow to the gig economy and a near-term concern for the likes of Uber and Lyft," despite uncertainty about how the new rule might be interpreted across the country, Wedbush analyst Dan Ives said in a note to investors.
"With ride sharing and other gig economy players depending on the contractor business model, a classification to employees would essentially throw the business model upside down and cause some major structural changes if this holds."
Uber and Lyft have consistently argued that their drivers want independence, provided benefits are added to the mix.
Also read: Gig economy: The rise of the new collar among India's working class
In California, the cradle of the gig economy, voters in late 2020 approved a referendum backed by firms such as Uber that preserved keeping drivers classified as independent contractors.
The measure effectively overturned a state law that would require the ride-hailing firms and others to reclassify their drivers and provide employee benefits.
The vote came after a contentious campaign with labor groups claiming the initiative would erode worker rights and benefits, and with backers arguing for a new, flexible economic model.
© Agence France-Presse​

Tweets by @forbesindia
UN urges 'complete transformation' of global energy system to fight climate change
Photo of the day: 12 years in the making