What price is right? Why capping Russian oil is complicated

Setting the price will require aligning the complex array of economic and diplomatic forces that govern volatile oil markets. 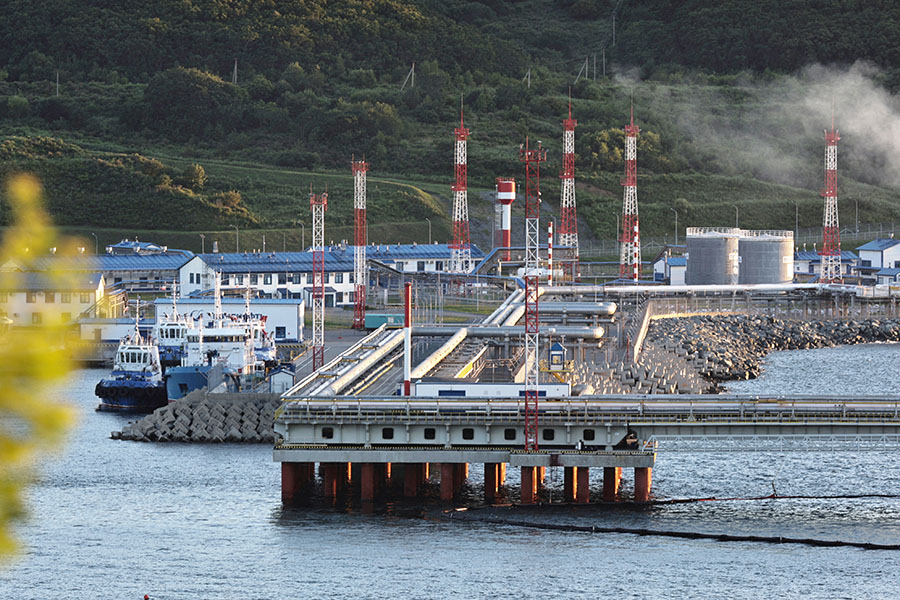 A view shows the crude oil terminal Kozmino on the shore of Nakhodka Bay near the port city of Nakhodka, Russia August 12, 2022. Image: REUTERS/Tatiana Meel

WASHINGTON — As the United States and its Western counterparts race to finalize the mechanics of an oil price cap intended to starve Russia of revenue and stabilize global energy markets, a crucial question remains unresolved: How should the price be set?

The Group of 7 countries that formally backed the price cap concept this month are deliberating how much Russia should be allowed to charge for its oil as they prepare to release more details of the plan. It has emerged as a central question that could determine the success of the novel idea, Russia’s response and the trajectory of oil prices as winter approaches. Setting the price will require aligning the complex array of economic and diplomatic forces that govern volatile oil markets.

The consequences of getting the oil price cap wrong could be severe for the world economy, and time is running short. The Biden administration fears that if the cap is not in place by early December, oil prices around the world could skyrocket given Russia’s outsize role as an energy producer. That’s because when a European Union oil embargo and a ban on financial insurance services for Russian oil transactions take effect Dec. 5, the removal of millions of barrels of Russian oil from the market could send prices soaring.

European financing and insurance dominate the global oil market, so the looming sanctions could disrupt exports to parts of the world that do not have their own embargoes — by making it harder or more expensive to get Russian oil at a time when energy costs are already high. The price cap will essentially be an exception to Western sanctions, allowing Russian oil to be sold and shipped as long as it remains below a certain price.

The idea has won plaudits from economists who see it as an elegant win-win strategy for the West. But many energy analysts and traders have expressed deep skepticism about the concept. They believe that a fear of sanctions could scare financial services companies off Russian oil, and that Russia and its trading partners will circumvent the cap through new forms of insurance or illicit transactions.

The impact of the proposed oil price cap and the potential for unintended consequences are two of the biggest quandaries facing the nations that have been enduring soaring inflation prompted by supply chain disruptions and Russia’s war in Ukraine.

“We are looking at a far more complex oil market,” said Paul Sheldon, a geopolitical risk analyst at S&P Global Platts Analytics. “This is an unprecedented dynamic where you have such a large supplier of oil under unprecedented sanctions. We’re in new territory on several levels.”

Exactly how the price cap will be set remains unclear.

In a joint statement this month, finance ministers from the G-7 said the “initial” price cap would be based on a range of “technical inputs” and decided on by the group of countries that join the agreement. The Treasury Department’s Office of Foreign Assets Control said last week that the price cap would be determined by a “range of factors” and that countries that were part of the price cap coalition would make the decision by consensus. The coalition would be headed by a rotating coordinator from among the countries.

A Treasury official said the process for setting the level of the oil price cap would constitute the next phase of the agreement, after technical details about enforcement had been decided and more countries had signed on to the coalition.Also read: How net zero goals, Russian war are sparking Europe's hydrogen economy

As U.S. officials think about setting the price cap, they are focused on two numbers: Russia’s cost of producing oil and the price that the commodity historically fetched on global markets before the war in Ukraine sent prices higher.The Biden administration realizes that Russia will not have an incentive to keep producing oil if a cap is set so low that Russia cannot sell it for more than it costs to pump it. However, setting the cap too high will allow Russia to benefit from the upheaval it has caused and blunt the cap’s ability to sufficiently curtail Russia’s oil export revenues.

Before the war and the pandemic, Russian crude, known as Urals, typically sold for between $55 and $65 a barrel. Determining Russia’s cost of production is more complicated because some of its wells are more expensive to operate than others. Most estimates are around $40 per barrel.

The price cap could settle somewhere among those numbers.Also read: EU plan to cut gas use by 15% comes into effect
Officials are also discussing whether shipping costs should be included in the cap or if it should just include the oil itself. Separate caps would be enacted for Russia’s refined oil products, such as gas oil and fuel oil, that are used for operating machinery and heating homes.

Oil prices have hovered around $90 a barrel in recent weeks. Russian oil is currently selling at a discount of about 30%. Some analysts believe that designing the cap as a mandated level below global benchmark prices could be more effective since oil prices can swing sharply.

“If you fix it at a certain level, that could create some risks because the market can fluctuate,” said Ben Cahill, a senior fellow in the Energy Security and Climate Change Program at the Center for Strategic and International Studies, who noted that oil prices could fall below the cap level if it was set too high.

“To increase the economic pain on Russia, you want to make the capped price substantially lower than the global average,” he said.Also read: Gas crunch pushes German glassmaker to the brink

As of now, the Treasury Department does not appear to support such an idea. The United States intends for the cap to be a fixed price — one that would be regularly reviewed and could be changed if the countries in the pact agreed to do so. The frequency of the reviews would depend on market volatility. Setting the cap at a discounted rate would introduce additional complexity and compliance burdens, the Treasury official said, because the cap rate could change hourly.

Making sure the price cap is adhered to is another hurdle. Treasury Department officials have been holding discussions with banks and maritime insurers to develop a system in which buyers of Russian oil products would “attest” to the price that they had paid, releasing providers of financial services of the responsibility for violations of the cap.

In its guidance last week, the Treasury Department said service providers for seaborne Russian oil would not face sanctions as long as they obtained documentation certifying that the cap was being honored. However, it did warn that buyers who knowingly made oil purchases above the price cap using insurance that was subject to the ban “may be a target for a sanctions enforcement action.”

It is not clear how many countries beyond the G-7 will join the agreement. The Biden administration is hopeful that even if countries such as China and India do not formally participate they will use it as leverage to negotiate lower prices with Russia.

Besides the oil cap’s price, the other big wild card is Russia’s response to it. Russian officials have said they will not sell oil to countries that are part of the price cap coalition, and analysts expect that the country will do its best to fan the volatility with some form of retaliation.

The United States hopes that economic logic will prevail and that oil will keep flowing, albeit at a cheaper price.

“Russia may bluster and say they won’t sell below the capped price, but the economics of holding back oil just don’t make sense,” Wally Adeyemo, the deputy Treasury secretary, said at a Brookings Institution event last week. “The price cap creates a clear economic incentive to sell under the cap.”

Edward Fishman, a senior research scholar at the Center on Global Energy Policy at Columbia University, argued that the price cap could work because the incentives that it would create aligned most buyers, sellers and facilitators of oil transactions toward compliance. He suggested that global oil prices could end up organically gravitating toward the level of the price cap.

However, Fishman acknowledged that Russia and its president, Vladimir Putin, might read the incentives differently.

“There’s always a sliver of a doubt in people’s minds about Putin’s rationality and his willingness to set the global economy, and his own economy, ablaze in order to make a point,” Fishman said.