Delhi Is Hiding Its Beggars Ahead Of Commonwealth Games

Delhi wants to dazzle during the Commonwealth Games in 2010. It doesn’t want its beggars to show up before the sporting heroes and tourists. But where is it hiding them?

Like any place in India that attracts visitors, Delhi’s India Gate has its fair share of beggars. But every January, for one week around the Republic Day on January 26, the streets around the war memorial are miraculously cleared. No grubby hands tugging at your sleeves or touching your feet for alms, no urchins peering into cars, tapping on the rolled up windows.
You’ve got the Delhi government to thank for that. However, this time the mighty hand is sweeping the whole city as it prepares to welcome visitors from all over the world for the 2010 Commonwealth Games.

Using an anti-beggary law, Delhi recently launched a drive to ensure that the city is free of beggars for the Commonwealth Games in 2010. 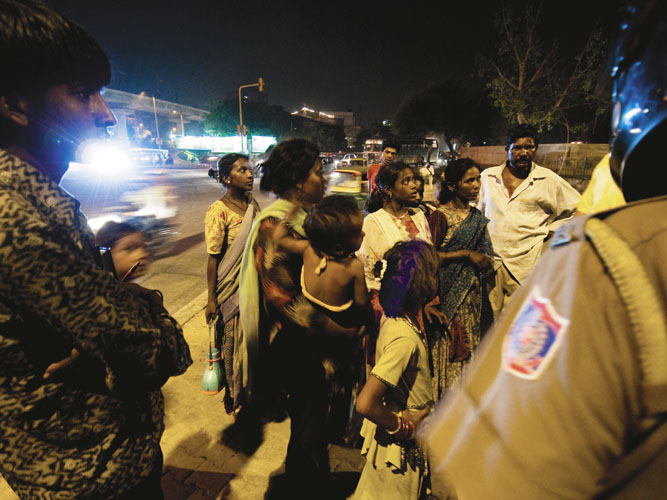 Image: Amit Verma
UP IN ALMS: Beggars are being removed to make Delhi look appropriate for the Games
Delhi is certainly not alone in attempting such a move. China tried it in the run up to the 2008 Olympics. Several states in the US and Canada similarly outlaw panhandling. Some cities like Greensboro in North Carolina control this by requiring panhandlers to get a licence. The beauty treatment, however, has many detractors. Not least among them are the pavement dwellers, often the targets of police raids.
The Law Says So
Beggary was first made a crime in Mumbai in 1959 through the Bombay Prevention of Begging Act, a law that has subsequently been adopted by 18 more states, including Delhi.
To ensure the law is enforced, Delhi’s social welfare minister Mangat Ram Singhal has announced the setting up of a dozen mobile courts for trying beggars. Singhal told Forbes India that the mobile courts, of which two are operational, had so far tried 55 persons.
There is a procedure for segregating beggars from employed people living on the street. “We prepare a social investigation report for every person who is arrested under the beggary act. We ask the arrested person how he came to beg with a view to ascertaining whether he had no other means of earning a livelihood. In my experience a majority of the beggars are professionals who could have earned a decent living otherwise,” says an officer who works with the special court.
If found “guilty”, the person is sent to one of 12 shelters in Delhi. The Delhi government even plans to create a database of beggars and set up biometric systems in the shelters to identify repeat offenders.
An official with the social welfare department claims that 95 percent of people found begging in Delhi are “outsiders”. He says the state plans to approach the Centre to see whether the beggars in Delhi could be sent back to their homes in states like Bihar, Rajasthan and Uttar Pradesh.
The Key Obstacles
Though the Delhi government’s plan is elaborate, it won’t be an easy task.

1. Questioning right and wrong: While the government ruthlessly wields the Beggary Act, the sanctity of the law itself is in question in the High Court. Former IAS officer turned social worker, Harsh Mander, has filed a Public Interest Litigation in the Delhi High Court listing several cases of police arresting elderly and sick people, who have no means to sustain themselves, on charges of begging.
Paramjeet Kaur, an activist with Ashray Adhikar Abhiyan, an NGO that works for destitute people, says that Delhi is violating human rights as well as the Indian constitution. “The government is terrorising the poor to leave the city. Most of the people who live on the streets depend on seasonal jobs for a living. How can you arrest employed people under charges of beggary? They do hold a job,” she says.
A study conducted in 2006 by lawyers providing legal aid to people arrested for beggary in Delhi says that a majority of the people arrested were predominantly working as labourers and hawkers.
Mander says that as per the anti-Begging Act police officers are authorised to arrest without a warrant and that it was this draconian power that was used routinely by them to reduce all homeless people to a continuous state of fear.

The rationale for anti-begging laws stems from a view that there are organised begging mafias, that aggressive panhandling is a public nuisance that causes economic loss to businesses as it turns away potential customers, and that able-bodied people should work.
Although there have been sporadic reports about the begging mafia operating in Delhi, activists who work with the homeless say that such cases are an exception rather than the rule. “The Delhi Police’s Crime Branch have themselves presented a report which says that there is no organised begging mafia that operates here,” says Mander.

Nevertheless, there is a debate on the ethics of punishing people for their suffering arising out of abject poverty. Some researchers and law enforcement professionals in the US and Canada argue that anti-begging laws violate the right to freedom of expression — that for destitute people, begging is often the only way to voice their need for assistance.
2. Where will the convicted go? Delhi faces a practical problem in implementing its plan — there just isn’t enough room to accommodate the beggars in the shelters. 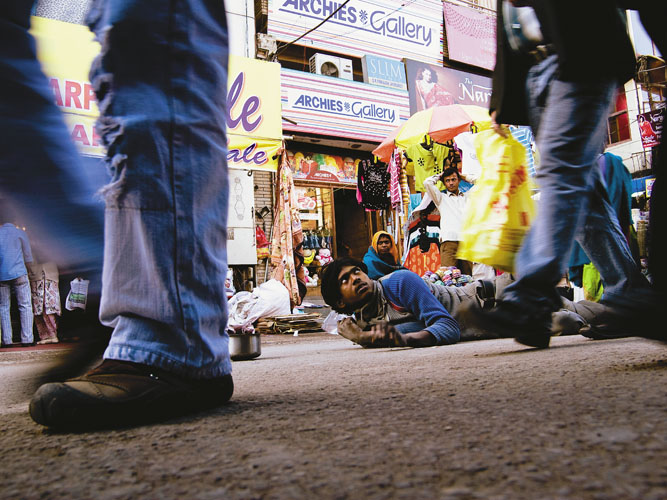 Image: Amit Verma
DOWN AND OUT: Distress in villages pushes many to migrate to Delhi and some become beggars
Delhi is estimated to have more than one lakh homeless people living on its streets — there is no data on how many of these are beggars. Those sentenced by the mobile courts are sent to one of the 12 beggar homes. Together, they can accommodate only about 2,000 people.
Then there is the question of migrants. Experts say that the migration of people from villages to cities including Delhi would go up due to the agricultural distress that had affected most of rural India.
“The level of distress in the rural areas is very high especially after the Centre declared many parts of India to be drought-hit. So Delhi can expect more people from the villages to come here looking for a job,” says Himanshu, a professor with the Jawaharlal Nehru University who uses a single name.
A home near the Old Delhi railway station that provides free shelter to new migrants to the city is a good indicator of the extent of distress migration into the city. The shelter, which can host around 300 people, has around 450 people living there. In winter, that number goes up to 700, say staffers at the shelter.
Is There a Solution?
There is, but unfortunately for Delhi, it’s not a simple one. It involves enforcing the law together with addressing the core issues that give rise to begging in the first place. A 2006 US Department of Justice paper says “ Panhandling, like many other forms of street disorder, is controlled more through informal means than through formal enforcement. Panhandlers, merchants, passersby, social workers, and police beat officers form an intricate social network of mutual support and regulation.”
Meanwhile, as Delhi races to build brand new flyovers, stadia and a metro rail network in time for the Games, the government is unsparing in its efforts and money. But perhaps the homeless also are waiting for the flyovers. Then there will be more space to sleep under.