When the crisis hit, Future Group CEO Kishore Biyani hunkered down and trimmed costs. He learned to unlearn many of his own rules of retailing. Now, as shoppers are back with a vengeance, he is in far better shape to tap that growth 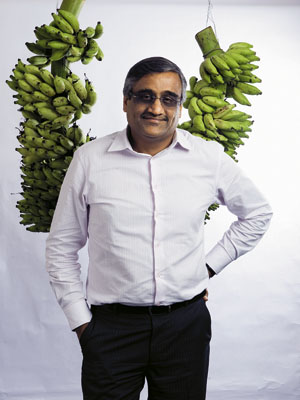 My Mentors: Sam Walton and Dhirubhai Ambani. I have followed them since my late teens. I have never met them, but I would read about them, their books and follow them pretty closely
How they have helped me hone my leadership skills: There was a lot to learn from them on how to dream big, how to build a business and how to create an organisation that is able to scale up
Their advice that has stayed with me: Two of my favourite quotes from Sam Walton are, “Capital isn’t scarce; vision is.” And “There is only one boss, the customer. And he can fire everybody in the company from the chairman down, simply by spending his money somewhere else.”

It was the middle of September 2008. Kishore Biyani was watching television images of employees from Lehman Brothers carrying their belongings out in cardboard boxes. He knew there would be blood.

Biyani, at that time, was in the middle of a massive expansion spree, which was guzzling capital. Then the taps ran dry. His sales plunged. Bankers who until then had queued up at his offices to lend started to call in their loans, and funds that had invested in his companies decided to get out. His market capitalisation plunged two-thirds in a matter of six months. Biyani who had invested way ahead of the cash flows from his network, found himself trapped.

To his credit, Biyani did the next best thing: He hunkered down for the next 18 months, mobilised his troops to slash costs, slimmed down his portfolio and now, as shoppers are back with a vengeance, the Future Group is in far better shape to tap that growth.

It started with Biyani questioning many of his own assumptions on conducting business. In his rush to open new formats — from spas to book shops and sportswear to discount apparel stores — and drive up the group’s valuations, he would entirely rely on his gut. Sometimes, the bets worked, but in a lot of cases, they veered off course. “That time was different. Now, we perfect something and then roll it out,” he says. He’s now more willing to listen to others. Two years ago, with his back to the wall, he hired McKinsey for advice on how to get his business back in shape. He has also hired a slew of professionals from multinational firms like Pepsico and Unilever and handed over the reins of operations to them.

This is a striking change for an entrepreneur who always scoffed at consultants and professionals alike (‘I do all the thinking around here’ he once famously remarked) and had little patience for long-winded presentations on market potential. Family members are now part of a Family Business Board, while professionals run the day-to-day operations.

The old ambitions are once again coming to the fore. Biyani is talking about his vision of taking the Future Group to a $20 billion enterprise by 2020 — backed by a plan to also get him there. He has cleaned up his operations and put in technology to make the back end more efficient and transparent.
Food — including fresh fruits and vegetables — will be a big focus area, something that Biyani had knowingly ignored in the past because of wafer-thin margins. After many months of carefully planned home visits, he and his foods team learned one home truth: Unlike Western markets, food habits of Indian consumers were far from homogenous. They were based largely on the ethnicity of the consumer. This made it harder for the retailer to predict the ideal assortment of food items to stock in the store.

Biyani’s team discovered that food habits rarely changed no matter which part of the country a family was living in. Today, ethnic foods, launched under the Ekta brand, are already a big draw at his stores. And gobindobhog rice outsells local varieties at some stores.

Also, as part of the restructuring, the Future Group will focus on four key businesses: Food and grocery, home, apparel and electronics.

Yet, the original success story, Big Bazaar, the crowded hypermarket model that got Biyani into the big league — and even today accounts for about three-fourth of the group’s revenues, is being primed for a gradual overhaul. Biyani’s daughter Ashni is leading a strategic project to understand what consumers at Big Bazaar will want five years from now. Food Bazaar Gourmet, a recent addition, offers customers specialty food along with better designed store shelves and brighter lighting.

Biyani is thinking big once more. This time, the plans look a shade more realistic.

Tweets by @forbesindia
7 Corporate Moves to Watch Out For
Hemendra Kothari: Beyond Profits