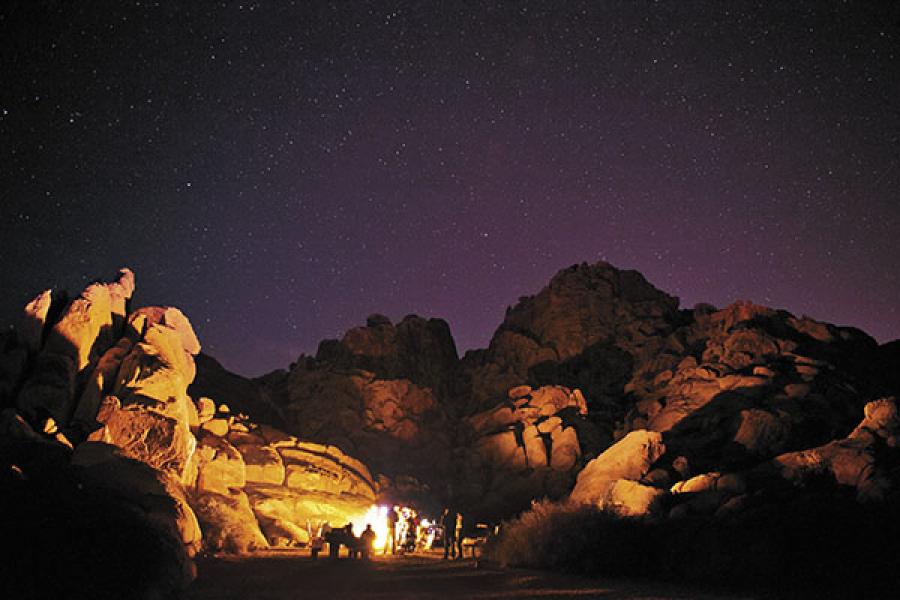 Image: Corbis
The campsite at the Joshua Tree National Park in the US

As my freezing breath crystallises in the cold December air, I pause from my task of collecting more firewood from the trunk of the rental car and look around. I see a bleak desert landscape. Rocks in grotesque forms lit by uneven starlight on a moonless night. In the distance, I notice the strange alien shapes of the Joshua trees.

But despite this moment of quiet contemplation, I’m aware that I’m not alone in the wild and weird Joshua Tree National Park, California. It is New Year’s Eve 2014, and many native Californians have had the same idea as me: Of conducting their year-end celebrations in the Mojave Desert, under the wheeling stars. I can see warm puddles of flickering light from campfires dotting the designated camping area called Jumbo Rocks.

Off in the darkness, someone is playing the bongos. And I think back to a few hours ago, when I was just entering the park.

The sun had set in a blaze of vermillion while I was driving through Route 62, the highway leading to the entrance. By the time I paid the $21 toll to enter the park, night had fallen. In the darkness, the light from the headlamps of my car picked out the yellow lines on the road and, a moment later, there was a strange white glow on either side. Everything else outside my windscreen was black: The tar on the road and the dark of the night merged into a single opaque mass. Tired from driving for the past five hours, it took me a moment to realise what the white glow was. The temperature had finally sunk into the minus-five degree range, cold enough for snow to collect on my path. In my fatigued state, I could easily have skidded off the road.

I was more mortified than scared at the prospect of an accident. My girlfriend was sitting next to me, and the last thing you want to do in front of someone you love is wreck a car because you weren’t paying attention. I forced myself to stay alert.

Despite the 200-odd sites up for grabs, the Jumbo Rocks campground in the park is full and we share our space with another group of visiting campers from nearby Pasadena. They are a bunch of 20-somethings celebrating a 10-year high school reunion and, in exchange for our space, they invite us to their fire to share a meal and some Fireball Cinnamon Whisky. 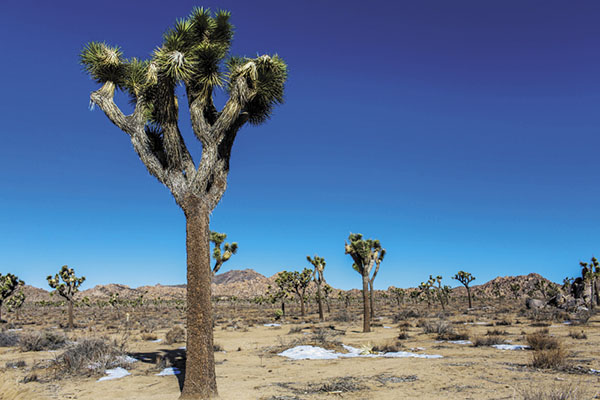 Joshua Tree National Park is named after the Joshua tree, a kind of yucca plant that’s only found in a few places in the Mojave Desert and the San Bernardino Mountains. It is an alien looking plant; its spiky leaves point upwards to the sky, jutting out from a hard spiny trunk. It’s that upward pointing posture that apparently caused it to be named the Joshua tree. Legend has it that Mormon settlers, having made their way across the Colorado River, encountered these strange trees. It reminded them of the prophet Joshua, limbs outstretched in supplication, pointing the way westwards towards fertile lands and plentiful harvests. 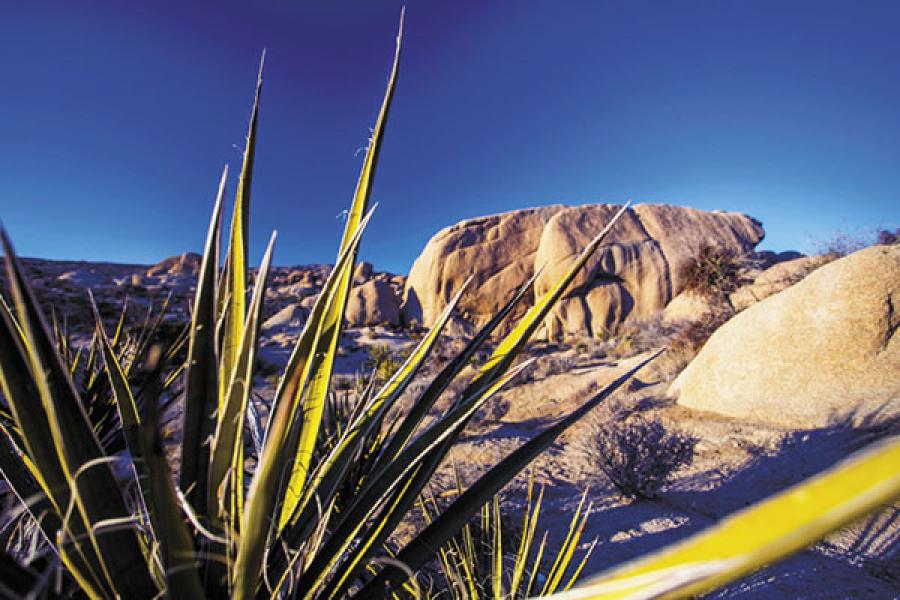 Image: Vahishta Mistry
The Joshua tree gets its name from its spiky leaves pointing upwards, resembling the outstretched limbs of prophet Joshua

Joshua Tree National Park is also high in public consciousness because it has a pop cultural reputation of being a destination that enhances the impact of recreational and psychedelic drug use. Although there wasn’t any such activity in evidence that night, there are several accounts of rockstars and celebrities who have visited the park (especially in the ’60s and ’70s) to commune with nature and gain inspiration through pharmacology. The list spans legends such Jim Morrison, Keith Richards, The Eagles, Eric Burdon (of Brit band The Animals, whose biggest hit was House of the Rising Sun) and Josh Homme, lead singer of Queens of the Stone Age.

There is even an apocryphal tale of John Lennon having come to Joshua Tree National Park, and having been inspired to create an LP called the Joshua Tree Tapes.

The LP exists, but any confirmation on whether the Beatles singer ever visited the park is lost to history.

Although it is a dark, moonless night, the light from the stars is almost shockingly bright. And since it’s a dry, arid desert at an average elevation of 3,000 feet, Joshua Tree National Park offers some of the best stargazing in the Southern California area. All that starlight is illuminating the trees, morphing them into ghostly figures on the edge of my vision. The soft wind blowing through the leaves and giving movement to the trees only adds to the creepy feeling that there are spirits of the night watching over our little campground.

The other, larger companions I am surrounded by are huge granite rocks. Formed from cooling magma over hundred million years ago, the effects of wind and water have eroded them into megalithic shapes. Although completely natural, they look as though giants have placed them in their current positions. The rock formations are rounded and appear smooth from afar, lending themselves further to the illusion that they have been rolled into place by hands much larger than ours.

In the day, these rocks, some as high as about 60 ft, allow for incredible climbing and the routes to reach the biggest and most impressive formations are scrambled over by the intrepid hiker. The red and ochre of the rocks stand out against the beige sandy ground and the green and brown of the Joshua trees dotting the landscape. By night, though, amorphous shapes are all that are visible. In the starlight, they are all a uniform grey: Think of a herd of elephants that has decided to bunk down for the night around the campsite.

The greyness and cold is tempered by the warm smiles as I throw down the pile of firewood and retake my seat in a comfortable camping chair, courtesy our guests from Pasadena. The roaring fire keeps the chill from our bones, while a guitar gets plaintively plucked nearby. The bongos are still at it in the distance. There’s laughter all around and the smell of the barbecue is sending tendrils of hunger up from my stomach. Before I know it, though, the clock is striking 12 and, unlike the city celebrations I remember, there’s a moment of silence.

There is a more meaningful and less physical affirmation of love in the New Year, here at Joshua Tree. Hands are held slightly tighter, gazes lift to the sky and its wonderful bounty of stars. The moment passes when a single clear voice begins singing Auld Lang Syne, somewhere in the night. We
all join in.

Surrounded by strangers, I feel, in that moment, completely at home. The year has begun well.

Tweets by @forbes_india
Kiran Nagarkar: I write because I want to be read
The ecommerce boom: A reality check

The end of the road for Intel?