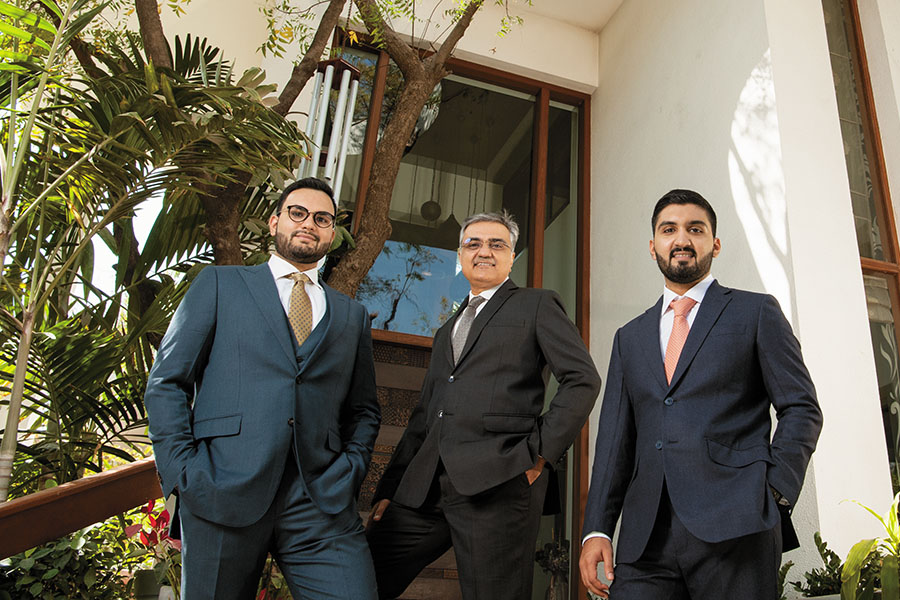 Sandeep Engineer (centre) with sons Kairav (left) and Saumya
Image: Mexy Xavier
In the 2012 Salman Khan-starrer Dabangg 2, a fight sequence between the protagonist and a bunch of heavies with both sides brandishing pipes, a la the lightsabre duels in the Star Wars capers, drew hoots and whistles from audiences. The 20-second scene also had a huge rub-off on the maker of the pipes, which suddenly gained recognition in the Indian market as ‘Dabangg pipes’ or ‘Salman-wali pipes’. Astral Pipes now had a distinct space in the lexicon of dealers, plumbers and in millions of homes. It’s this acceptance that’s played its part in Sandeep Engineer, 57, founder of Astral Pipes, finding his place for the first time in Forbes’s The World’s Billionaires List for 2019, with a net worth of $1.1 billion (by virtue of his 31.59 percent stake in Astral). “It all happened so fast,” grins the newest addition to Ahmedabad’s tycoons, sitting in his second-floor office in Astral Towers in Gujarat’s business capital in Thaltej. “I never realised (becoming a billionaire could happen). It was never my aspiration.” While the journey might seem like a blur to him, it wasn’t an easy one.

***** At 23, with no background in business, Engineer wanted to create something of his own. After working at Cadila Laboratories (now Cadila Healthcare) in Maninagar, Ahmedabad, for two-and-a-half years since 1981, he decided to turn entrepreneur. His first stint was as a distributor of flavoured Isabgol, a popular home remedy for constipation, across Ahmedabad.

“Shopkeepers would want me to give products on credit, even decorate their counters and then they would say, only if it sells we will make an invoice or else we will keep them [products] without one,” recounts Engineer. The venture shut down in a couple of years, leaving him with a loss of ₹5,000, no loose change in the early ’80s. In 1987, he leaned on Pankaj Patel, a second-generation pharma billionaire and now chairman of Cadila Healthcare, for advice. Patel suggested he try his luck with active pharmaceuticals ingredients, or substances used in a finished pharma product, via a company he founded called Shree Chemicals. “Pankajbhai guided me through the process; he is one of the biggest mentors I have. He gave me the [idea for the] product and a consultant. He told me, ‘Make as much as you can, we [Cadila] will buy’,” explains Engineer. However, Cadila would reject over half of his products, since quality was not as per required standards. Eventually, the product became obsolete, and Engineer had to stop manufacturing it. He refused to give up. With another company, Kairav Chemicals, he moved into another product line. “With Kairav, initially we passed through phases of quality issues as well. As we grew in pharma, we realised that growing in just one molecule will not help.” Kairav Chemicals continued to do fairly well till Engineer sold it off about five years back. Still, Engineer hadn’t found his true calling. That came with CPVC, or chlorinated polyvinyl chloride, pipes, which he discovered serendipitously in the US. Engineer’s uncle introduced him to CPVC since he was head of R&D at BF Goodrich Performance Materials (today’s Lubrizol) in the US, the world’s largest manufacturer of CPVC pipes. It was then that he realised their potential. Engineer returned and floated Astral Poly Technik in 1998. “When I launched CPVC pipes, no one accepted them; we had only brought the industrial CPVC pipe to India, not the plumbing one. And the market did not accept it for the first couple of years. We were hardly processing 5 percent of our total capacity. There were huge losses that kept mounting up,” he says. It was only when Astral moved into plumbing in 2001 that CVPC pipes began to be preferred over galvanised iron (GI) ones. “We started having plumber meets, training them how to use the pipes correctly. Then, since our pipes were more expensive than the GI ones, I brought down prices by 20-25 percent so that we could sell larger volumes.” Since 2003, Astral has not looked back. From ₹15 crore, it grew to ₹25 crore in a year and, in 2007, when Astral had a top line of ₹60 crore, Engineer decided to take the company public. With the ₹35 crore raised from the IPO, Astral completed its product line in the CPVC segment and kept growing at a 20 percent compound annual rate for 12 years, starting 2007. In 2011, Engineer’s eldest son, Kairav, came on board. Now 30, he explains why Astral Poly Technik had to be rebranded Astral Pipes: “We were more of a project-driven company, but we wanted to grow in the retail segment as well. Also, when we used to say Astral Poly Technik, people would associate us with a college! So we changed it to Astral Pipes.” Kairav firmly believed that if a cement company can create a brand out of its product, why can’t pipes do the same? And so, at a time when none of its competitors was thinking brand, Astral was pumping 1.5-2 percent of its top line into marketing. “We were there in almost all geographies, barring a few. People at the project level knew of us, but few retailers did and there was a lack of brand recall. Since the plumbers back then didn’t have a choice, they would just ask for a ‘pipe’ and the dealer would push for the product which would give maximum margins,” adds Kairav. Apart from having plumber meets and workshops for consultants, dealers, developers and architects, Astral needed to do something extraordinary for maximum impact. “There are two things that work well in this country: Cricket and Bollywood. We decided to tap into both, by having Salman Khan as our brand ambassador since 2014. And this year, we are sponsoring Rajasthan Royals, KKR and Sunrisers Hyderabad (in the IPL),” says Kairav. The Engineers will promote the brand ResiQuick, the adhesive Astral acquired in 2014.

Astral raised ₹35 crore from its IPO and grew at 20 percent CAGR for 12 years, starting 2007. It enjoys a 25 percent market share

Astral is a clear market leader with a share of 25-plus percent in the plumbing and drainage sectors, but moving into adhesives is a calculated risk that the senior Engineer has taken. He explains, “Our investors felt that Astral is a high-risk company since we are 60 percent dependent on Lubrizol for CPVC. If Lubrizol were to go through any major changes, Astral would be impacted severely. Moving into adhesives has helped us distribute the risks and we realised there was no No 2 player in the segment (after Pidilite’s Fevicol).” In 2014, Astral acquired an 80 percent stake for ₹44 crore in the British adhesive company Seal it Services. It followed it up with a buyout of a 76 percent equity stake in the Kanpur-based Resinova Chemie for ₹212.8 crore, which gave it the brand ResiQuick, an instant adhesive. Vijay Parikh, former managing director of Resinova, believes Astral has helped his brands get more visibility. “I didn’t give much importance to branding. Once Astral took charge, it brought a brand ambassador on board which helped immensely and gave the brands the exposure they needed,” he explains. Engineer’s younger son Saumya, who looks after the segment and who joined the company in 2014, says: “When I was in my junior years in Arizona State University, I had no intentions of coming back to India. But there were two acquisitions that happened around the time I got done with college, so I decided to come and join Astral.”  The Engineers’ most recent acquisition, of Rex Polyextrusion for ₹147.50 crore six months back, is evidence of the de-risking strategy. With the Sangli, Maharashtra-headquartered Rex, which makes double-wall corrugated pipes, Astral has entered the infrastructure segment. Kairav says, “The company has about 5,200 employees, six factories across India and three factories for adhesives, one each in the UK, the US and Kenya. This year Astral is expected to earn ₹2,600-2,700 crore as net revenue.”

If there is something that the sons have picked from their father, Saumya, 27, says, “It is the ability to take decisions, freedom to make mistakes and rely on our gut-feeling. We encourage our respective teams to do the same.” Parikh also has words of praise for Engineer. “Sandeepbhai eats, sleeps and drinks Astral! The reason why he is where he is today is because he ensures all his employees and partners grow along with the company,” he says. The philanthrocapitalist is alive in the tycoon, what with Engineer setting up a Yog Sadhna Kendra, a yoga centre, which is run by the Astral Charitable Trust. Currently, the trust is working on developing India’s first animal rescue ambulance.  For a man who has had his share of setbacks before the billions, resilience is a virtue. “If you have challenges, hang in there because there is always a way out. The bad times eventually pass and there is a future. The more the challenges, the better you shape up.” The ups and downs have also made Engineer philosophical. “Everything is like [a game of] snakes and ladders, you reach the top and then you are at zero.” He says that in the context of one of his early failures. The fear of zero, though, is unlikely to haunt him anymore.