The long road ahead for electric vehicles

The government has decided to stop the sale of petrol and diesel cars by 2030. But is the country ready? 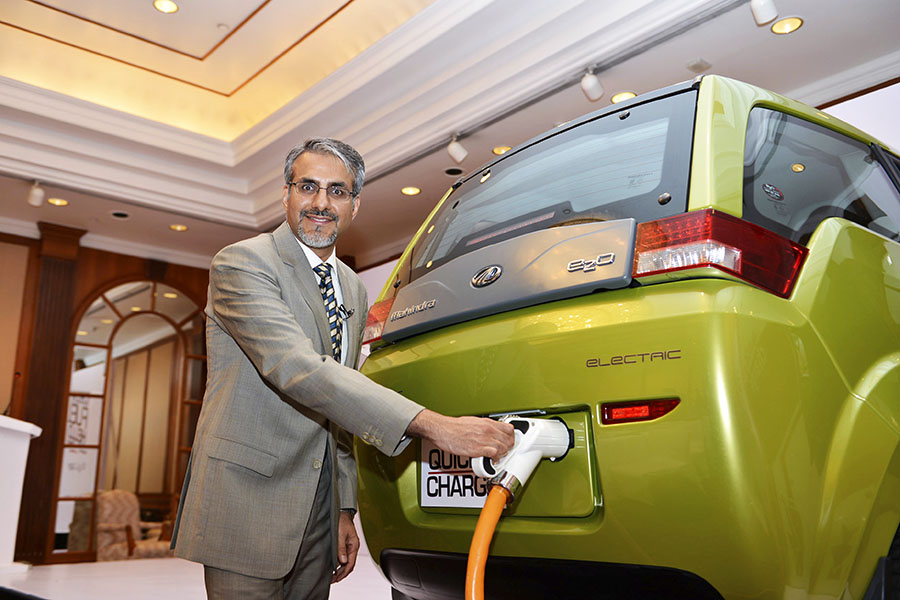 For a country that finds multiple mentions on the World Health Organization’s (WHO) list of the world’s most polluted cities, it’s hard to imagine a future free of sputtering diesel engines and noxious fumes.

While Delhi managed to shed its 2014 tag of being the most polluted city in the world, it is still grappling with vehicular emissions leading to unprecedented levels of pollution. The city’s periodic policy of keeping odd and even numbered vehicles off the road on alternate days threw open a debate, and most experts concur that it may not be a viable alternative in the long run.

In such a backdrop, then power minister Piyush Goyal’s announcement in April, that the country would stop selling petrol and diesel cars by 2030, sounds momentous. The move is particularly promising for the electric vehicle (EV) sector that is estimated to be worth $731 billion globally by 2027, according to a report from research firm IDTechEx. But does India have the infrastructure or the demand to meet the target?

According to Alok Ray of the Society of Manufacturers of Electric Vehicles (SMEV), India is yet to warm up to EVs: Only 25,000 were sold in India in 2016 (of which just 2,000 were four-wheelers) compared with the 159,000 sold in the US in the same year. Besides, the Mahindra Group is the only manufacturer of EVs in India. The group acquired Reva Electric Car Company from founder and green entrepreneur Chetan Maini in 2010 and the company’s EV division, Mahindra Electric Mobility, now offers three all-electric, emission-free vehicles—the e2o, the eVerito, and the eSupro.

But despite the slow growth of the sector over the past decade, the government’s goals have re-energised EV enthusiasts. “What’s been happening in the past six to twelve months is a movement I haven’t seen before,” says Maini who stepped down as CEO of Mahindra Reva in 2015.

During an interview with Forbes India in New York, Anand Mahindra, the chairman of the Mahindra Group, agrees. “That one statement by the government [to aim for an all-electric fleet by 2030] has attracted the entire EV ecosystem in the country,” says Mahindra. “Sometimes, one should not question the practicality of it. This is a desirable goal for India.”

While EV veteran Mahindra hasn’t seen much sales over the years, given the recent drive, the company is tapping newer avenues to push the brand. “Tesla was not known a few years ago, but it is today a household name,” says Mahindra. “As the world turns to electric cars, it levels the playing field for challenger brands like us.”

Adds Mahesh Babu, CEO of Mahindra Electric, “The focus is mainly on public transport and vehicles used by shared mobility.” He cites the economics of focusing on deals with fleets before taking them to individual customers—the more a vehicle is driven, the more the investment in an EV makes sense as fuel cost savings make up for higher upfront capital costs. “The next step for us is buses,” says Babu.

In April, Mahindra Electric announced that it will begin sales of electric buses in 2018; in May, it struck up a partnership with online ride-hailing platform Ola to provide it with 100 of their e2o hatchbacks. Ola is rolling out these e-taxis and an additional 100 electric rickshaws in Nagpur with an investment of
₹50 crore, and reportedly has plans to invest $2 billion in EV fleets across the country by 2020. 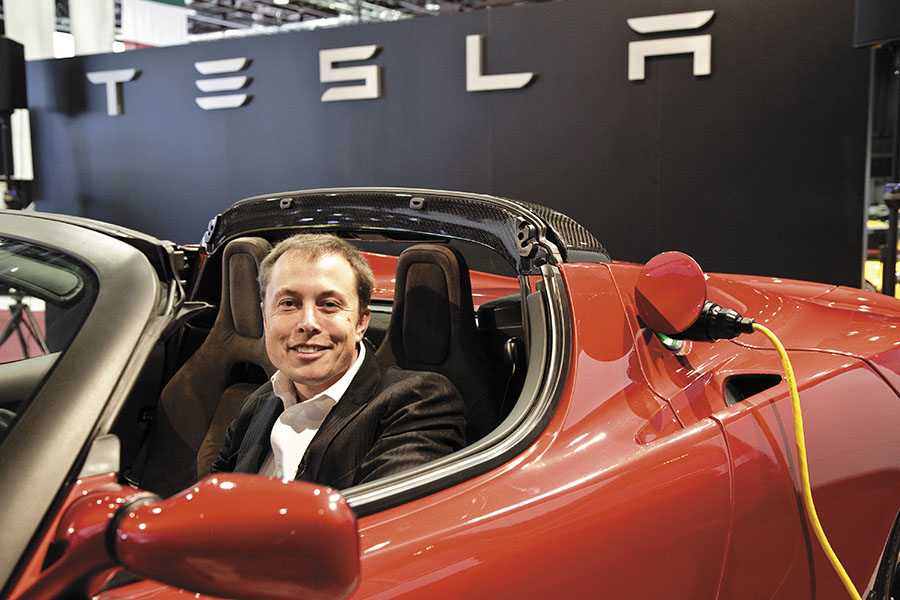 Elon Musk, CEO of Tesla Motors. There is buzz that Teslas will soon be zooming on Indian roads
Image: James Leynse / Corbis via Getty Images

Mahindra may soon have some competition. There was much buzz around US-based EV giant Tesla entering the Indian market until a series of tweets from founder and CEO Elon Musk in May indicated that his India plans were on hold. However, on June 14, he revealed that he was “in discussions with the government of India” regarding import duties and restrictions “until a local factory is built”, reigniting hope that the world’s most hyped EV will soon be zooming on Indian roads.

But Tesla will have to significantly rework its offerings if it hopes to sell en masse to Indian consumers. Price-conscious Indian buyers are likely to be put off by the hefty $90,000 (about ₹57.5 lakh) tag of the company’s flagship Model S, when they have Mahindra’s compact e2oPlus starting at ₹8 lakh.

“Even the cheapest Tesla is really expensive for the Indian market,” says Rahul Tongia, a fellow at the Brookings Institution, a non-profit public policy organisation based in Washington DC. Of course, that doesn’t prevent Tesla from targeting the large luxury market here, worth an estimated $18.5 billion. “A niche in India is bigger than some countries in Europe,” says Tongia. But that is unlikely to help achieve the country’s 100 percent e-vehicle goal.

Building an EV friendly country goes beyond just the vehicles themselves. One of the biggest hurdles to EV rollouts the world over has been the dearth of charging infrastructure, and the lack of understanding of how charging will interact with the grid.EVs need to be plugged in and charged after some kilometres, and without charging stations as conveniently located as petrol pumps, they won’t be attractive sales propositions.

Under GST, tax on full-electric four-wheelers have dropped to 12%

Mahindra’s e2o currently has a range of about 110 km per charge, and Babu says they are developing a model in the 250 km range. But stronger batteries will increase costs and offset affordability.

To be sure, battery costs are dropping precipitously, from over $1,000 per kilowatt hour (kWh) in 2007, to around $400 per kWh in 2014. But installing charging infrastructure is the critical first step of launching EVs. Mahindra Electric has set up around 50 charging stations in the country and is encouraging oil companies to allow charging at petrol pumps. The National Thermal Power Corporation (NTPC), the power utility behemoth, recently forayed into clean energy infrastructure by setting up two charging points in the National Capital Region (NCR) and has plans to install at least 20 more.

Startups are also beginning to look at ways to capitalise on an all-electric future. Earlier this year, Maini started SUN Mobility, a joint venture between Virya Mobility 5.0 and SUN New Energy Systems, the SUN Group’s investment arm. The company plans to manufacture smart, replaceable batteries for electric cars and build charging stations across the country that will be powered by renewable energy. In July, the company inked a pact with commercial vehicle maker Ashok Leyland to provide world-class solutions in the area of clean energy and electric mobility.

Maini started SUN Mobility to tackle the biggest obstacles to EVs—what he calls the “emotional” side, or customer anxiety over range and charging times. “Unless we find solutions to fundamentally resolve these problems, you won’t have electric vehicles,” he says. Average charging times for EV batteries are around eight hours, with the fastest chargers refilling a battery in four hours. SUN Mobility is trying to tackle such long durations with battery swaps, in which customers can switch their drained batteries with fully charged ones at designated points. As EV batteries become more standardised, Maini sees pay-for-use swapping stations as an integral part of the urban ecosystem in the future.

With SUN Mobility, Maini says he wanted to design an open architecture company that could be accessible to multiple players in the sector. “That’s harder to do in a company that’s only building vehicles,” he says.

Of course, none of this will move without the right policies in place. While Goyal had made lofty statements, the government has yet to unveil a long-term, comprehensive strategy for the sector. EVs have clear incentives under GST, with the tax rate on full-electric four-wheelers dropping from 20.5 percent to 12 percent, compared with 28 percent for petrol and diesel cars. “But the government gives a very small subsidy to our customers, while other governments give a much larger one,” says Babu, referring to China’s large state incentives such as tax exemptions to kickstart EV sales. China is now the world’s largest market for EVs.

“We will need transitional support,” says Anand Mahindra, but added that the measures should not be permanent. “Till the price of batteries decline and the sticker price drops, the government should support with a subsidy that declines over time. That will also be good for the industry as we will know that the subsidy will vanish at the end of a period and before that we have to be ready.”

“If you make this an economic no-brainer for the end customer, they will do it,” says Tongia. For EVs, this largely means bringing down the price of the battery and powertrain. Currently, the lithium batteries and powertrains used in EVs are imported from China, but Ray from SMEV and others prefer policies to support production of the whole supply chain.

According to some, the government has left a critical piece out of its EV plan: The hybrid. An electric vehicle with a small fuel tank, these cars are highly efficient, and assuage the “emotional side” of the EV conundrum. Hybrids are not accorded any incentives under the new GST regime, and taxes on the vehicles are set at 43 percent.

“I think the country needs solutions that are more ‘jump’ than incremental,” says Maini, adding that even though hybrids have been in the market for 15 to 20 years, they have not gained traction in India.

In a recent media report, Vikram Pawah, president, BMW India said the category was ignored by the government and he was disappointed with the lack of incentives for hybrids.

Tongia agrees that hybrids will play their role until the time India can fully adopt EVs. While India may not be able to go 100 percent EV by 2030, the country will benefit even if the goal is partially met. “You will get 50 to 80 percent of the benefits with 20 percent of users,” he says, referring to the impact on urban air pollution.

The opportunities that will arise from a whole new mode of transportation will be huge and ripe for forward thinking entrepreneurs to take advantage of.

The ride won’t be easy: Vehicles of the future will be heavily dependent on software, and the interaction of thousands of high-powered batteries with the grid will be a whole new challenge.

But with over a million Indians dying of pollution every year, overcoming these challenges will be more important than ever.