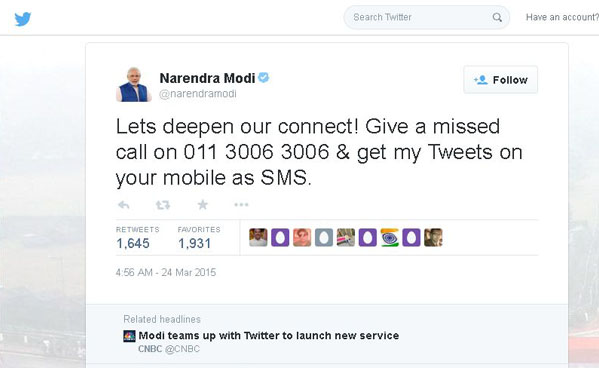 With a tweet, Prime Minister Narendra Modi (@narendramodi) launched #TwitterSamvad, a service where 16 government accounts (including that of PM and various chief ministers, Indian Railways, The Indian Army, etc) will now be able to send their tweets as an SMS to Indian citizens. It is aimed to boost the nation’s e-governance plans by helping government bodies and leaders communicate directly with citizens on a daily basis via tweets and SMS on their mobile devices. With Twitter Samvad, every day, a set of curated tweets will be delivered from the government and leaders’ accounts to mobile users across the country as SMSes.

Updates on government services, policies and activities will be delivered to any user with a mobile device who signs up for the service with each of the 16 launch partners. Anyone with a mobile phone, with or without an internet data plan, can register for the service by giving a missed call to a unique number for each of the 16 partners. Twitter Samvad can also be used during emergency with the ability to deliver live updates by government bodies, including time sensitive information like law and order situations as well as details about any rescue efforts.

Twitter, launched 9 years ago, was invented on SMS to begin with. So, in a way, it’s going back to its roots in India with the launch of Twitter Samvad. 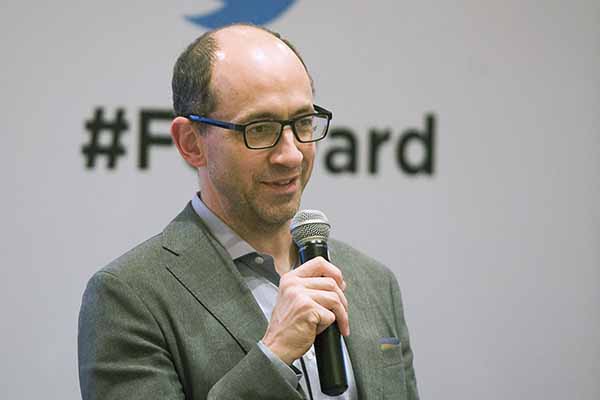 Twitter CEO Dick Costolo, said, “Based on Indian technological innovation, Twitter Samvad is dedicated and specially built for the largest democracy of the world. The 2014 Lok Sabha elections were the first-ever ‘Twitter Elections’ in India and we want to continue contributing to the development of digital governance in India. As part of the Prime Minister’s Digital India initiative, this tweet-powered service enables citizens to be the first to know about the government’s actions by receiving political content real-time on their mobile devices anywhere in the country.” Twitter Samvad will act as a mobile microphone for people using it, believes Costolo.

In his first-ever visit to India, he said India is the fastest growing market for Twitter and he is ready to take the acquisition route to ramp up innovation for the platform. Twitter had recently acquired an Indian company ZipDial which has led to the Twitter Samvad initiative launched yesterday. Rishi Jaitly, Twitter’s Market Director for India and Southeast Asia, said, “We are proud to have launched a service here that is for the people and of the people. This can eventually give every political leader and every government organisation a mobile microphone to connect with each Indian, whether in Imphal or in Diu or in Leh or in Puducherry.”

Here is a list of a 16 government partners who have participated in the launch of Twitter Samvad:

Tweets by @forbesindia
The multiplex-mall equation
'Rent is the last consideration': Atul Ruia