When art becomes a dialogue between faiths 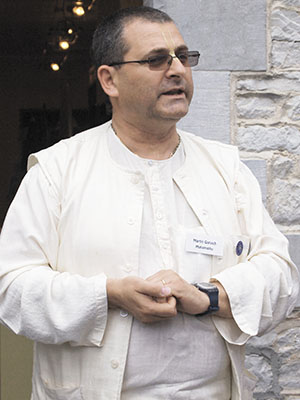 Martin Gurvich is the founder of the Museum of Sacred Art in Radhadesh, Belgium. The son of famous Uruguayan artist José Gurvich, Martin’s deep involvement with spirituality and the Iskcon movement has found manifestation in the ongoing Sacred Arts Festival at New Delhi’s Lalit Kala Akademi, which has been curated by Sushma K Bahl. Excerpts from an interview:

Q. What made you start the Museum of Spiritual Arts?
Martin Gurvich: It is a spiritual journey that started after my university studies in the US and after many years of practicing Gaudiya Vaishnava and serving Iskcon. The art part came out because of my previous life: My father was a very well-known artist and from there arose the interest. And there was a connect with Indian art, and Indian spiritual art. That connection started about five years ago with the humble attempt to have a gallery or a museum in Radhadesh, where I live. It just focussed on traditional art, mainly Vaishnava art from Rajasthan and Gujarat. Then it became a journey… one spiritual journey within another spiritual journey. I made a big collection of spiritual Indian art, including contemporary, tribal art. It was a small project with maybe 100, 200 works of art.

There is now one museum in Belgium, one in Italy. We are hoping to open more branches where there are different Iskcon projects. And now we have this big art project called ‘Forms of Devotion’ in India this year.

Q. How did you get introduced to Indian art?
MG: It was quite abrupt. I was studying political science at the University of Syracuse in the US, and although it was not overnight, but quite suddenly, I began to feel the need for spiritual practice and philosophy. So I started to read books on Buddhism and Hinduism, different interpretations of Hinduism. And then my interest became quite strong, and my interest for my regular studies and in other things dwindled. There was a very strong calling from within me to go to India, and I began to make arrangements to come to this country.

I had seen the Hare Krishna movement in New York, when I lived in Manhattan for many years, but I was a child at that time. I met the devotees in a serious way in Paris in 1982. In 1989, I came to Mumbai, and although I had been a devotee for seven years by then, it was still a cultural shock when I came here. Since then, I have been coming to India very often, for pilgrimages of course, and we have a large Indian boutique in Radhadesh and I had been shopping for that for the past 15 years.

Q. When did the process of gathering Indian art for Mosa (museum) begin?
MG: For the last five years, we have travelled with the art project, and have met a lot of artists in small villages, in big cities, famous artists, young artists. I began in 2007 when the focus was on traditional art. So I would travel a lot to Rajasthan and Mysore, and started with a collection of art in the Tanjore and Mysore styles, patachitra, Rajasthan miniatures, pichwai.

We officially started the museum (Mosa) in 2010—Hariprasad Chaurasia came for the inaugural concert—and it was the beginning of a small project. But it didn’t stop there. I wanted to do more about spirituality; not only traditional, but in a bigger context. But I had a lot of apprehensions about contemporary art, not just in the Indian context, even internationally. 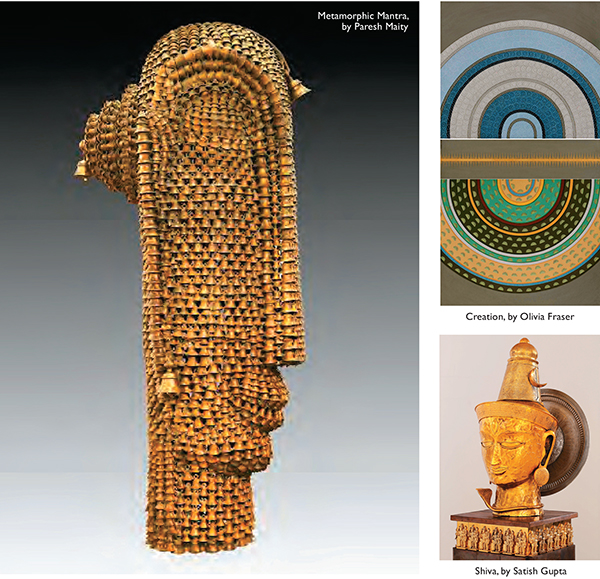 Q. What was the reason for this apprehension?
I had a lot of prejudices against it; I thought it was straying from the real aesthetics of art… basically, it was generalisation that is never good in any field, not even in art.

I am involved in a museum of my father’s work since 2001 in Montevideo, Uruguay, and its focus was mainly on modern art and the masters. I didn’t want to do much with contemporary art. The openness to contemporary art came from the Indian side... I was introduced to it by Sushma [Bahl], and then, it was a whole lot of opening up to such art in the Indian context and also in the South American context; we now do shows of contemporary artists in Uruguay. It had an impact on my Western art sensibilities.

And it has been a journey of discovery, of India, of painting styles, of media, like sculpture and installations and video. The more we travelled, the more we saw how wide the spectrum of Indian art and Indian spiritual art was. That is why the book [a two-volume book called Forms of Devotion: The Spiritual in Indian Art accompanies the show] became so big; because we kept travelling, and kept discovering Indian artists.

Sushma Bahl: Once we had this discovery, it led us to the spiritual tradition. It was another strand that was quite revealing.

MG: We started with traditional art, mainly Hindu and Vaishnav. But then we went through contemporary art, and after meeting artists, we discovered so many different spiritual traditions within the Indian context which represent all the faiths in the world.

Q. What kind of overlaps have you seen between the different faiths and painting traditions in India? Between symbolism and characters and narratives?
SB: We have seen a lot of overlaps. Especially in the way contemporary artists are borrowing from traditions, and traditional artists are taking from contemporary art. For example, the works of Mahavir Swamy show Ganesha sitting with his family and flying kites. His style is that of Bikaner, and he uses very traditional colours.

(Bahl shows an image of a sculpture made by fashion designer Rajesh Pratap Singh. It depicts Gautam Buddha seated in a meditative posture, but it is made entirely of brass scissors, something that Singh uses extensively in his own profession. Not only is it an entirely contemporary take on the traditional form of the meditating Buddha, it also represents the clash of Buddhism’s non-violent philosophy and the inherent violence embodied in an instrument like the scissor.)

MG: That is what is unique to India: You have modernity and tradition co-existing; sometimes with a little tension, but many times with no tension. There are contemporary artists who don’t think highly of traditional artists, but there are also a lot of contemporary artists who respect good traditional artists for their work, dedication and quality. There is a lot of good dialogue between traditionalists and modernists. And this is what the project is about: About dialogue between different faiths, styles of art, taking out judgements that we have about different art forms. 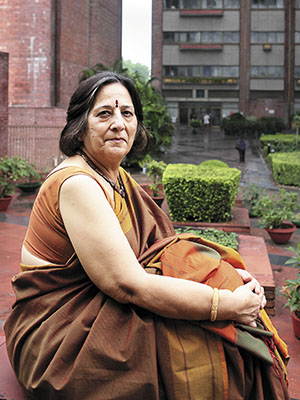 Q. This must require a certain level of knowledge of the subject and the context of the religion.
MG: You have some artists who are deeply into spirituality and have a very specific knowledge. Others paint about spiritualism without deep knowledge or understanding. We have tried to be very open and include everybody, including the identity and philosophy that they are representing. There are over 250 artists in the collection with a vast majority from India. But we also wanted to open it up to those who have historically had an Indian influence. For example, we have artists from Bali, and Westerners who have taken up Hinduism in the last 30 or 40 years.

Q.  What kind of Western influences do you see in the art of Westerners that is focussed on Indian spiritualism?
MG: It is mainly focussed on artists who are connected with Iskcon, and the traditions that Iskcon represent, which is Vaishnavism. Most of the paintings are representations of stories from the Bhagvad Gita, the Chaitanya Charitamrita. Many of these paintings were used to illustrate the books of the Iskcon founder in the 1960s, and they have been published in a lot of other places. So they have a Western style of depiction, but of Indian stories.

SB: I am thinking of Gyananda’s Mahabharat series: One of his paintings is actually influenced by [Italian painter Michelangelo Merisi da] Caravaggio. There are elements like the play of light and shade, in terms of colours, even in terms of framing.

Q. Where else are you planning to take the exhibition?
MG: Funding is always a major obstacle. I invested my own money to a certain degree to invest in the research project, to buy the initial art of the main project, and also commission a film by Gautam Ghose. [The film, titled Studios of Devotion, captures artists at work across India.] But we would like to travel with the exhibits [about 300 of them]. The show is according to the venue, and the interests of the venue. We are flexible about how the show can manifest; we would like to retain the main theme, but the works that are on display can vary, depending on the venue, whether it is more traditional or contemporary.

SB: It is definitely going to Thailand and Montevideo (Uruguay). We are talking about Kolkata and Mumbai, but it depends on the space we get.

At Lalit Kala Akademi, for instance, we could have a gurbani on one day, and sufi music on another. There will be performances along with the exhibition of paintings. And we don’t plan to show the exhibition in separate chunks; like this is Hindu art, this is Islamic art, or this is digital art and this is traditional art. It will be all inclusive and thematically connected; for example, a theme of telling tales, or of pilgrims and pilgrimages. And we won’t worry about what medium, what styles, what faiths. It is all about the philosophy of ‘live and let live’.

(The Sacred Arts Festival is on at the Lalit Kala Akademi, New Delhi, till April 26)

Tweets by @forbesindia
Inox: The wind beneath its wings
Cyanogen giving Apple, Google a run for their money