How Adi Godrej's Daughter Nisa is Calling the Shots

Inside the corridors of power at Godrej Industries, Adi Godrej’s younger daughter seems determined to make a mark 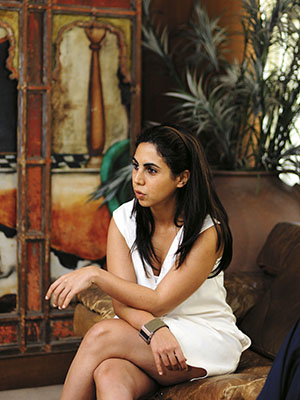 Image: Soumik Kar / Outlook
She is her dad's ear and is able to influence his decision with logic

Name: Nisa Godrej
Age: 34
Profile: President, human capital and innovation
Education: BSc, The Wharton school of Pennsylvania; MBA, Harvard Business School
How she is changing the way the company works: She is bringing in a more performance-oriented culture

Nisaba, or ‘Nisa’ as she is called, may be 10 years younger than her sister Tanya Dubash. That simply meant that Tanya had a huge head start over her. Yet, every time there is any water cooler conversation around a possible successor to chairman Adi Godrej, Nisa’s name is likely to emerge as the hot favourite.

The reasons aren’t hard to find: She is bright and intelligent, with a mind of her own, as one would expect of any Harvard Business School graduate. At 34, Nisa is willing to put in long hours at work, displaying the kind of aggression and drive that neither Tanya, 44, nor her younger brother Pirojsha, 31, have so far demonstrated.

Tanya may be temperamentally different, but she’s also calm, pragmatic and a good listener—qualities perhaps inherited from her father and uncle Nadir. Nisa, on the other hand, is known to be pushy and almost always able to get her way. Insiders say that one of her biggest strengths is that she has her dad's ear and is able to influence his big decisions with her logic. In the past five years, almost every major senior management change in the Godrej group is said to be, in some way or the other, engineered by her.

Surprisingly, almost all senior level exits have been that of loyal confidants of her father. As a result, a spate of CXOs across the group is said to have suddenly fallen out of favour with the mercurial Nisa and ended up being shown the door by her father. So much so that the group’s warm, fuzzy and paternalistic image as an employer has been replaced overnight by an almost tough-as-nails culture that spares no one, especially those who don’t see eye-to-eye with Nisa. (Nisa Godrej declined to participate in this story.)

This obsession for radical surgery was evident even during Nisa’s very first assignment at Godrej Agrovet, which was a sleepy little part of the group’s portfolio, till Nisa began to shake things up.

Run by a Godrej lifer Chandra-sekhar Vaidya, it had been an underperformer: Its main feeds business had been hit hard due to bird flu and sales were stagnant. Aadhaar, a rural retail initiative, was struggling to stay afloat and people were beginning to jump ship.

Something urgent had to be done, but what happened shocked even the company loyalists. The top management was changed overnight and Balram Yadav was moved three rungs up to take over as chief executive of the company. It sent a shudder through the organisation but the message was clear: Only those who perform will be rewarded. More importantly, seniority was no longer a ground for promotion or staying on in a job. “While it was Adi’s decision, it had Nisa’s fingerprints all over it,” says a company insider. “From that day we knew things would never be the same.”

Her next move was to gradually take control of the human resource function, which was till then the preserve of Visty Banaji, an HR veteran from the Tata group. Nisa inserted Mark Kahn, a batchmate from HBS, into the department. And before Banaji could figure it out, the duo began to quietly hijack the HR agenda he had set. At an apex management council review of the group, they even proposed scrapping one of his pet projects—to hire bright undergraduates—and instead suggested that they gun for top-tier talent from the IIMs. On the face of it, it seemed like it was without any prior discussion with the head of the department.

After Banaji’s exit, it wasn’t long before Nisa herself assumed the mantle of president, human capital and innovation. Since then, it has been clear that her influence has widened. For one, she enjoys her father’s confidence and often stands up to him in meetings. (At these same meetings there’s also been some bickering with elder sister Tanya.) She was also instrumental in creating the post of chief strategy officer within the company, bringing in Vivek Gambhir, a former consultant from Bain & Co. The word is out that she wants the group to quicken the pace of transformation, and make a clear departure from the past.

What came in was the McKinsey ‘up or out’ culture where an employee either moves up in the organisation or leaves it. Incentive structures were also rejigged with top performers rewarded disproportionately. For instance, Agrovet that has performed well in the last year (it is an unlisted company) is said to have paid some employees several times their variable pay. 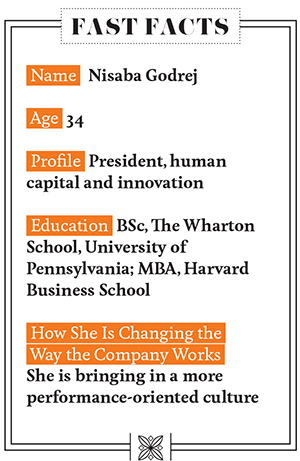 Observers who’ve seen the intense sibling rivalry from close quarters say that after assuming charge of HR, Nisa clearly has the upper hand because she has been instrumental in handpicking many of the new crop of CEOs (see box). Not all her moves have borne fruit though, leading people to believe that her growing dominance in the group isn’t always a one-way street.

Take for instance, Dalip Sehgal. Adi Godrej picked the marketing professional from Hindustan Unilever to fix a struggling Hershey’s chocolate business. Sehgal went about the operation like a ruthless surgeon. But once the task was done, he was elevated as CEO of the flagship firm, Godrej Consumer Products, shortly after old-timer Hoshidar Press had been eased out. By all accounts, Sehgal is said to have got along well with Nisa. And since performance was robust too, with GCPL recording record profits in 2010, he started to assert himself on issues as the CEO.

Just when things seemed to be coasting along, Sehgal found himself at the deep end. What exactly led to his exit remains unclear. Insiders say that at a strategic review meeting, where Tanya was presenting a long-term growth plan, Sehgal is said to have ripped apart her presentation. Tanya tried defending her point of view, but the situation got ugly. That’s when Adi Godrej stepped in and ended the meeting. A few days later, Godrej called him in and gave him the marching orders. His only consolation: He received a hefty severance pay. (Sehgal denied this version of events.)

Then there is the internation-alisation of Godrej Consumer Products. Nisa, along with Gambhir, has been largely responsible for pushing the company to expand in Africa, Latin America and South East Asia. The uptick in performance is being noticed and the stock has risen 76 percent in the last one year.

It isn’t clear how long it will take for a formal transition to take place. At 70, Adi has shown no obvious signs of slowing down. But one thing is for sure: Whether you like her or hate her, Nisa is here to stay—and she is determined to leave her imprint on the Godrej group. “We have to be thankful to her for pushing us outside our comfort zone,” says a GCPL employee. Perhaps that might be among the kindest things that employees say about Nisa.