Chetan Maini: Back in the electric mobility business

Chetan Maini had bet on electric mobility much before its time. Now, with the Centre looking to go all-electric by 2030, Maini and his Sun Mobility will play a key role in building the right ecosystem 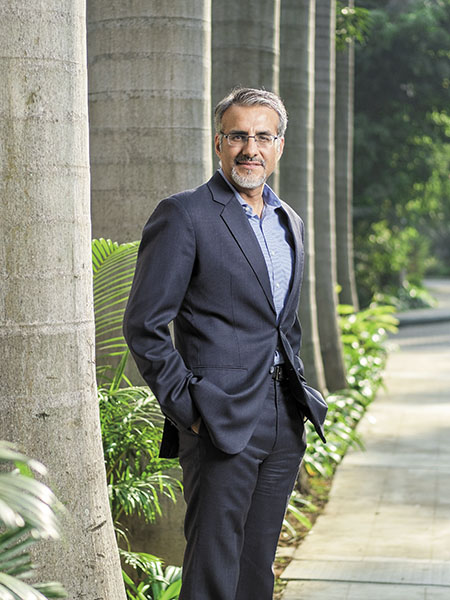 Chetan Maini isn’t new to the electric mobility space in India. In 2001, Maini, then founder and MD of Reva Electric Vehicle Company, launched Reva, India’s first mass-produced electric car. The dinky car, however, wasn’t a hit with consumers as only 3,500 units were sold between 2001 and 2010, when automaker Mahindra & Mahindra bought a controlling stake in Maini’s company. “The idea of electric vehicles (EVs) was always right. But, I think the timing was early for India as well as the world, because when we launched in the UK, Norway and other countries, we were one of the first players over there too,” says Maini.

He adds that the Reva was among the cheapest cars, at ₹2.5 lakh on road, when it was launched. It would have been even cheaper if the then Union government hadn’t abolished a subsidy of ₹75,000 and doubled the excise duty on electric cars two months before it launched. “It would have been cheaper than even a Maruti,” he says.

But mere intention may not be good enough for Goal 2030. “There are 3 million passenger vehicles sold annually in India and to replace those with EVs an ecosystem needs to be built,” says Sridhar V, partner at advisory firm Grant Thornton India.

Enter Maini again, this time with his new venture Sun Mobility, after having quit as the CEO of Mahindra Reva in 2015. (A year later, he and his family sold their residual stake in the company.) Having spent two decades in the electric mobility space and having built an electric car from scratch, Maini set out to solve one simple question: If EVs are four times more efficient than traditional internal combustion (IC) engine vehicles, why did they not take off in India in the first place?

Government policies apart, Maini concluded that three pertinent issues needed to be addressed for EVs to succeed: Cost of vehicles (of which the cost of the battery was significant), customer concerns over mileage and battery charging stations, and battery charging time. Unless these are addressed, “I think it will be difficult to have mass deployment of EVs”, says Maini.

Started in April 2017, Sun Mobility is developing smart batteries to power EVs—two-, three- and four-wheelers, and buses—and battery charging and swapping stations. “We will own the lithium ion batteries and swapping stations and build our own [electric mobility] infrastructure network in the country. We’ll also be working with multiple OEMs (original equipment manufacturers) to integrate our solutions into their products,” says Maini.

Sun Mobility is a joint partnership between Maini and Uday Khemka, vice chairman of the London-based Sun Group that has business interests in the clean technology and renewable energy sectors. “Electric mobility is one of the greatest inter-generational opportunities of our time. We do not believe that there is anyone else in India that has his [Maini’s] knowledge, passion and understanding [of the space],” Khemka tells Forbes India over telephone from London.

To begin with, Sun would focus on electric three-wheelers and buses, in particular in the shared mobility space given that there is already some momentum on those fronts. According to Maini, there are already over 1 million e-rickshaws plying in parts of Bihar, Uttar Pradesh and Delhi.

“Customers buy the electric bus without the battery, while the battery and infrastructure will come as a service on a pay per use basis,” explains Maini. “We bundle all our costs on per kilometre basis.” The concept would be the same for three-wheelers. This combination of battery and infrastructure, says Sridhar, is necessary to create an environment for people to be confident about EVs.

The lithium ion batteries that Sun is developing would be about 30 to 40 percent lighter compared to the batteries that Maini had developed at Reva Electric. Maini also claims that the new batteries could be recharged faster and would operate more efficiently in hot regions like India. And with a lot of in-built electronics, such as GSM and GPS, the batteries are a lot smarter, he adds.

In the case of a three-wheeler, Sun’s “lightweight” batteries, says Maini, could be swapped manually and would take under two minutes as compared to a regular battery charging time of five to eight hours. For buses, the batteries would be swapped by robots given that they would weigh approximately 600 kg.

Sun would initially own and operate these swapping stations but, in the long run, would move to a franchise model. Real estate costs are not a concern for Maini as he does not need a gasoline station type of infrastructure. For example, since public buses move in and out of dedicated depots, the swapping infrastructure would be set up at the depot. Likewise, such infrastructure can be set up at business parks. The company will start pilots of this technology (batteries and swapping stations) by the middle of this year and plans to scale up its production and infrastructure by the last quarter.

At this juncture, Maini does not wish to disclose the per kilometre operating cost of either a three-wheeler or a bus. But he does indicate that the cost of power could be well under ₹5 per unit, given that the cost of renewable energy, which would primarily be used to power Sun’s swapping stations, is cheap. “Deals have been done for ₹2.44 per unit (for solar energy) and ₹2.75 per unit (for wind energy). So even with wheeling charges (for energy transmission), it’s possible that you could pick up energy at under ₹5 per unit,” says Maini.

The concept of battery swapping is not new and has been around ever since the first electric cars were made back in the late 1800s and continued to exist till about 1910. “There were more electric cars on the road than gasoline cars. It was only when the electric starter came [for IC engines] that they lost out,” says Maini, an engineering postgraduate from Stanford University. The concept, at present, has been adopted successfully in certain parts of China with buses and in Taiwan with scooters.

Taipei-based Gogoro, which has raised close to $500 million in venture capital, manufactures electric scooters and has set up over 500 battery swapping stations around the city since 2015. As of September 2017, Gogoro claims to have sold over 34,000 scooters and swapped around 17,000 batteries a day. This has saved, says the company, 4.13 million litres of gasoline and reduced 8 million kg of carbon dioxide emission.

Maini is looking at creating a similar impact with Sun, but there is a difference to his approach. “Our solutions are more modular and more open architecture,” he says. Is it scalable?

In India, the adoption of a third-party electric technology for three-wheelers would be a lot easier because the “three-wheeler OEMs have very rudimentary technology”, believes Sanjay Krishnan, founder, Lithium Urban Technologies, an EV cab aggregator for corporates in Bengaluru and Delhi-NCR. When it comes to four-wheelers, the adoption could be tougher. “It’s like Toyota, Honda, Maruti and Mahindra trying to agree on one stand—it’s going to be tough as most of the OEMs are fairly evolved,” says Krishnan.

But that’s not a priority for Maini now. What is, though, is getting the idea of battery swapping kickstarted and proving that it could work. While the Niti Aayog has mooted for a battery swapping policy, Nitin Gadkari, minister for road transport and highways, thinks the concept is “not appropriate” for the country. Given Maini’s credentials, many believe he could pull it off. “I consider him as one of the best engineers to have walked on this planet. And if there is one person who can probably make it possible, it’s him,” says Krishnan.