Many conglomerates are dipping into their resources and technical expertise to build supporting infrastructure like charging stations, which will ensure electric vehicles have a smooth ride on Indian roads 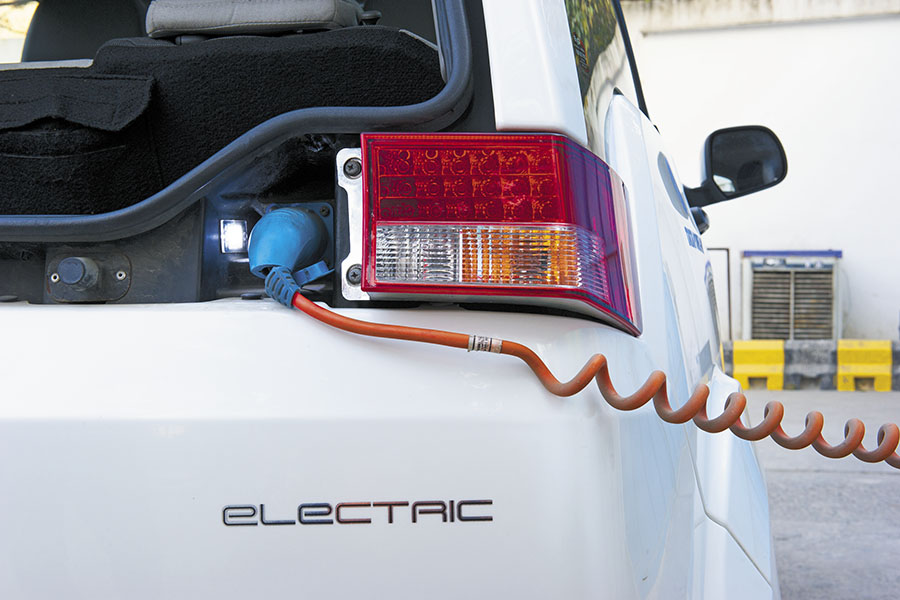 Having charging points at the right locations and informing the public about the same is essential to make India EV-ready
Image: Amit Verma

Without supporting infrastructure, an electric vehicle (EV) is just a showpiece—an innovation sitting pretty in a garage. Even as governments push to replace polluting internal combustion engines with cleaner EVs, the major impediment to their adoption is ‘range anxiety’—the fear that an electric vehicle will run out of power before it reaches its destination or a charging point.

According to the Society of Manufacturers of Electric Vehicles (SMEV), there are about 4.15 lakh electric two-wheelers, 18 lakh electric three-wheelers, 6,100 electric four-wheelers and 21 electric buses plying on Indian roads.

To that end, Indian conglomerates, with legacies spanning 18 to 100 years, have now assumed the mantle of making India EV-ready.

The companies Forbes India spoke to say they are working at a slow but steady pace, with one eye on government policies and the other on the type of EVs and charging points that emerge from manufacturers.

“We are working on three aspects: 1) Creating the necessary grid infrastructure to provide electricity on demand; 2) Physical charging infrastructure for different types of e-vehicles and chargers; and 3) Software to help customers access the charging network,” says Praveer Sinha, CEO, TPDDL. 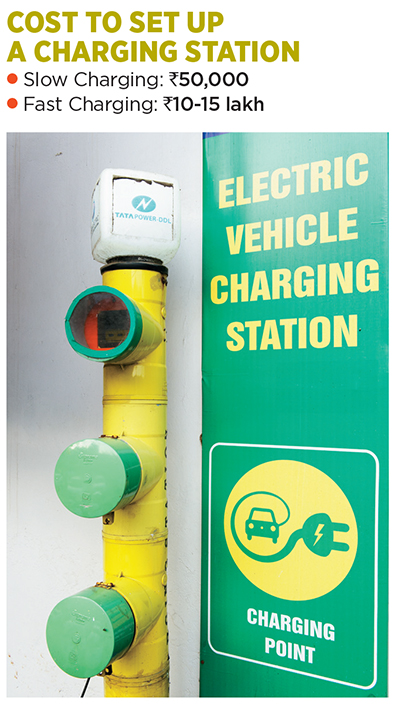 Grid and Charging Stations
The most important aspect is grid stability, to ensure it can endure any demand. “For EV charging, power is required in large quantities for a short span and that will need necessary grid and charging solutions,” says Sinha.

TPDDL has plans to set up 1,000 charging stations over the next five years in New Delhi, with an investment of ₹150 crore. It is in talks with certain shopping malls and the Delhi Metro Rail Corporation (DMRC) to set up charging points in their parking lots so that shoppers can charge their EVs while they’re parked there.

For charging points, choosing the right location is as important as setting them up. “Availability and cost of locations, especially in large cities where real estate is expensive and limited, can become a deterrent in creating charging infrastructure,” says Manasvi Manas Sharma, head of strategy at Tata Power.

In Mumbai, the Tata group has set up three charging stations: One in Vikhroli and one each at Phoenix Market City mall in Kurla and High Street Phoenix at Lower Parel to ‘charge-as-you-shop’. “The government can help earmark important locations. Some state governments are already addressing this,” adds Sharma.

Locating a Charging Point
But what is the use of a robust network if it’s not easy to locate or pay for? Unlike petrol pumps, charging stations are likely to be unmanned operations. So it will be important for the customer to be equipped with all the information necessary to make optimum use of the services.

The UK and Ireland have the Zap-Map app for Android and iOS users that gives real-time information about 5,000 locations, 8,000 devices and 14,000 connectors. “Fortum, the leading electricity retailer and charge point operator (CPO) in the Nordics, has user interface clubbing real-time charging station availability tracker with flexible payment options—a benchmark solution that can simplify end-user EV adoption,” writes Prashant Mittal, strategist, Ambit Capital, in a research note. Fortum and the Navratna company NBCC have signed a memorandum of understanding (MoU) to develop charging infrastructure across India.

TPDDL is developing an app that will provide information about charging points, cost, consumption and how much distance the EV can travel with available battery juice. This is so important that the government authorities developing EV infrastructure protocol are building this requirement into charging standards, according to Tata Power’s Sharma. The Tata group company’s charging points allow users to check charging status and units consumed.

The Cost of Charging
The cost of charging will be calculated on two parameters. One, the fixed component, or the type of infrastructure deployed and, two, energy charge, which is the amount of energy consumed in charging the vehicle, explains TPDDL’s Sinha.

TPDDL is planning to implement a variable tariff structure, where charging during peak hours will cost more. “We want to discourage the use of chargers during peak hours when electricity consumption is high,” he says. Afternoons in the summer when air-conditioners take up maximum grid load and mornings and nights in winter when most households use geysers and heaters are considered peak hours. Sharma says, “A time-of-the-day tariff structure can control charging behaviour.”

NTPC, which is evaluating its foray into the EV value chain to set up infrastructure for all vehicle segments, says its charging tariff will be different in each city based on the input power prices, battery capacities, customer price sensitivities and charging demand.

Electricity apart, major costs include installation, operations and maintenance of chargers, cost of land and even back-end power supply infrastructure. NTPC recently signed an MoU with the Jabalpur Smart City authority to cooperate on e-mobility in the city and is in talks with other city, municipal and transport corporations and potential partners like airports and metro corporations for last-mile connectivity space. “You can expect some pilot projects in the near-term,” says an NTPC spokesperson. “Given our ability to mobilise cheap capital from multiple sources, investment planning is not a big challenge.”

Like TPDDL and Tata Power, NTPC too prefers a time-of-the-day tariff structure. “To encourage early adoption of EVs, the power tariff needs to be structured at the lowest slabs. Being a regulated entity, NTPC will be able to pass on the benefits of reduced power tariffs to end consumers,” says the spokesperson.

“It is critical for the government to define whether charging solutions will be driven by the free market forces or if it will be licence-driven,” says Sharma. This policy can set the level and pace of proliferation of charging networks in the country, he adds.

Hyderabad-based Goldstone Infratech, which assembles electric buses in partnership with China’s BYD, has supplied six e-buses to the Brihanmumbai Municipal Corporation and also fulfilled a part of its 25-bus order to the Himachal Road Transport Corporation. It forged a partnership with BYD, the world’s largest electric vehicles maker, two years ago “sensing an acute need for such vehicles”, says NK Rawal, MD, Goldstone Infratech.

While Goldstone imports its electric motors, chassis and controllers from BYD, the bus body is designed in India. To meet charging requirements, it provides fast chargers at depots. Going ahead, “we would be very keen to provide e-chargers for the public when the demand develops,” adds Rawal. Goldstone is also planning to set up a greenfield electric bus manufacturing facility in South India with an investment of ₹500 crore. Its current capacity of 500 buses will be scaled up as EV adoption increases.

Goldstone is not the only Indian company to realise the potential of manufacturing EVs. JSW Energy has received a go-ahead from its board of directors to venture into EV manufacturing, energy storage and charging infrastructure either directly or by setting up subsidiaries.  With a target to launch its own “futuristic” EV by 2020, it expects to incur a capital expenditure of ₹3,500-4,000 crore.

JSW Energy had earlier signed an MoU with the Gujarat government to set up a factory to manufacture EVs and its ancillaries. While much hasn’t been said about its upcoming car, reports suggest it may make a sedan in the ₹10-12 lakh range. It is also studying off-grid solutions which will allow people to integrate rooftop solar power generation at home with batteries, once prices drop significantly, to take EV charging off the grid completely.

Likewise, Anil Agarwal-led Vedanta Resources is looking at cobalt, a byproduct of its copper mines, to aid its energy storage plans.

Other state-run entities in the EV fray include ONGC which has plans to venture into battery manufacturing units, storage facility and charging. It may use Hindustan Petroleum Corporation Limited’s (HPCL)—ONGC recently agreed to acquire 52.5 percent stake in HPCL for ₹36,915 crore—13,000 petrol pumps to set up its charging points. PGCIL and BHEL are eyeing charging infrastructure and building electric buses, cars, two-wheelers and boats, respectively.

An ideal electric vehicle ecosystem is where the EVs are charged using renewable energy, many experts believe. NTPC, which has a large solar power capacity says, “if we can own and operate the charging infrastructure and supply power from renewable sources, the whole effort will become environment friendly”.

But given the fact that India’s EV sector is in a nascent stage, idealism isn’t realistic. What will be important is to achieve the task at hand—creating a supportive infrastructure network with urgency—and doing it right.

Tweets by @forbes_india
Meet the 'Special Mentions' in this year's Forbes India 30 Under 30 list
Chetan Maini: Back in the electric mobility business