Why it pays to break the rules 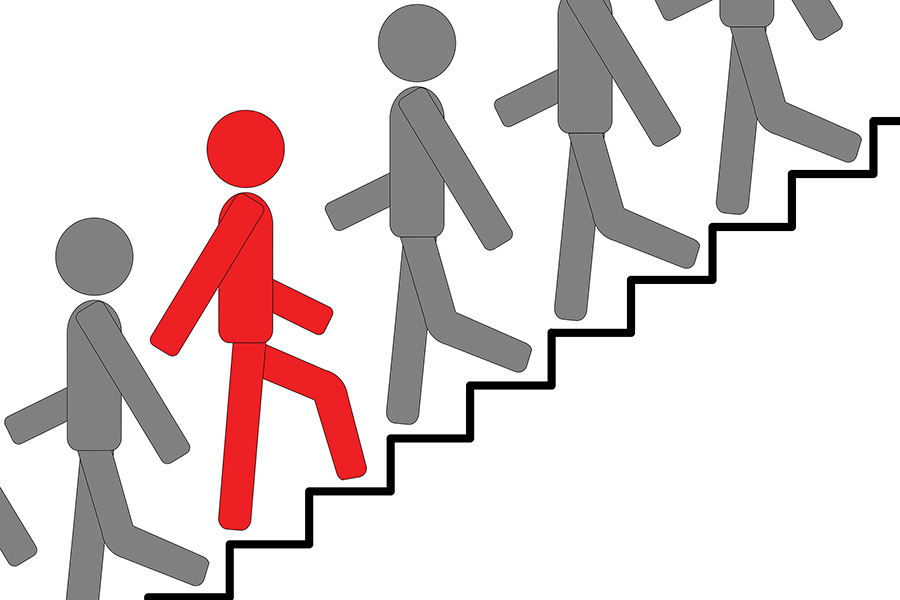 Q. How do you define ‘rebel talent’?
Rebels get a bad rap. We mostly think of them as contrarians—colleagues, friends and family members who complicate seemingly straightforward decisions and disagree when everyone else agrees. But rebels also change the world with their unconventional outlooks. In an environment that is demanding more and more innovation and reinvention, we can learn a lot from them.

I spent over a decade studying rebels at organizations around the world, from high-end boutiques in Italy’s fashion capital, to the world’s best restaurant, to a thriving fast-food chain, to an award-winning computer animation studio. We tend to think of rebels as troublemakers, particularly in the business world. People like Steve Jobs, the stories go, are creative but difficult to work with—control freaks who create chaos all around them. We need to shift our thinking: rebels can be agents of positive change, driving innovation by doing things a bit differently.
From an early age, we are taught to follow the rules, and the pressure to fit in only increases over time. But when we mindlessly accept norms rather than questioning and constructively rebelling against them, we ultimately end up stuck and unfulfilled. Rebels—those who practice ‘positive deviance’ at work and in life—might be harder to manage, but they are good for the bottom line: their passion, drive, curiosity, and creativity can raise an entire organization to a new level. Encouraging the right kind of rule-breaking is exactly what today’s leaders need to do to help their organizations adapt and thrive.

Q. You found that rebels come from all walks of life, but they all possess five characteristics of ‘rebel talent’. Please describe them.
I was able to identify five core elements of rebel talent. The first is embracing novelty—a desire to seek out challenge and the New. The second is curiosity—the impulse we all had as children to constantly ask ‘why?’ The third element is perspective, the ability to constantly broaden your view of the world and try to see it as others do. The fourth is an appreciation for diversity, a tendency to challenge predetermined social roles and reach out to those who may appear different. And the fifth is authenticity, which rebels embrace in all that they do, remaining open and vulnerable in order to connect with and learn from others.

Q. The human tendency is to prefer things that are comfortable, familiar and known. Tell us how rebels challenge this ‘status quo bias’.
Most people naturally avoid tension and conflict, but rebels embrace it. Instead of asking ‘what should I do here?’—based on what they’ve seen others do or what they’ve done before— they ask, ‘what could I do here?’ The fact is, many of the traditions and rituals we encounter in organizations and in society are a product of routine rather than thoughtful deliberation. This preference for the status quo leads us to choose activities we are familiar with, missing the opportunity that novelty represents.

In my research I found that novelty has positive effects: The more frequently people experienced novelty in their work, the more they felt satisfied with and energized by their job. Stability, by contrast, did not bring these benefits. When employees reported that their job felt ‘more or less the same every day’, their satisfaction suffered and they were more eager to move on.

Q. Are there companies that actively challenge the status quo?
Definitely, and I wish there were more of them. Pixar is one company that challenges its status quo by proactively drawing out tension and conflict. The company actually has certain days set aside where people stop doing their usual job and instead spend the entire day thinking about what is not going well at the company—on their team, in their job or in the organization as a whole. Their notes are then shared across the organization in an effort to improve ideas and ways of working. You can also hire for dissent and opposing views: Rachael Chong, CEO of the New York-based nonprofit organization Catchafire, actually seeks out dissenting opinions when she interviews job candidates, looking for people who disagree with her on some key issues.

Q. How can we know when it’s appropriate to push the boundaries and when not to?
It’s a matter of judgment. Organizations that have done this successfully make it clear when rules should be broken and when they should not. The leaders of Ariel Investments, a Chicago-based money management firm, encourage rebellion in all sorts of ways. They want people to be authentic, which includes feeling free to disagree with each other, but everyone in the firm knows which rules should never be broken. For example, before a letter goes out to a client, three people must review it for clarity, because the company’s reputation with its clients is so important. Consistency on rules such as this one helps employees know where the boundaries are.

Q. You identified eight principles of rebel leadership (see sidebar). In practice, what does it mean to ‘Learn everything and then forget everything’?
Rather than disrespecting traditions and breaking rules simply for the sake of it, effective rebels study traditions and rules carefully, gaining a deep understanding of ‘the basics’ before venturing into the New. Another key principle is to ‘Foster happy accidents’. The idea behind this is to put some thought into making sure that happy accidents happen, whether it’s a new idea that comes from a mistake or a collaboration between people from different backgrounds. Steve Jobs created happy accidents when he designed the headquarters of Pixar Animation Studios to have a large, open atrium equipped with a cafeteria, a gift shop, and screening rooms — places where people who do not usually work together can strike up conversations.

Q. Can curiosity be actively fostered?
Our willingness to explore and remain curious tends to decline the longer we’re in a job. When people are under pressure to complete their work quickly, they have no time to ask questions about broad processes or overall goals.

It takes thought and discipline to start fostering creativity and curiosity. In most organizations, leaders and employees alike receive the implicit message that asking questions is an unwanted challenge to authority. People are trained to focus on their work without looking closely at the process or their overall goals. But maintaining a sense of wonder is crucial to creativity and innovation. The most effective leaders look for ways to nurture their employees’ curiosity to fuel learning and discovery. 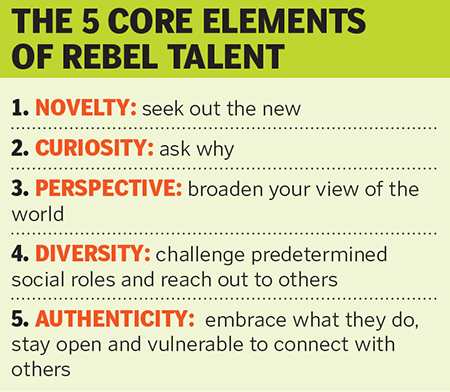 One of the companies that comes to mind is Intuit. Every year, the firm gives out awards for great innovations that employees have come up with. But there is also an award for the Best Failures: explorations that didn’t turn out well, but helped the company to learn something. The failure award even comes with a ‘failure party’. This sets up a system where people are comfortable asking questions and breaking rules, as they know they won’t be punished for experiments that falter.

Q. How can we apply the principles of rebel talent at work and in life?
Applying these principles means fighting our natural human urges for the comfortable and the familiar. We have an innate desire to be accepted by others, leading us to conform to their views, preferences and behavior. We accept the status quo, go along with existing social roles, and fall prey to unconscious biases like stereotypes. We stay narrowly focused on our own perspective, and filter information to prove ourselves right. These are all non-rebel habits we succumb to because of our human nature. Rebels know themselves, and are aware of these limits, but they reject limits on what they can accomplish.

Q. Can anyone be a rebel?
Absolutely. You just have to be willing to take risks that can be uncomfortable, and I hope readers will try to become more comfortable being uncomfortable.

I began this project by trying to understand rule-breaking in the workplace. But breaking rules, I discovered along the way, enriches every aspect of our lives. Most of us are not born rebels. But if you’re like me, after trying the rebel life, you won’t want to go back.

Francesca Gino is the Tandon Family Professor of Business Administration in the Negotiation, Organizations & Markets Unit at Harvard Business School and the author of Rebel Talent: Why it Pays to Break the Rules, At Work and in Life (Harvard Business Review Press, 2018). She is also formally affiliated with the Program on Negotiation at Harvard Law School, with the Mind, Brain, Behavior Initiative at Harvard, and with the Behavioral Insight Group at Harvard Kennedy School.
Understanding what I call your Rebel Quotient is an important first step. At www.rebeltalents.org, you’ll find a free assessment to determine which rebel ingredients come most naturally to you and where you have the most room to grow. The website also includes stories and case studies of rebel leaders.