"How is it possible," the coach of Liverpool's champions asked himself recently, "that anybody is 20 points ahead of this team?" 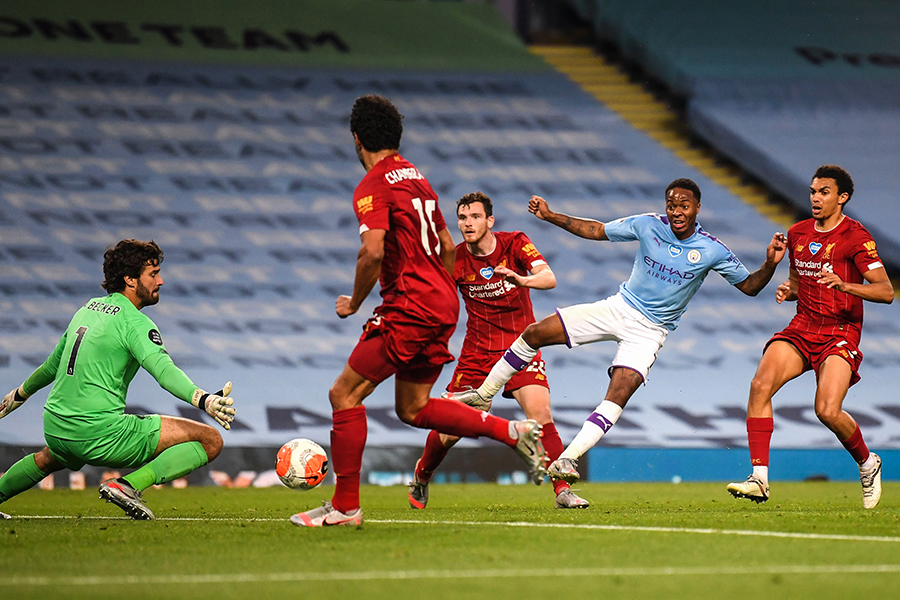 MANCHESTER, ENGLAND - JULY 02: Raheem Sterling of Manchester City shoots and it is deflected in by Alex Oxlade-Chamberlain of Liverpool for a own goal and Manchester City fourth goal during the Premier League match between Manchester City and Liverpool FC at Etihad Stadium on July 02, 2020 in Manchester, England. Football Stadiums around Europe remain empty due to the Coronavirus Pandemic as Government social distancing laws prohibit fans inside venues resulting in all fixtures being played behind closed doors.
Image: Photo by Laurence Griffiths/Getty Images

MANCHESTER, England — The thought struck Jürgen Klopp last Monday night: a couple of days before his Liverpool team played Crystal Palace, three before thousands would descend on Liverpool’s streets to celebrate the league championship, sending the smoke from firecrackers and flares billowing into the sky.

That night, Manchester City was hosting Burnley. It turned, fairly quickly, into one of those Manchester City performances: quick and beautiful and coldly ruthless. City scored three, four, five. Burnley seemed punch-drunk, unable to comprehend what was happening, just happy to survive.

And that was when it occurred to Klopp. His Liverpool team had left this City side for dust this season, establishing an insurmountable lead at the top of the Premier League. “How is it possible,” Klopp asked himself, “that anybody is 20 points ahead of this team?” It was, he thought, so unlikely as to be unthinkable.

Much of the explanation, of course, has to do with Liverpool: the relentlessness that Klopp has inculcated in his team, the group of players he calls his “mentality monsters,” the iron will and inner fire that burned off the rest of the Premier League by the turn of the year and, last week, brought the club its first domestic championship in three decades.

Liverpool’s excellence is the explicable part of what even Klopp finds inexplicable. As he has said, it is proof that he and his staff have done “at least a couple of things right.” Liverpool has won the title entirely through its own merit.

But it has done so with such ease — with more games to spare than every single one of its predecessors — because of the shortcomings of the City team it deposed, the opposing pole in the rivalry that, it seems likely, will define the early 2020s in English soccer.

Manchester City boasts the best player, Kevin De Bruyne, and the best squad in the Premier League. In Pep Guardiola, it employs the most coveted manager in the world. In 2018 and 2019, it claimed back-to-back championships playing in a style filled with precision and panache. It broke records for points claimed and goals scored and games won. It completed a clean sweep of domestic trophies. It was hailed, with good reason, as one of the greatest teams England had ever seen.

It is a team that, this season, not only remained good enough to produce a performance that took Klopp’s breath away three days before Liverpool was crowned champion; it is a team that, on Thursday night, inflicted Liverpool’s heaviest defeat in nearly three years.

That, at first glance, felt like an answer, of sorts: A statement of intent from the deposed champion, a warning shot ahead of a resumption of hostilities next season. But the more City threatened to run riot, the more it felt like a question. How can a team this good, one capable of making Liverpool seem ordinary, be so far behind?

Injuries, of course, have played its part. Losing Aymeric Laporte, in particular, and the departing Leroy Sané for a considerable proportion of the campaign was a blow. So, too, has poor planning: The decision to allow Vincent Kompany to leave at the end of last season and not replace him left City vulnerable in central defense.

But this is one of the most ambitious projects soccer has ever seen. It has been put together precisely to meet Guardiola’s specifications, and with forensic attention to detail. That it should be so delicate that a couple of injuries, or one positional shortcoming in one of the most expensive squads ever assembled, should derail it to this extent is unsatisfactory.

City has, after all, not fallen narrowly short. It has lost eight games this season: Defeat at Norwich City, newly promoted and now rock bottom, was the most eye-catching, but far more significant is its record against the league’s upper echelons. City lost both at home and away to Manchester United and to Wolves. It lost at Tottenham, it lost at Liverpool, and it surrendered its title by losing at Chelsea.

Beating Liverpool on Thursday, of course, improves that record, adds a little gloss. But this was a slightly curious game in a slightly curious circumstance: Liverpool, its intensity missing and its belief strangely fragile, simultaneously played dreadfully and created enough chances to score three goals.

City offered its guest a guard of honor at the start of the game and then promptly tore it to shreds, winning by 4-0 and having plenty of reason to believe it might have had twice that. It was a game held in an isolated state, one where the outcome had little material impact on anything — other than puncturing Liverpool’s reverie, a psychological blow that is not worthless — and where neither team was playing with any real pressure. It felt a little like an exhibition, a free hit, not quite an exception, but perhaps not evidence of a rule.

The test, now, is how Guardiola resolves the issues that have beleaguered this campaign. He will look to recruit, of course, to fill the holes in his squad: across the defensive line, certainly; a replacement for Fernandinho in midfield; and another attacking option now that Sané is off to Bayern Munich.

The emergence of Phil Foden and Eric Garcia, both excellent Thursday, will help, but reimagining the squad is not as simple as it might have been. Guardiola’s contract expires after next season; he may be rebuilding in what proves to be his last year at the club.

It is also not a panacea. City’s problem is not simply a shortage of talent. In many ways, it is absurd to suggest this squad has any shortage of talent at all. It has been undone too often this season by individual mistakes for it to be a coincidence; that hints at an occasional drift in focus.

Too many of its closest rivals have found ways to survive City’s onslaughts, and there have been times when Guardiola’s team, for so long so smooth, so confident, so devastating, has seemed a little stale, as if it is going through the motions, playing less from memory and more by rote.

After four years, it may be that it is time not just for Guardiola to draft in fresh blood but to conjure new ideas, too. Klopp is right, of course, that it is unthinkable that any team should be 20 points ahead of this Manchester City. Guardiola’s task is to make sure, this time next year, it seems impossible that it should ever have happened.