India Has Its Own Homework to Do: OECD's Angel Gurria

OECD secretary-general Angel Gurr'a tells Forbes India that though the slowdown in India is partly due to the euro zone crisis, better regulation in three key areas could help boost growth 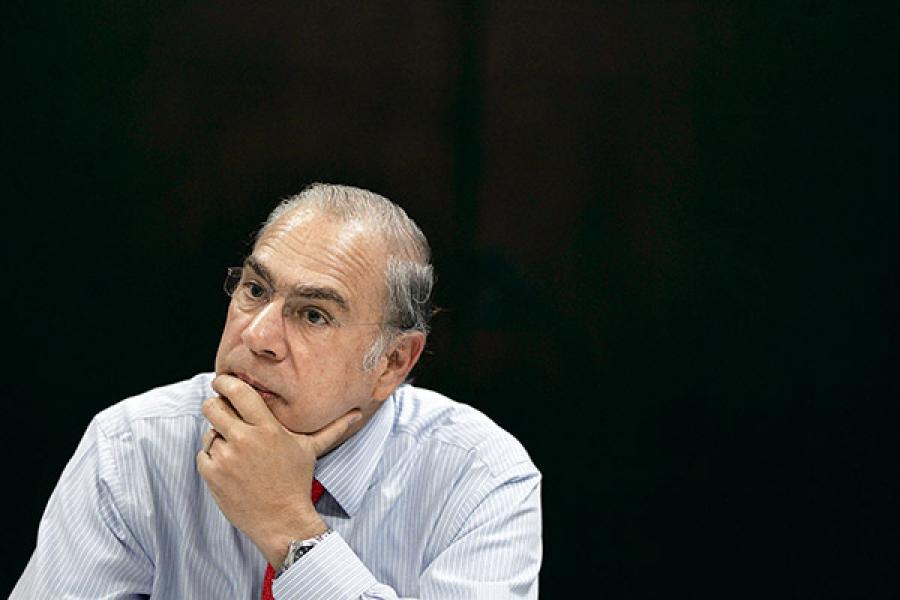 Image: Ueslei Marcelino / Reuters
Angel Gurría, secretary-general,Organisation for Economic Co-operation and Development. He will be arriving in India in October for the fourth OECD World Forum on Statistics, Knowledge and Policy

Q. What is your view on India?
When I visit India in mid-October, I will share OECD policy recommendations for the Indian economy with key officials. A credible and coherent strategy for medium-term fiscal consolidation on the basis of an efficient tax system is an important part of the picture. But this must be developed in a way that allows for significant investment, which is required to provide much needed access to public services, such as health and education, ensure wider access to energy, as well as to develop essential infrastructure. This will require a re-prioritisation of government spending. For example, re-assessing spending on energy subsidies, which is now around three times higher than spending on health.

At the same time, India needs to think about its business environment and how to make the most of the global economy. It is important to remember that strong economic growth from business and investment will also boost government revenues that will in turn fund essential infrastructure. This means reforms to business regulation,  reducing barriers to international trade and investment, and financial sector reforms to strengthen productivity and investment.

Q. What regulatory action do you advise for India?
First of all, every country can do better in terms of regulation. We’ve been working with a host of European nations, with the United States, with Mexico, Turkey, Japan, and even with Australia, which has led the world for decades in terms of better regulation and simplification.

In India, there are three key areas where better regulation could help boost productivity and growth. First, by easing business regulation to boost entrepreneurship and dynamism, and to support job creation in the formal sector. Second, by further reducing the barriers to international trade and investment, including FDI, to boost competition and productivity. Third, by undertaking wide-ranging financial sector reforms to strengthen investment.

In particular, the willingness of foreign investors to locate in India is critical to future growth prospects. The Indian government is working hard to tackle these issues. I believe the easing of restrictions on FDI in important areas such as the retail sector would lead to significant benefits for the Indian economy. Foreign investment can help lift productivity and boost the availability of cutting-edge technology, which can also benefit Indian business. India has taken important steps to help simplify the framework for foreign investment but there’s more to be done in this area.

As in every country in the world, there is also scope for simplification. A specific regulatory issue in India concerns the relationship between the federal government, the states and then local governments. State and local governments are bound by national laws. This relationship between the three levels of government sometimes produces three times the regulation and worse still, different types of regulation, which is time-consuming and expensive. For example, it has been well documented that the Indian central government and some state governments have achieved greater economic performance through enhancing the regulatory frameworks for a better environment for businesses. These efforts encourage investment, make it easier to start up a business, and to conduct business more generally. However, this has not happened in a concerted manner across different states or in a co-ordinated way. Tackling this issue head-on through a ‘whole of government’ approach will vastly improve the consistency and quality of the regulatory environment in India.

We can share with the Indians the successful experiences as well as some of the not so successful experiences from elsewhere so that they can save some time, effort and money. For example, in Mexico, the office of the controller working together with the OECD has done away with 12,000 norms, rules, codes, regulations, laws. Little steps, big steps, hard steps, but they have dramatically streamlined things.

Q. How do you think the new regime in France will address the euro zone crisis?
I met President Hollande before summer and we agreed on the challenges to tackle the debt crisis, but, more importantly, on the policy priority to restore growth, competitiveness and jobs in many European countries and in the area as a whole. We also share an understanding of tackling the social aspects of the crisis by creating more and better jobs, by investing in people’s skills and education and by organising support for the most vulnerable. These are areas that we believe are crucial to addressing the root cause of the crisis. We are now working closely with President Hollande and his team to support the reform agenda in France. But all European economies have work to do to address rigidities in their economies. That is why we have also been working with countries like Italy and Spain on their structural reform programmes and I am glad to see that they have already made significant progress.

Q. What needs to be done as far as the euro zone is concerned?
We need a comprehensive solution to the euro zone crisis. The external commercial borrowing (ECB) strategy to fight the crisis by all means, and its recent announcement to be ready to buy bonds of debt burdened euro zone members to help reduce their borrowing costs, is to be welcomed, and constitutes a necessary step towards lasting crisis resolution. You need to show the markets that you have enough firepower to fight the crisis, and you are ready to use it.

However, there remains significant work to be done. This includes strengthening of euro zone banks and creation of a banking union, continued fiscal consolidation, and appropriate wage and price adjustments to restore competitiveness and balance between euro zone members. But, in the medium- to long-term, the most important thing is that euro zone countries embark upon a programme of structural and social reforms to help restore competitiveness and balance among themselves, and to strengthen growth across the euro zone.

Q. What is your assessment of the relationship between the euro zone and India?
One cannot deny that part of this slowdown in India’s growth is attributable to the situation in Europe. But India also has some of its own homework to do and the OECD is ready to support the policy reform agenda in India with its expertise of 50 years of better policies for better lives for countries at different stages of development.

Q. How is the banking model going to be renewed and resurrected?
In the near-term, one of the more obvious questions is the funding of the day-to-day operations. There, particularly in Europe, the ECB has proved a game changer, providing liquidity that has stabilised the inter-bank market. There was a crisis looming, with the funding, and they addressed it. However, it should not be that you need the ECB to inject such huge sums, because markets should be working normally and banks should be lending to each other. But the problem today is that banks are not doing that because they don’t have much confidence in the system and are being prudent. That is why resolving the euro zone crisis and restoring trust and confidence is so important.

But while current vulnerabilities call for central banks to continue to provide liquidity, a more fundamental process of reform of the global banking system remains imperative. Key to restoring confidence is the issue of bank capitalisation. In Europe, solvency fears for banks and their sovereigns are feeding on each other due to government guarantees for banks and banks holding government bonds.

The OECD continues to emphasise the urgency of improving the equity capital positions of banks, particularly in Europe. Some banks are raising capital themselves in the markets, some are asking their governments to produce capital, even if it is temporarily, and others are asking European institutions to provide a facility.

More broadly, the OECD is calling for the separation of traditional and investment banking activities. Separation of well-capitalised, well-governed and deposit-insured banks from investment banking will improve the appropriate pricing of risk by reducing the cross-subsidisation and ‘too-big-to-fail’ guarantees, while also helping to cushion domestic growth and jobs from bouts of extreme global market volatility.

Regulators need to be empowered and equipped to regulate and supervise the Systemically Important Financial Institutions, the very large financial institutions that were at the epicentre of the financial crisis. Appropriate regulation is essential for strengthening the system and preventing abuse that creates vulnerabilities.