Men from Mars, Women from Venus, and Veet?

Reckitt Benckiser rolls out hair removal cream for men under Veet brand, a name more popular among women. Can V mean the same to 'W' and 'M'? 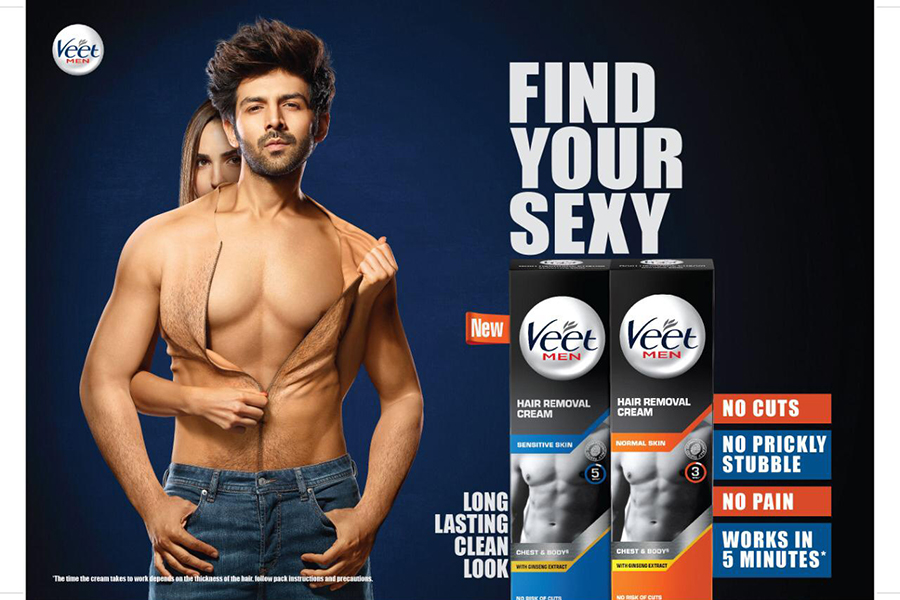 Let’s start with the hashtag (and tagline) for the new hair removal cream for men from Reckitt Benckiser’s Veet: #FindYourSexy. Cool name. Yes? Has a swag? Definitely. But does it remind you of something else? YES. #FindYourSexy is too close to Sada Sexy Raho (stay sexy forever), a tagline used by Set Wet, Marico’s men’s grooming brand.

Now, let’s come to the product: Hair removal cream for men. It’s a bold move by Reckitt Benckiser to talk of something nobody talks about openly: Hair removal cream by men, for men. “To be the first one to talk about something that nobody is talking about is courageous,” says Jagdeep Kapoor, managing director at Samsika Marketing Consultants. “They were smart enough, and quick enough, to occupy the space.”

Men using hair removal cream is something similar to what HUL discovered with its Fair & Lovely (now Glow & Lovely, and Glow & Handsome) fairness cream for women rolled out in 1975. Over the next decade or so, HUL realised that over 30 percent of users of women’s fairness cream were men. Yes, men wanted to look fair, and white. The solution devised by HUL was simple: Fair & Lovely for men. The launch, though, gave enough ammunition to rivals to take a dig at men using ‘ladkiyon waali’ fairness cream. Enter Emami with Fair And Handsome, and men got their own version of fairness cream—a cream which was not seen to be used or shared by women.

Fair And Handsome clearly established, and drove home one point: Men are from Mars, and women are from Venus. You can’t have one product under the same brand catering to both the sexes. It has to be a different soap for men and women; distinct shampoo for men and women; separate deo for both the sexes; and even talc. (Remember Wildstone TV commercial? Aapko mardangi ka vaasta) and so on. For marketers, it was blasphemous to break the rule.

Cut to 2020. A pandemic year, and a year that gives the licence to break rules. At least, this is what some companies, including Reckitt Benckiser, would have thought when it rolled out Veet Men hair removal cream. The brand roped in Bollywood actor Kartik Aaryan as its face. The product proposition was simple. ‘It just takes five minutes to work, and gives a long-lasting clean look with no risk of cuts or prickly stubble growing back’ claims the commercial.

"Today’s modern men realise the importance of grooming and won’t shy away from going the extra mile to put their best foot forward,” contends Pankaj Duhan, chief marketing officer of RB Health South Asia, in a media release. Increasing number of men, he adds, want to remove body hair for a clean and smooth look. The brand flashed an interesting insight from an independent study done by InMobi. Sixty percent of young women aged between 18 and 24 prefer to be with a man who removes body hair. Other slice from reports were: 87 percent women think it is important for men to take care of their grooming and appearance; and 74 percent of young women (between 18 and 24) agreed that men with excessive body hair look unattractive.

Brand and marketing experts find the logic amusing. The findings talk about what young women want. But does it also find out if the so-called young women would want their men to share the same brand? “It’s not a Colgate that a boyfriend and girlfriend can use from the same one,” says KV Sridhar, advertising veteran, entrepreneur, and global chief creative officer at Nihilent-Hypercollective. “A girl’s cream and a boy’s cream can’t be under the same brand name.” Take, for instance, beauty soap Lux. A soap brand which was synonymous with women tried to widen its appeal by roping in actor Shah Rukh Khan. The move bombed.

The basic thing in branding, point out analysts, is one word: Relevance. What is relevant for a woman and for a man can be more or less the same product but under different names. “If segments are distinct, target groups are distinct, then brand identity also has to be distinct,” says Kapoor of Samsika Marketing Consultants. “The thumb rule is a separate entity and separate brand identity,” he says. If you change the rule, you break the thumb. Another thing for brands to remember is never occupy or claim a positioning, which has already been occupied. ‘Sexy’ for men is Set Wet. It can’t be Veet. Use of a former’s positioning only reinforces the might of the original brand. “It has to be Mars, Venus and separate identities,” he smiles.

Tweets by @forbes_india
Teenpreneurs: These 20-year-olds are using smart tech to save small birds and marine life
The power of superstar firms amid the pandemic: Should regulators intervene?