Raghuram Rajan also indicates that there are clear risks to inflation 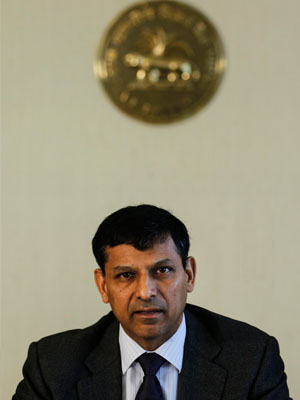 Reserve Bank of India (RBI) governor Raghuram Rajan kept interest rates on hold–as widely predicted–at eight percent in the latest monetary policy on Tuesday, but indicated that there were clear risks to inflation.

India’s annual inflation fell to a near five-year low of 3.74 percent in August, but the consumer price index (CPI)–the benchmark index for the RBI–was at 7.80 percent in August. The bank was targeting CPI to fall to six percent by January 2016, but said it could be difficult.

“With international crude prices softening and relative stability in the foreign exchange market, some upside risks to inflation are receding. Yet, there are risks from food price shocks as the full effects of the monsoon’s passage unfold, and from geo-political developments that could materialise rapidly,” the RBI governor said in his statement, issued on the bank’s website.

India, whose crop output is largely dependent on the Southwest monsoon and irrigation facilities, witnessed delayed rains this year, which impacted sowing.

The bank governor said: On the medium-term objective (inflation of six percent by January 2016), the balance of risks is still to the upside, though somewhat lower than in the last policy statement. “This continues to warrant policy preparedness to contain pressures if the risks materialise,” he said.

“The RBI governor is trying to distance himself from taking an extreme position (on announcing future rate action),” Barclays chief India economist Siddhartha Sanyal said. But Sanyal expects the RBI to lower interest rates by up to 50 basis points by the first half of 2015, once inflation dips a bit more.

Dr Devendra Pant, chief economist with India Ratings, a Fitch group firm, expects the bank to lower rates by 25 basis points sometime around the first half of next year.

Both economists downplayed the risks of a hike in interest rates next year, once growth starts to pick up. “We expect growth to pick up next year, but it will not be enough to fuel sharp inflation and a hike in rates,” Pant said.

The RBI projected growth for 2014-15 at 5.5 percent. The bank also kept both the statutory liquidity ratio (SLR) and the cash reserve ratio (CRR) unchanged.

Deutsche Bank, in a September research report, had said that the dial is turning from vicious to virtuous. It said that declining crude oil and coal prices coupled with a dip in demand for gold would result in “multi-layered benefits for the Indian economy, its external accounts, capital markets and savings profiles,” according to its analysts Abhay Laijawala and Abhishek Saraf.

The fall in global oil and coal prices will be a huge positive for India, they had said in the report. Energy imports constitute about 33 percent of India’s total imports.