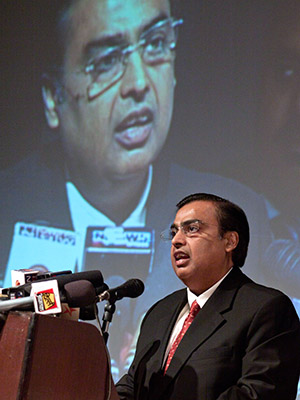 Image: Getty Images
Earlier this year, RIL participated in a government auction to secure additional spectrum and spent Rs 11,000 crore for airwaves in the 800 MHz and 1800 MHz bands in 13 circles across India

If there is one thing that makes Reliance Industries Ltd’s (RIL’s) 2014-15 annual report stand out from its predecessors, it is the detail in which developments with respect to the group’s upcoming telecom business have been described.

This is a clear indication that the oil-to-yarn and retail conglomerate is close to launching telephony services. Investors and analysts are expecting further details regarding the timelines of the exact launch and rollout road map to emerge from chairman Mukesh Ambani’s speech during RIL’s annual general meeting scheduled to be held on June 12.

RIL has emerged as the largest holder of spectrum in India, a feat that will allow the conglomerate to launch its much-anticipated telephony and digital broadband services on an unprecedented scale.

Reliance Jio Infocomm Ltd (RJIL), RIL’s wholly owned telecom arm, is yet to launch the services though it first acquired broadband wireless spectrum five years ago. The company is, however, in the last lap of making the necessary preparations to roll out services that will range from voice calling to broadband internet and a diversified library of content and digital services across verticals, including health care, financial services and education.

Some analysts expect RJIL to launch the services by mid-July, though the company hasn’t given any timeline for the launch of operations.

“Our efforts to provide 4G (fourth generation) services across the country is gathering momentum,” RIL’s chairman Mukesh Ambani said in his letter to shareholders, which was part of the company’s 2014-15 annual report. “During the year, based on our acquisition of additional spectrum, we have emerged as the largest holder of liberalised spectrum in India. This will truly be a transformational initiative that will once again validate Reliance’s ability to conceive and execute large projects across the country.”

In June 2010, RIL acquired Infotel Broadband Services, a company that had won broadband wireless spectrum in the 2300 MHz band across all 22 telecom circles in the country, thereby announcing its re-entry into the telecom space. RIL’s earlier telecom venture, Reliance Infocomm, had revolutionised the telecom market by making phone calls cheaper than postcards. But Ambani had to give up that business in favour of his younger brother Anil during a separation of business interests. The company was later rechristened Reliance Communications Ltd.

Earlier this year, RIL once again shook up the telecom market by participating in a government auction to secure additional spectrum and ended up spending around Rs 11,000 crore for airwaves in the 800 MHz and 1800 MHz bands in 13 circles across India.

“RJIL’s total equivalent spectrum footprint has increased from 597.6 MHz to 751.1 MHz (including uplink and downlink), strengthening its position as the largest holder of liberalised spectrum,” the company’s 2014-15 annual report said. Liberalised spectrum refers to airwaves that can use any telecom technology available without having to seek fresh permission from the government.

RIL’s latest annual report also indicates that RJIL will initially offer access to 22 million mobile phone numbers in the country. The company has announced that it will be spending around Rs 70,000 crore to launch telecom services. RJIL is also rolling out its physical infrastructure in 880 cities and towns across India.