Non-performing assets fall by close to 8 percent, although analysts say they remain high 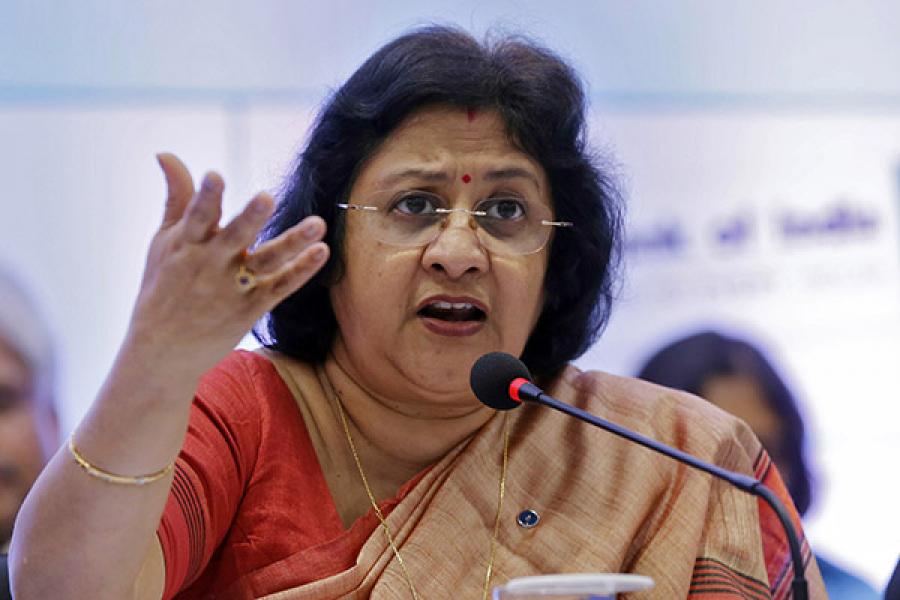 Image: Shailesh Andrade/Reuters
SBI chairman Arundhati Bhattacharya
State Bank of India (SBI), the country’s largest lender, reported a better-than-expected 23 percent jump in net profit for the three months ended March. Its improved asset quality pushed up share prices briefly.
SBI reported a net profit of Rs 3,742 crore in the January to March quarter, up 23.06 percent over the previous year’s Rs 3,041 crore for the same period. Analysts had widely expected SBI to post a profit of Rs 3,720 crore for the quarter.
Importantly, the bank also showed a decline of close to 8 percent in gross non-performing assets (NPA) to Rs 56,725 crore in the financial year ended March 2015, from Rs 61,605 crore for the year ended March 2014. The bank’s gross NPA ratio declined by 70 basis points year-to-year and is at 4.25 percent while the net NPA ratio improved from 2.57 to 2.12 percent.
“All the key earnings numbers have been positive,” said Santosh Singh, banking analyst at Societe Generale. “The SBI management has been focusing on recoveries,” said Vaibhav Agrawal, banking analyst with Angel Broking, adding that recent quarters showed a steady improvement in asset quality and claims for the bank. “SBI’s processes are stronger than those of other public sector banks.” He, however, said that though bad loans have been falling, in absolute terms “they are still high”, and recoveries needed to improve a lot more.
After announcement of its quarterly earnings, SBI’s stock price rose to a day’s high of Rs 305, up 5.4 percent over its previous close at the Bombay Stock Exchange. It, however, slipped to Rs 282.45 in late afternoon trade, down 2.36 percent, on profit taking.
SBI chairman Arundhati Bhattacharya has been aggressively focusing on steps to reduce bad loan levels, boost profitability and use technology platforms to raise income and expand its reach. This week, the bank signed two important deals: One with Amazon, to facilitate payment and commerce solutions for its customers and small businesses; and the other with payment gateway PayPal, to facilitate cross-border transactions.
While financials for the bank are on the mend, analysts said it was critical that growth levels—through the loan book—improved for SBI. For several quarters, Indian banks have been weighed down by worries of rising bad loans and sluggish economic growth. SBI reported a 7.25 percent rise in total loans for the year, against the sector's loan growth of 12.6 percent, analysts said. Bhattacharya has said earlier that she expects credit growth for the bank to accelerate from the low levels of just under 10 percent to over 15 percent in the new financial year.
While the Reserve Bank of India is expected to cut interest rates at the next policy meeting on June 2, the progress of this year’s monsoon, and pick up in rural demand and spending, will determine future trends in monetary policy.