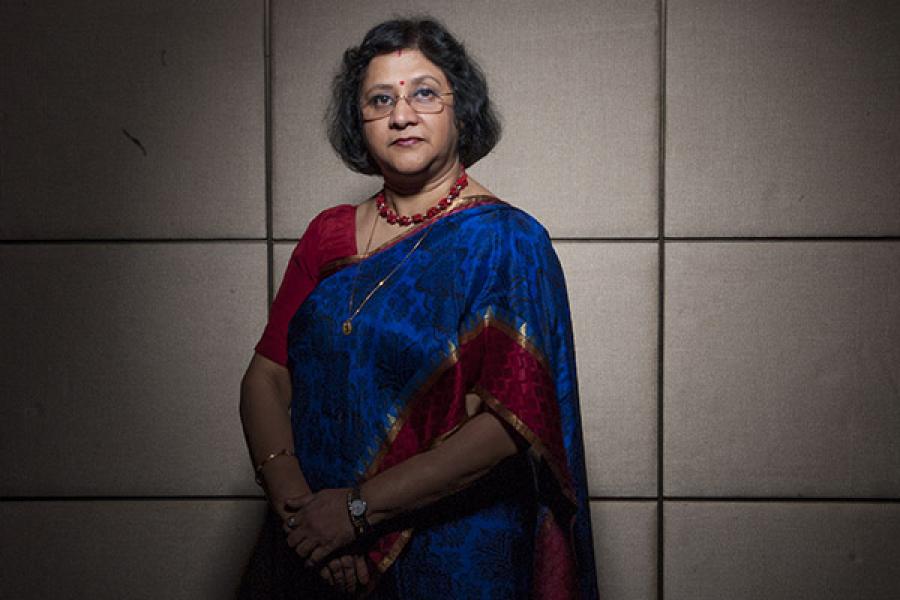 State Bank of India (SBI), the country’s largest lender which figures at rank 152 on the Forbes Global 2000 list of the world’s biggest and best companies, will begin discussions with the government on additional capital after it declares its results on May 22. Alongside, the bank has decided to undertake a serious digital push as it seeks to increase income.

In an exclusive interview with Forbes India, SBI chairman Arundhati Bhattacharya said the discussions on how much the government would pump in as capital into the bank would begin shortly, immediately after the results were declared. SBI will make a detailed presentation to the government and make its case for additional capital to meet business needs.

“This year the government has said they would like us to make presentations, like we do to any of the investors, about why we need capital. We should be able to press our case accordingly,” said Bhattacharya. The bank, which clocked a 30 percent increase in net profits in the third quarter and managed to arrest the increase in bad loans, will declare its annual results in Kolkata on Friday (May 22). As of December 31, 2014, the bank’s tier I capital adequacy ratio stood at 10.01 percent and overall capital adequacy at 12.66 percent under Basel III norms.

SBI has already secured board permission for raising Rs 15,000 crore from the markets, but has a year’s window to actually do so. The government, as part of a move to recapitalize state-owned banks, had pumped in Rs 6,990 crore in all into such banks in FY15, with SBI getting Rs 2,970 crore. For FY16, the Union Budget has earmarked Rs 7,940 crore into state-owned banks, a signal that it prefers the banks to go to the markets for capital. SBI will, therefore, have to make its own pitch for additional capital from the government. “We will make a presentation about our business plans, where we see our business plans going forward and why we need capital,” Bhattacharya said. The government currently holds 58.6 percent stake in the bank.

Digital and retail
Bhattacharya said while the “low-hanging fruit” in terms of costs had been addressed, further reductions in the cost-income ratio would need “other very deep measures.” At the end of the third quarter (December 2014), the bank’s expenses ratio fell to 51 percent, down 432 points from the year-ago period. SBI has just signed two important deals – one with Amazon and the other with PayPal. The Amazon deal is to facilitate payment and commerce solutions for its customers and small businesses, while the PayPal deal is for facilitating cross-border transactions.

Bhattacharya said the bank was very serious about its digital journey as a way forward for reaching more customers and increasing income. “We’ve just started this with the opening of the InTouch branches but that is just the first step. We are very serious about digital and more things will happen at quick intervals. We will be able to add on customers and go much beyond brick and mortar. We will also add to income,” she said, adding: “I can do only so much on the cost front, but I can do more on income.”

In a report on SBI following its third quarter results, JP Morgan said in a report: “Management continues to leverage technology to improve not just costs but also affect the quality of business.”

Bhattacharya said SBI was changing the way it did business in retail, and was stressing on the franchisee model. She said the bank had major plans around training business correspondents (BCs) for the purpose. “This is important because if a person wants money, he should not walk 3 km to a branch. Therefore, we have to see how many we can make into BCs, enable easier cash-outs and card-to-card transfers. If the neighbourhood grocer has an account and the customer has a card, why go through cash? We want to bring down the cash intensity in the economy and give as many cash-out points close at hand to ensure greater financial inclusion,” she said.

Rural demand
She said the direct benefit transfer (DBT) initiative of the economy would go a long way in benefiting the rural economy. “Not everybody needs subsidy in an item. I may need the cash for something else. If you put cash in the hands of recipient they may use it for nutrition, medication, education of children… they [the recipients] are the best judge. They may use it better instead of giving it for sugar, kerosene or rice. Aadhaar and subsidies through bank accounts will also plug leakages.”

In the context of the rural economy, Bhattacharya said that she believed more on the quality not on the quantity of the monsoon.“The critical things are timeliness and spread. Then even a 93% monsoon is fine. If it progresses well and is widely distributed, things should look good again.”

“The government has reiterated they will look at rural countryside to see there is enough asset creation there. You need to bring about rural demand in a sustainable manner. Give them better roads, irrigation, power, and have them sell at the best prices. Unless all these things happen, rural economy will be under stress. We need sustainable initiatives, not stop-gap measures. Nothing can be sustainable unless there is capital formation in the rural areas,” she added.

Interest rate outlook
Saddled with Rs 36,000 crore by way of excess SLR in the wake of flagging demand for credit, does SBI believe deposit rates will need to be reduced? “Deposit rates will head down. Already base rates have started coming down, and the downward journey will continue,” Bhattacharya pointed out. “Inflation numbers are way below 6 percent and I don’t see anything other than an easing cycle.
Commenting on Reserve Bank of India (RBI) governor Raghuram Rajan’s recent comment that the notion that banks’ cost of funds had not fallen was “nonsense” and the move by some banks including SBI to reduce rates thereafter, Bhattacharya said: “Rates came down not because of what the governor said. They came down because they were supposed to come down. We wanted to check what the RBI had to say before deciding on our rates. We wanted that the main event [the policy statement] should be behind us. Rates are very much a function of the cost of funds.”

On credit growth, she said it appears weak because much of short term borrowings had gone to the commercial paper (CP) market. “You add that [the money which has gone into CPs] back to credit growth and you will find the numbers aren’t very different. People have written off, sold to ARCs, cleaned up balance sheets. These are years of consolidation and it will happen that way.”
She said while there were several steps being taken by the government to ease the worries in the problem sectors of the economy, the segments which still need handholding are power, construction and mining. “The mines are starting to open. But we need to see all the mines open and working.”

(The full interview with SBI chairman Arundhati Bhattacharya appears in the forthcoming issue of Forbes India, which hits the stands on May 29)

Tweets by @forbesindia
Is living on your list?
Reliance Jio to begin services with 22 million mobile phone numbers