Bucket lists may be fashionable but the only 'must-do' that matters is giving real passion expression, without fear or diffidence. Take Farhan Akhtar and his pursuit of happiness

I find the notion of a bucket list morbid. After all, it is a list of things to do before you die. Die. Why would anyone want to underscore their mortality? There’s also too much pressure to include cool aspirations—swimming with sharks, for instance—as opposed to genuine ones. And, finally, it is just one more reminder of regret: ‘Oh, damn, I am about to die and I still haven’t ticked item numbers 4-30 off the list’. You don’t want that thought hanging over your deathbed. 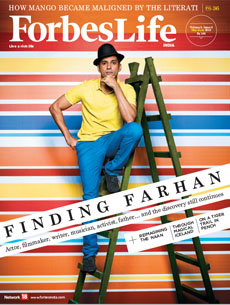 I am being facetious, though. No one’s waving around a piece of paper or making notes with a pencil. Most people evolve their ‘lists’ as they go along—and often post-facto. ‘Finally seen the Northern Lights. Strike that off my list’. Or, ‘Ate at Heston Blumenthal’s. Check’. These are mostly breezy Facebook updates, an innocuous totting up of pleasures that add up to a life enjoyed.
But they are rarely life-altering. For that, there’s another kind of a list. Of things that lead to a life lived. The postponement or abandonment of this list can leave a hole in your heart. Think of the investment banker who didn’t take that summer creative writing workshop because, he thought, what was the point? Or the mother of two who put off her Hindustani classical music lessons till it was “too late”. Or the production designer who was too scared to let his theatre group know he wanted to be centre stage—just once. What would they say, he feared. He never found out because he never asked. Here’s the thing: There is always a point and it is never too late. And, really, what is the worst thing people can say?

On the other hand, the upside is the joy of giving your passion expression. This may not lead to a multi-book deal or sold-out concerts or leading acts, but it will ensure a life of little regret. Now, meet the enemy. Diffidence is a quiet menace. It creeps in when you least want it. It creates self-doubt and paralyses any sense of adventure. To fight it, I often take inspiration from those who’ve squashed it to a pulp and are truly happy for it. Take Farhan Akhtar, our cover man. A consummate multi-hyphenate, he acts, directs, produces, parents, sings, speaks up for causes, and skydives when he can. Not that he is applauded for all of it. But as Akhtar tells ForbesLife India, “You have to base those [creative] decisions on what you think is right for you in that moment. You want to do something that will bring you some joy—some learnings and experiences that will enrich you.” Preoccupation with external validation is the biggest roadblock, and he tries not to let it come in his way, he says in a conversation with Karishma Upadhyay.

Neither should authors who want to continue to manifest India in mangoes and saris.  A significant part of the literary world is now openly scornful about “the kind of novel that trades in the Great Indian clichés of spices, saris, arranged marriages, monsoon, tigers and, most egregious of all, mangoes,” writes Nina Martyris in a piece that explains this aversion but also wonders whether the omission of those tropes is, in some cases, merely fashionable.

This may make ‘Write a Novel’ a little more difficult to accomplish but for chronic listers we offer a simpler selection of other must-dos.
‘Drive through Iceland.’
‘Tango like the Argentines.’
And, of course, ‘Read ForbesLife India!’ Best,
Abhilasha Khaitan
Editor, ForbesLife India
Email: abhilasha.khaitan@network18online.com
Twitter id: @abbykhaitan

(This story appears in the May-June 2015 issue of ForbesLife India. You can buy our tablet version from Magzter.com. To visit our Archives, click here.)