The merger involves integrating the role and services of 70,000 staff and 7,000 branches; analysts say the process could take up to three years to complete 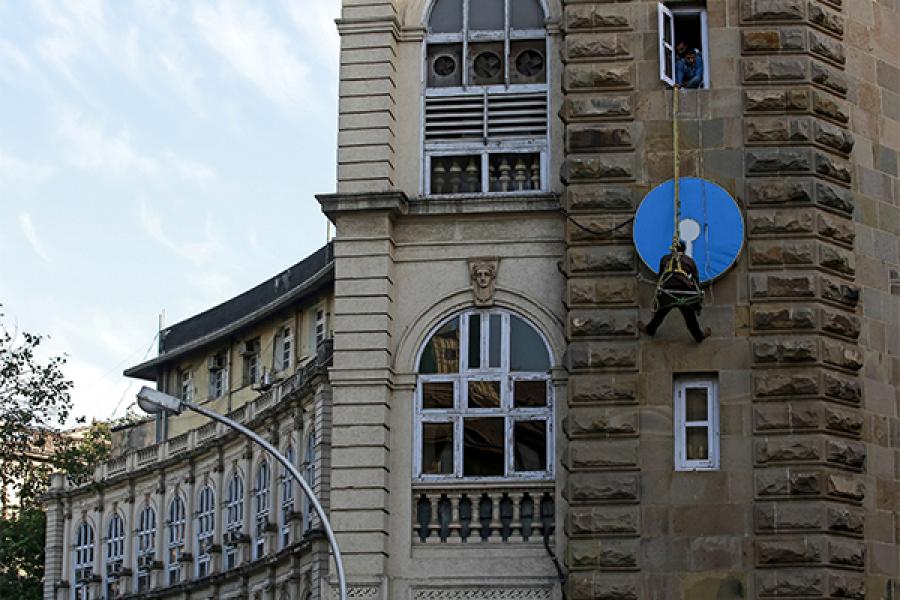 What does a bank merger, which has been in discussion for over a decade, mean for the banks in focus and the overall banking system? The amalgamation of five associate banks of the State Bank of India (SBI) with the parent is the biggest merger in recent times. It will make SBI—already the country’s largest commercial lender by assets and deposits—even larger.

The move comes at a time when SBI—like several other state-run banks—is struggling to cope with rising bad loans. Its net profit for the three months ended March 31, 2016 slumped 66 percent from the year-ago period, due to higher provisioning for bad loans.

Three of the associate banks, SBBJ, SBT and SBM, are listed on the stock exchanges and investors have cheered the merger move. Stocks of the associate banks moved up sharply when the cabinet clearance for the move came on June 15, but have retraced since then, partly due to profit booking and also due to fears of a British exit from the European Union.

SBT stock is up 1.3 percent, SBM up 12.12 percent and SBJJ up 2.4 percent since the merger was approved by the cabinet. SBI’s stock, on the other hand, has shed 1.2 percent in the period.

There are some very clear long-term benefits from the merger, but it will come with short-term pain. Cost savings will come from common treasury operations and audits. Branch rationalisation will also be a medium- to long-term benefit. But there will be tricky issues which SBI and the government will have to face, relating to integration of manpower, restructuring job profiles and remuneration to staff.

Some analysts Forbes India spoke to say the merger could be complete in about three years time.
Investors will watch for the share-swap ratio and what SBI will have to pay to buy out the remaining stake in the associate banks. These details will emerge in about three weeks. 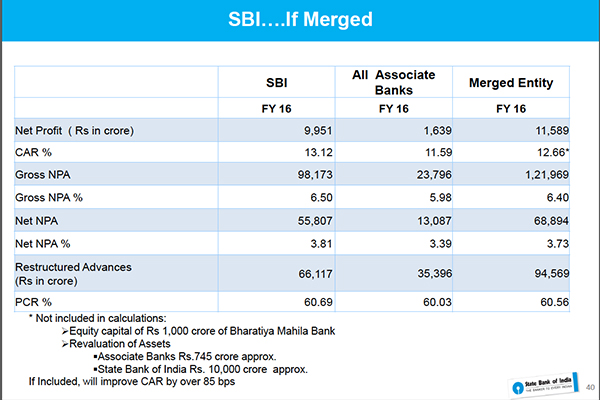 SBI’s associate banks largely operate as independent banks, but considering that SBI already owns between 75 and 90 percent in these five banks, there are inefficiencies and overlap of operations, which could lessen with the merger.

The last merger in the SBI group was a small one: Two branches of the State Bank of India Commercial and International Bank Ltd (SBICI) merged with the parent in 2011. Prior to this, in 2010, was the much larger merger of State Bank of Indore’s 470 branches with SBI. The latest merger involves integrating the role and services of 70,000 people and about 7,000 branches.

“We would be sceptical about SBI’s ability to rationalise branch network or employee base immediately given the unionised structure of the employees. On the flip side, SBI’s cost per employee is significantly higher than its subsidiaries and we would expect an increase in employee cost post merger as all the employees would likely push for [pay] parity,” Santosh Singh and Manjith Nair of Haitong Securities said in a May note to clients, prior to the merger approval.

Some employee unions of the associate banks last week opposed the merger decision and strikes are planned for July this year.

But the rumbling by unions does not diminish the need to merge. “There was no best time to merge. SBI anyway runs these banks, it makes sense [to merge],” says Singh, who is head of research at Haitong Securities in India. SBI is a preferred bank amongst the basket of state-owned banks, for Haitong Securities.

Saswata Guha, director of financial institutions at Fitch Ratings in Mumbai believes that “post merger, SBI’s standalone balance sheet will look like an [earlier] consolidated balance sheet. The associate banks will get a larger canvas to play around with.” “It is like inducting your children into your own house,” he says.

“The merger of SBI and its associate banks is a win-win for both. While the network of SBI would stand to increase, its reach would multiply,” SBI chairman Arundhati Bhattacharya had said earlier in a statement. “One can expect efficiencies to be created from rationalisation of branches, common treasury pooling and proper deployment of a large skilled resource base.” She also said that post merger; the cost-to-income ratio (a company’s cost of operations in relation to its income) will come down by 100 basis points in a year.

The merger will obviously create a banking behemoth. Post merger, SBI’s balance sheet will grow to Rs 37 lakh crore from a standalone Rs 27 lakh crore, according to data from SBI. It would also push SBI into the top 50 banks in the world (by asset size). At present, no Indian bank features in this list.

Post merger, SBI would have aggregate deposits of over Rs 21 lakh crore, advances of Rs 18 lakh crore and a combined net profit of Rs 11,589 crore.

How does capital adequacy and asset quality of the associate banks and the parent match up? What will the merged entity look like? According to Dhananjay Sinha, head of institutional research, economist and strategist with Emkay Global Financial Services, at this stage, the associated banks have a better capital adequacy and non-performing assets (NPA) levels. “The merged entity will look somewhat better,” says Sinha.

“Integration of 70,000 employees [34 percent of the parent workforce; size of business is 25 percent of the parent’s] will be a key challenge,” an Emkay note to clients says. But even while the long-term synergy benefits outweigh near-term challenges, Emkay has kept SBI’s target price of Rs 220 unchanged as earlier, because they valued the bank on a consolidated basis.

From a valuation perspective, the associate banks stand to gain, based on current trading multiples. The associated banks are trading at 0.6x their price-to-book value, compared to 0.9x for SBI, analysts said.

SBI insiders are confident that the parent will gain strength from the merger. “All the stakeholders will benefit. If they were to continue to operate on their own, they would find it difficult to invest in technology,” says Neeraj Vyas, deputy managing director, SBI, who is in charge of associates and subsidiaries.

The merger process relating to manpower will be trickier, involving integrating different formulas for pension, superannuation and gratuity, into one system.
“Retrenchment will be there, it is more like trimming the excess flab off,” Vyas says.

Integration of some technology processes, such as SBI InTouch could come with a time lag for the associate branches.

Government and regulatory (Reserve Bank of India) approvals will be required as the merger process gathers shape and is finalised. The true proof of the pudding would be when SBI can truly manage to reduce costs and boost employee efficiency across branches, while expanding digitally. As the government and the regulator push for further consolidation in the banking system, what the country could do with most at this stage is fewer but well-managed banks.