Marriages in lockdown: How Nitesh Tiwari turned into 'Frying Master Gogo,' and Ashwiny Iyer Tiwari into an accomplished chef during the work from home era, and how the couple is redefining stereotypes 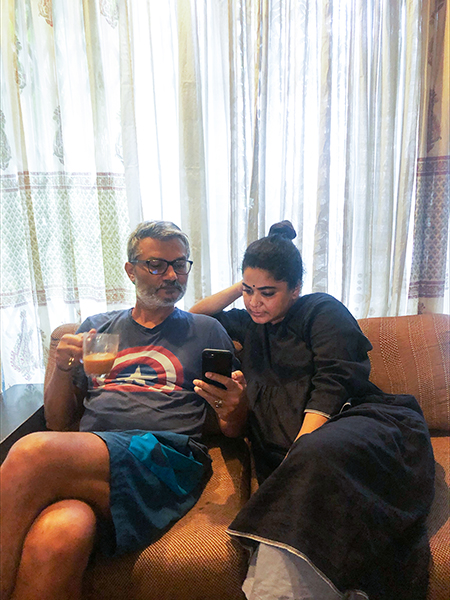 At filmmakers Nitesh Tiwari and Ashwiny Iyer Tiwari’s home, immediately after the lockdown in March, domestic help vanished, drivers disappeared and the probability of things turning chaotic for the filmmaker-couple was quite high. In fact, things looked frightening, as over the next three months, the ‘impulsive brain’ and the ‘engineering mind’ clanked countless times. Roles were not divided.  Cut to July. Blows were not exchanged, heads were not broken. The duo has survived for over 100 days in harmony. “We have not pulled each other’s hair,” grins Nitesh. “This is the maximum time we spent together in so many years. In fact, even our honeymoon was not so long,” Ashwiny laughs. The husband shares the mantra for a happy relationship: Love, care, and respect.  Ashwiny explains how household chores were managed post lockdown: in auto-pilot mode. “There were never any rules,” she says. And that has been the ground reality over the last 15 years of their marriage. No rules. “It was never about if I am doing laundry, why aren’t you doing it,” she says. Giving space to each other, she says, is crucial.  There have been days she has spent watching something or writing, with Nitesh playing games on mobile. “Then our son, inspired by his father, would join in and start playing games,” she says, adding that she even tried downloading some ‘brick’ game but didn’t find interesting.   Thanks to Ashwiny, Nitesh’s passion for games landed him in trouble at Leo Burnett, the advertising agency where he worked before taking a plunge into movie-making. “She was the reason I had to stop playing counter-strike game in the office,” he says. Ashwiny, who was his colleague there, complained about the ruckus created by Nitesh and his gang of friends. “She spoiled the entire party,” he recalls. “She was my wife and she complained,” Nitesh laughs. “That was backstabbing.”  Back home, during the lockdown, an interesting pattern emerged while taking care of kitchen. Ashwiny—the impulsive cook—took care of the ‘wholesome’ food. And Nitesh—the engineering from IIT Bombay—graduated in frying food. Impressed with his skills, Ashwiny coined a moniker—Frying Master Gogo—for her husband, inspired by the iconic Crime Master Gogo character in the 1994 movie Andaz Apna Apna.  Ashwiny unravels Nitesh’s obsession with measurement and engineering. “For cooking lentils in the cooker, he would always insist on having a fixed number of whistles,” she says. “I can’t digest such rules. I go mad,” she adds. “I add things according to taste,” she says. “Nitesh would go to the extent of explaining at what temperature anything should be fried. In fact, he graduated from sandwiches and Maggi to full-fledged chole and other dishes.”  Before the lockdown, Nitesh would make fun of Ashwiny’s ‘limited’ culinary knowledge, that their kids won’t miss much their ‘mother’s cooking’ when they go abroad for studies. “But she has surprised us, been brilliant with food,” he says, complimenting her on her attitude of learning new things and doing them to perfection.  And the learning has been real quick. From looking at Youtube regularly to see how things are cooked during the first month of lockdown to now boldly entering the kitchen and churning out experimental dishes, the enthusiasm has been infectious, he says. “The kids have put on weight, largely because they are relishing whatever she is making,” he smiles. As far as the other chores are concerned—washing clothes and cleaning—the duo follows a rotation policy. But if anyone is low on energy, the other steps in to do the job. “In fact, the kids wash their own clothes. I taught them how to operate the machine,” he says. They have also picked up additional tasks of filling bottles and operating the water pump. “We have all worked together and shared the load,” he says. “It has been a relationship of equals,” he says,  Gender equality for the duo is not confined to domestic chores. Nitesh explains. “Whenever Ashwiny is out for shoots, I take care of the kids, and vice versa,” he says. Rarely do both of them shoot at the same time. “In fact, it has happened only once,” he says. With the children, the roles are clearly laid out: Anything to do with maths and science is handled by Nitesh, and arts and literature by Ashwiny.  For Ashwiny, gender equality boils down to three things: love, care and respect. It’s never ‘versus’, but always ‘together,’ she says.  (Read more about how work from home is demolishing traditional gender roles in our next issue, which hits the stands this weekend)