Why has Australia fallen out of love with immigration?

With its largest cities struggling to manage growth and after years of anti-immigrant rhetoric from politicians, many Australians now say their country no longer needs more people

By Damien Cave and Isabella Kwai 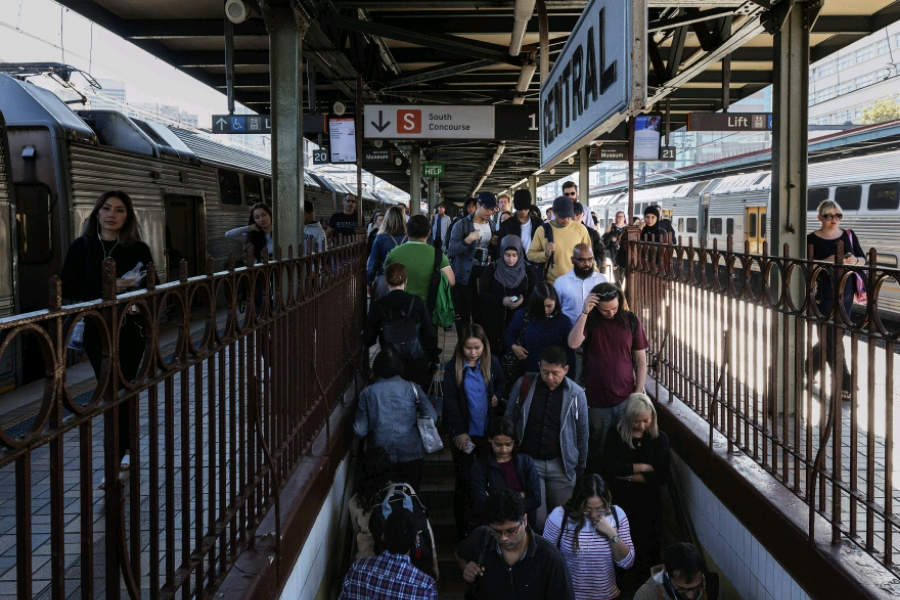 Passengers exit a train during morning commute at Central Station in Sydney, on April 15, 2019.
Image: Anna Maria Antoinette D’Addario/The New York Times
SYDNEY — Five days after 50 Muslims in New Zealand were killed in an attack attributed to an Australian white supremacist, Australia’s prime minister, Scott Morrison, unveiled a plan he said would address a fundamental challenge to the nation. But it was not a proposal to combat hate groups and Islamophobia. It was a cut to immigration. The government’s plan, which had been in the works for months, is a potential turning point for a nation that has been shaped by newcomers since its days as a British penal colony and that has presented itself in recent years as a model of how immigration, properly managed, can strengthen a country. Now, amid a global backlash against immigration that has upended politics in the United States, Britain and much of Europe, even Australia is reversing course, turning away from a policy of welcoming skilled foreigners that helped fuel decades of economic growth — and transformed a nation once closed to nonwhite immigrants into a multicultural society. Morrison presented the move as a reaction to crowding in the nation’s largest cities, which has led to congested commutes and costlier housing. “This plan is about protecting the quality of life of Australians right across our country,” he said. Such concerns are widespread as views in the country have turned sharply against population growth over the past year. There is worry, though, that these “quality-of-life” complaints have been amplified by — or perhaps have masked — a deeper ambivalence about a new wave of non-European immigration, especially from Muslim countries, along with Africa and Asia. There’s no denying the rapid pace of change, nor its benefits. Australia’s population has grown by nearly 40%, from 18 million to 25 million, since the 1990s, and economists argue that the nation’s record-breaking 27 years without a recession would have been impossible if not for surging immigration. 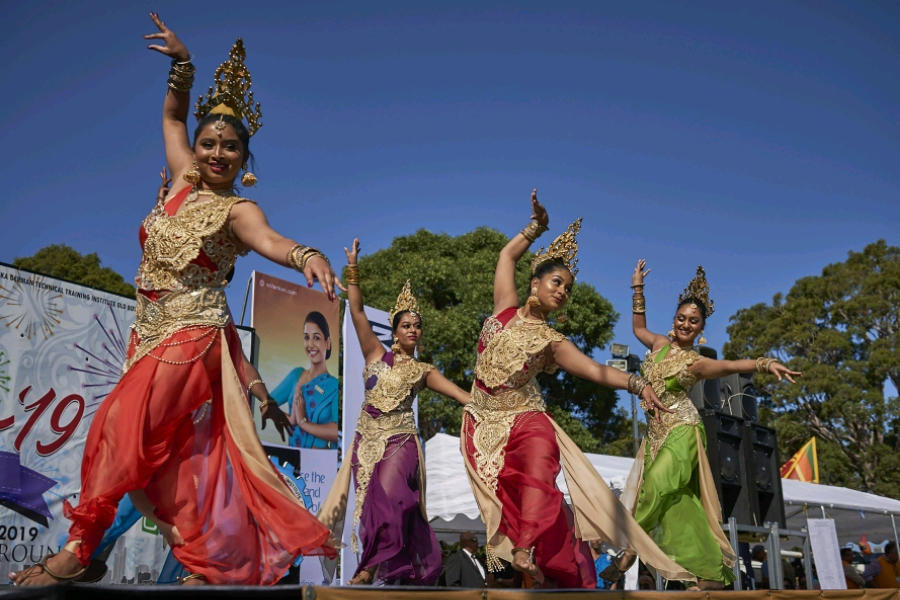 Performers at the Sri Lankan Sinhala New Year Festival in Melbourne, Australia, on April 7, 2019. Image: Christina Simons/The New York Times Most of the 4.7 million foreigners who have arrived since 1980 have been skilled migrants, especially since 2004, when an average of more than 350,000 students and skilled workers arrived each year, according to government figures. According to the 2016 census, more than 1 in 4 Australians were born overseas, compared to 13.7% of the population in the United States and 14% in Britain. And six out of the top 10 source countries are now in Asia, with immigrants from China (509,558 people) and India (455,385) leading the way. Many Australians say it is time for these trends to end. In one recent poll, more than two-thirds said their country no longer needed more people. As recently as 2010, a majority of Australians disagreed with that statement. Morrison and his Liberal Party — which has often used anti-immigrant sentiment to stir its conservative base — clearly believe that immigration will be a winning issue for them in the national election May 18. The government has slowed visa approvals, and plans to cut annual immigration by 30,000 people to 160,000 a year, a reduction greater than any since the early 1980s, according to archival data. Morrison also plans to shift work visas to steer newcomers outside the big cities, requiring recipients to live in those regions for three years before they can secure permanent residency. The opposition Labor Party, meanwhile, has mostly sought to avoid the issue, mindful of how it has empowered conservatives in Britain and the United States, where President Donald Trump recently declared that the country is now “full.” Experts examining polling data and census figures have found that Australian frustration over immigration is focused around general themes: the pace of population growth (1.6% nationwide last year, compared to 0.7% for the United States) and perceptions around who wins and loses because of it. With a landmass as big as the continental United States and one-tenth the population, Australia is one of the world’s most sparsely populated countries. It is also among the most urbanized, and it nurses a culture of high expectations; even many city dwellers expect a backyard. But Nicholas Biddle, an economist at the Australian National University who oversaw a major poll on immigration late last year, found that people living in the places most strained by population growth are not the ones most likely to demand curbs on immigration. When Biddle mapped, using census data, the characteristics of those who were opposed to population growth and immigration, for example, he found that none of the areas in the top 20% of opposition to population growth and immigration were in Sydney or Melbourne. Instead, based on the nationwide polling, the place where residents were least likely to be opposed to population growth was Surry Hills, an inner suburb of Sydney where housing prices have skyrocketed and traffic can be suffocating. 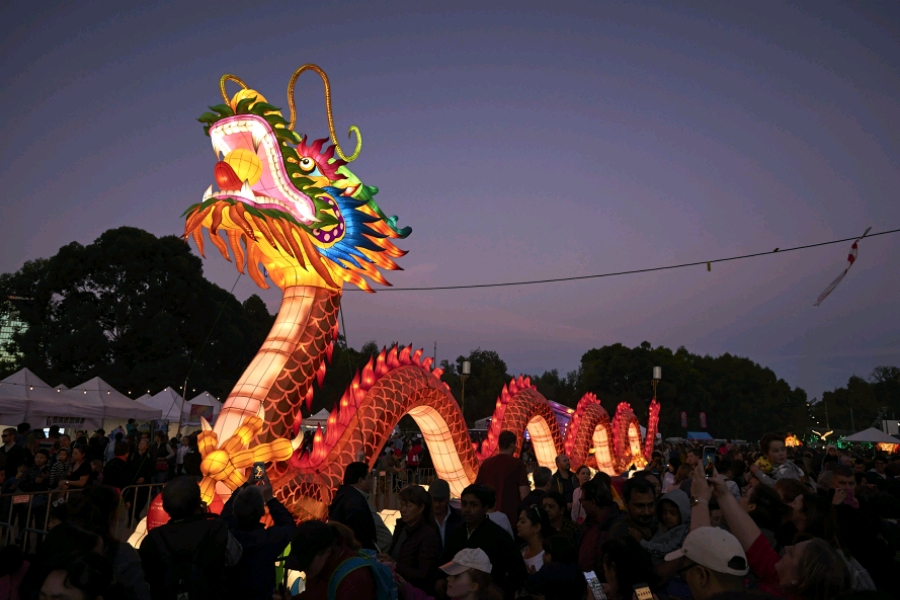 A dragon lantern at the Light Up Melbourne Festival, which showcases Asian culture and traditional Asian cuisines and entertainment, in Melbourne, Australia, on April 6, 2019.
Image: Christina Simons/The New York Times During one recent evening rush hour at Central Station, hundreds of people lined up to pile onto trains as announcements implored customers to spread out along the platform. But even some of the most frustrated commuters called not for fewer people, but for improved infrastructure, microcities outside Sydney’s center or changes in workplace culture that might limit rush-hour commuting. “I wouldn’t want to return to the Australia of the 1930s and ’40s,” said Michael Monaghan, who was holding a briefcase while waiting for a train. “It’s just a matter of managing it.” A far different sentiment can be heard about two hours north of Sydney, on the Central Coast, home to a cluster of somewhat rural suburbs and fishing towns in the top tier of opposition to growth and immigration. Some residents of the area justify their opposition by asking whether Australia has enough water to support a larger population, an element of the country’s immigration debate since the 1980s, before desalination plants became more common. But there are also people like Stephen Ryan, 69, a retired power station worker who was not shy about arguing that Australia was better off when its immigrants were mostly from England. “The Arab people, they don’t want to do anything,” he said. “They just want to go on the dole. That’s just the way I see it.” It is the kind of attitude that, according to many immigrants in Australia, still shapes the discussion around population growth in a country that barred nonwhite immigrants until 1971. The rise of right-wing politicians like Fraser Anning, a senator who blamed Muslim immigration for the New Zealand attacks, and Pauline Hanson, who once wore a burqa in Parliament to protest Islam, has pushed racism into mainstream public discussion. “In the last few years, we have seen politicians state that people had a right to be bigots,” said Tim Soutphommasane, a former race commissioner in Australia and a professor at the University of Sydney. “There’s been a creeping normalization of far-right political ideas.” On a local level, two competing visions of Australia are essentially fighting for votes: the Australia longing for a nostalgic past, and the Australia trying to figure out the next phase of integration for a more globalized nation. Young political candidates like Kadira Pethiyagoda are at the forefront of potential change. Pethiyagoda, 39, who immigrated from Sri Lanka and served as an Australian diplomat, is running for the Labor Party in Melbourne. “Services are being cut, wages haven’t gone up, the cost of living is increasing. People are being squeezed,” he said. “Politicians are pointing to all these problems, trying to pretend the cause of this is only immigration.” As he campaigned by knocking on doors, some who answered said they, too, wanted more livable cities — with a focus on how to help everyone, newcomers included. “It just makes me feel confident that maybe somebody who understands the challenges that migrant families face can actually accurately represent our views and actions,” said Yvonne Maringa, 35, an English immigrant of Zimbabwean descent. “I think there’s a limited understanding still of migrant communities and their needs.”

Tweets by @forbes_india
This Estonian startup has become a thorn in Uber's side
Who has the Ad-vantage? A tale of two celebrity couples