Can MyGate replace the calling bell? 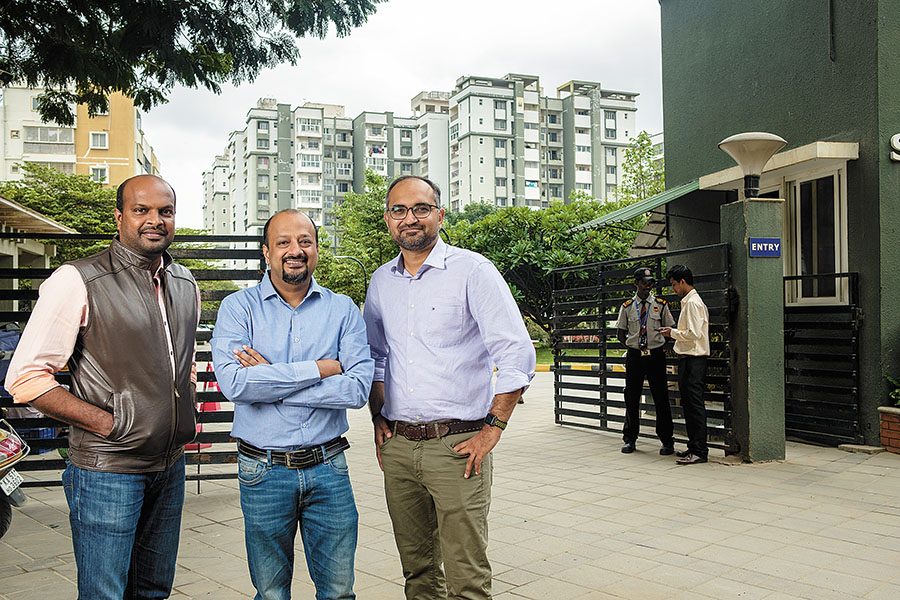 It wasn’t easy for Vijay Arisetty when he left the Indian Air Force in 2009, after serving as a helicopter pilot for 10 years. A Shaurya Chakra recipient—Arisetty had won the gallantry award for his rescue work during the 2004 tsunami—he had lived most of his life in air force stations or cantonments where entry and exit is very heavily regulated.

“The transition was much more difficult for my wife than it was for me,” says Arisetty. “When we moved to a gated community, one of the best in Bengaluru, we noticed that the security setup was so different from what it was at the cantonments. There was a lot of mismanagement and that meant a lot of room for improvement too.” Much of the mismanagement was due to the constant calls on the intercom, seeking permission for entry of visitors like domestic helps, delivery boys, and guests who were staying on for a while. “The security industry had not kept up with time and embraced technology like many other sectors,” says Arisetty. “And gated communities was a big market to tap into because when people move in there, one of the most important factors they consider is security.”

But it wasn’t until 2015 that the 41-year-old teamed up with a few friends to launch MyGate, a security management app with technology on the centerstage. The app handles everything, including communication between security guards and residents, group activities, and the entry and exit of domestic helps. Visitors, including delivery boys and taxi drivers, are allowed entry only after residents are alerted and give an approval on the app. The app also allows residents to monitor the security of their aging parents by keeping a check on visitors and documentation of local service providers who visit.

MyGate is used by more than 1 million apartments across India’s top metros, including Hyderabad, Pune, Delhi, and Mumbai, says Arisetty. The management committee of a housing society pays for an annual maintenance contract, which works out to ₹20 per flat every month. The company, based in Bengaluru, has over 600 employees, of which about 500 are into client service, considering the growing userbase.

MyGate probably wouldn’t have happened if not for an injury that Arisetty suffered during a game of basketball. His dislocated shoulder meant he would not be fit enough to fly helicopters again, forcing him to leave the armed forces. That led him to the Indian School of Business in Hyderabad, before joining Goldman Sachs in Bengaluru in 2011. “But the speed of life in the corporate sector wasn’t matching the one in the Air Force,” says Arisetty, who is now co-founder and CEO of MyGate. “I decided to leave Goldman Sachs and do something on my own.”

That was around 2015, and India was beginning to see a boom in the ecommerce sector, with online aggregators of food and grocery delivery services mushrooming. “There was a huge influx of delivery people and taxi drivers frequenting apartments,” Arisetty says.

For long, security measures at gated communities included visitors making manual entries in ledgers, with authentication being a daunting task for residents and the security guards. With gated communities growing 12 percent year-on-year, Arisetty knew it was a huge market to tap into.

He flew to New Delhi to meet Shreyans Daga, a classmate from ISB, to chart out a path for a new business venture. Along with Abhishek Kumar, a colleague from Goldman Sachs and Vivek Bharadwaj, a former fighter pilot in the Indian Air Force, Arisetty began work on MyGate. The company was bootstrapped and the team raised about ₹1.5 crore, which would see them through the development stage of 18 months. With the new app in-store, the team then approached Arisetty’s housing society in Bengaluru to test out the services. “Of course, the initial product was very different from what we offer now,” says Arisetty.

The MyGate app would provide real-time management for domestic helps, vegetable vendors and milkmen, provide instant alerts regarding security and other issues, and automate guest authentication and entry through digital validation of staff and residents.

“This app has made it so much easier for security guards at gated communities,” says Kunwar Vikram Singh, chairman of the Central Association of Private Security Industry, an industry body. “Of course it is yet to find a space in the larger townships. But with technology taking over our lives, it has become a good tool for security guards, who are also becoming tech-savvy.”

MyGate added about 10 new gated communities per month in 2017, its launch year, which increased to 200 every month in 2018, and 800per month so far in 2019; they are aiming to add 4,000 new gated communities per month by next March. Along the way, the company also raised more than $11 million (about ₹73 crore) from Prime Venture Partners, which led two investment rounds in the company last year.

MyGate isn’t the only app in India to focus on apartment management. Others such as Adda Security, ApnaComplex and Biizlo also offer similar solutions, with Bizzlo recently raising ₹3.5 crore from Eagle Group, a security and personnel services provider. Arisetty says that many of the other apps are simply copycats, and don’t have the requisite backend technology to meet requirements.

“We have trained over 1.5 lakh security guards, since they are the biggest and strongest link,” he says. “That number itself is more than the number of users the other apps serve. Many people believe this service is easy to replicate, but we spend a lot of time developing the backend infrastructure and training the security guards.” Another key area that Arisetty believes has led to their success is a standardisation of cost across communities, from premium apartments to middle-class ones. “The cost remains the same for everyone,” says Arisetty. “Many other apps offer their services for free, but I believe it is mostly for acquiring data.”

So where does MyGate go from here? “One of the key things about being in the Indian Air Force and being a pilot is airmanship,” says Arisetty. “You are constantly aware of your surroundings and the environment. With MyGate, we want to remove the calling bell from our lives.”

Tweets by @forbes_india
Comic: #BoycottMillennials
What entrepreneurs can learn from space exploration