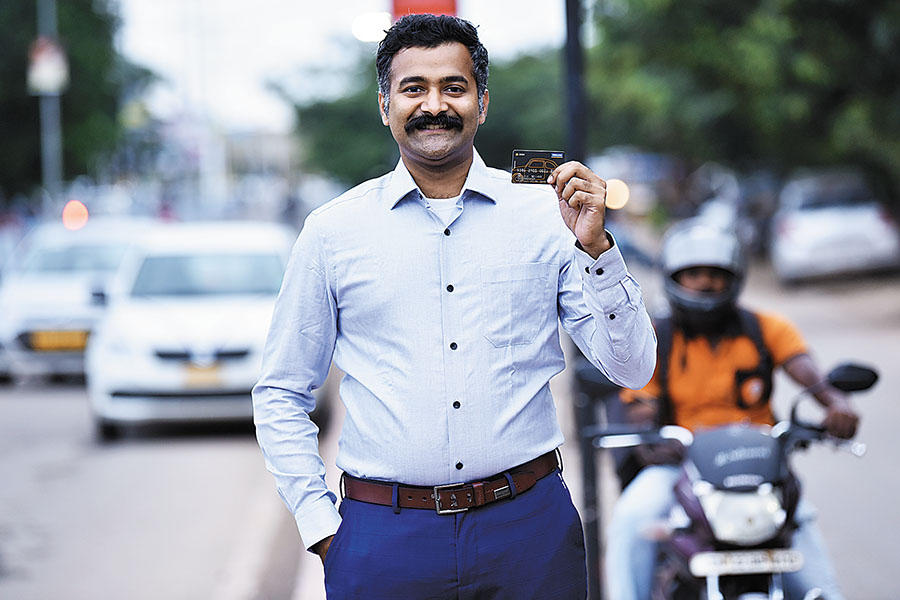 When asked what he likes best about his job, Shiv Shivakumar pauses for a long time. “I like the flexibility,” he says, eventually. As a delivery boy for Swiggy, the 23-year-old is part of the gig economy where short term or freelance jobs are assigned via online platforms.

He signed up on the platform eight months ago, rented out a bike on Drivezy, an app that enables vehicle rentals and pulls 11-hour days. He makes about ₹1,000 a day on average, he says. If he works more, he earns more. But that’s not enough to cover his fuel and rental charges. “It’s always a struggle when I have to pay my dues,” he says.

Enter Bon Credit, a Bengaluru-based startup that provides credit to giggers like Shivakumar. “Our aim is to cover the working capital requirements of gig economy workers,” says founder Bhaskar ‘Bosky’ Kode. The idea came to him when he was working as a product engineer at a startup in his hometown Pune. He would take an Uber to work and invariably strike up a conversation with the driver during his 45-minute commute. “I found that they all had similar issues,” says Kode. “Between pay cycles, they struggled to pay for fuel and cover everyday expenses like toll or parking charges.” Loans were hard to come by even though giggers earned ₹15,000-35,000 a month, simply because monies were earned “piece rate” or per task completed, as opposed to a fixed salary like an employee. “It just didn’t make sense to me,” says Kode.

It didn’t take him long to quit his job and start out on his own in 2018. The vision was to make “getting credit for gig workers as easy as getting a sim card”, explains Kode. In a B2B2C play, Bon ties up with NBFCs on the one hand and marketplace platforms like Swiggy, Uber and Dunzo on the other. Loans are extended to the workers of the latter on a weekly basis. Bon does so by drawing on a proprietary algorithm to work out a gigger’s risk profile and consequently the amount of credit that can be safely extended.

After a one-time activation fee of a few hundred rupees, gig workers get a Mastercard-enabled Bon credit card with a uniquely set credit limit. Ticket sizes are ₹1,500 a week on average, says Kode. Giggers can use the card to help them tide over work-related expenses between pay cycles. “We’ve identified the top 10 expenses for every profession. The card can’t be used for personal expenses,” says Kode. For instance, Shivakumar can use his Bon card at petrol stations, but not alcohol stores. “I used to waste a lot of money earlier by going to restaurants,” says Shivakumar. “Now I can only spend on expenses related to work. It has helped me save more.” Based on his credit behaviour, Bon gradually increased Shivakumar’s credit limit from ₹1,500 a week to ₹3,000 a week currently. The fact that Bon auto debits his interest payment (around 2 percent) from his Swiggy earnings at the end of the week is key to Shivakumar’s new-found financial discipline.

It’s also what has endeared NBFCs—around 10 sub-₹100 crore firms—to Bon, despite the turmoil in the sector. “They like that we have started with micro credit, that we control where the money can be spent and that we are deducting the interest payments from workers’ earnings,” says Kode. Bon is now in talks with larger banks and NBFCs, he adds.

Interestingly, Bon uses “high frequency auction technology” to connect NBFCs with customers, just like Google connects advertisers with users. “In a few micro seconds, Google runs an auction between competing advertisers, all bidding for a particular search word and willing to pay ₹8-10 per click for it. We’ve incorporated a similar technology wherein once a customer transacts for, say ₹500, in a few milliseconds an auction occurs between lenders offering to loan X amount at an interest rate of 1.5 percent, or Y amount for 1.2 percent,” explains Kode. The benefit of this technology is that as Bon adds more lenders, interest rates will fall, making loans cheaper for borrowers. “From a global perspective we are the only ones to have introduced this in the lending space,” says Kode.

Bon raised a seed round of ₹7.8 crore ($1.1 million) led by the Omidayar Network last August. Kris Gopalakrishnan’s Axilor Ventures and Better Capital also participated in the round. “With its focus on the self-employed segment, Bon is driving recurring usage based on learnings from the over 600,000 micro loans they’ve made,” points out Siddharth Nautiyal, investment partner at Omidyar Network India.

The opportunity is enormous. Gig workers are one of the fastest growing segments around the world, as also in India, says Vaibhav Domkundwar, founder at early stage venture firm Better Capital. While official figures are unavailable, Kode estimates there are 100 million giggers in the country, of which 1 percent is associated with marketplaces like Ola and Swiggy. The majority are freelancers like home chefs or graphic designers. “There had to be someone who cared for the needs and challenges faced by these gig workers, especially as the debate around ‘Are gig workers your employees?’ rages on globally. Bon is filling this massive gap of being the benefits provider for gig workers,” says Domkundwar.

In addition to servicing the lowest-rung of giggers, Bon also services larger customers like fleet owner Vinayak Nadiger. His 22 vehicles are registered with a ride-hailing platform in Bengaluru. Before he was introduced to Bon, Nadiger, 32, would struggle between pay cycles to tank up on fuel, pay for the multiple toll charges and ensure that his 25 drivers got salaries on time. “I had taken a loan from a bank to purchase the vehicles, so could not get another loan on top of my existing loan,” he says.

Bon initially offered him a credit limit ₹1.5 lakh a week, which has since gone up to ₹4 lakh a week. “Now that my working capital is taken care of, my earnings have shot up from about ₹2 lakh a week to ₹7-8 lakh a week,” says Nadiger, adding that he now has 40 vehicles and employs 45 drivers. “Bon is the backbone of my business.”

With Uber recently announcing its foray into micro credit, some of Bon’s revenues may dry up, but Kode is unperturbed, as the startup is fast scaling. Bon has serviced 30,000 customers so far across six cities, including Bengaluru, NCR and Mumbai, processed 600,000 micro loans and claims to be unit economic positive per loan. Aside from the annual activation fee it charges customers, Bon takes a commission on every loan and also has a rev-share agreement with its NBFC partners.

Micro loans are the first step in Bon’s journey, says Kode. Over the next 12 months it plans to roll out micro-insurance schemes such as those that insure gig workers’ smartphones. Micro savings are also part of the plan. The ambition is to be a full stack benefits provider for giggers. Or as Kode puts it, “…to simply care for this neglected segment.”