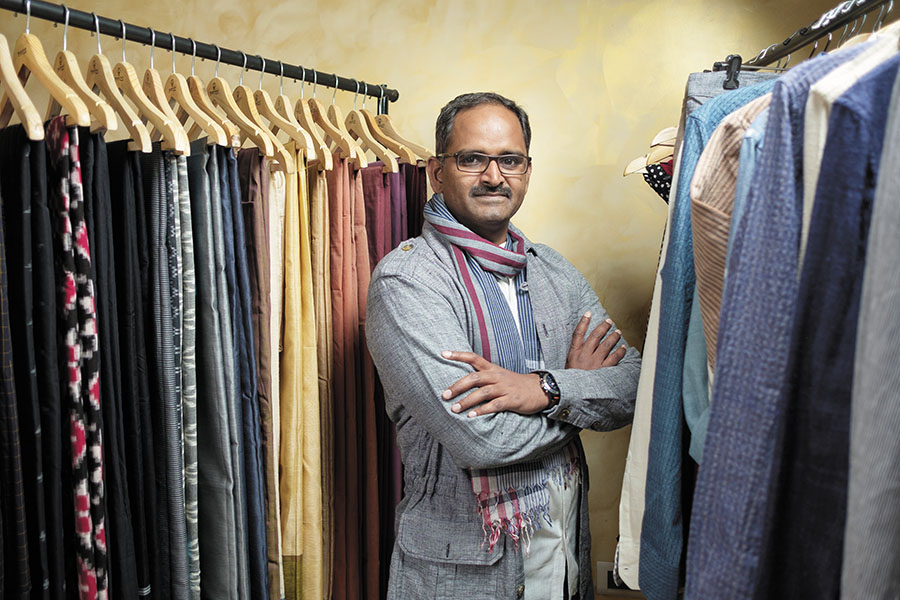 For Siva Devireddy, 41, the just-concluded Lakme Fashion Week (LFW) in Mumbai was his first tryst with high-street fashion. At the prestigious event, Devireddy debuted his handloom fashion label, The Good Loom, an ensemble of 18 designs hurriedly put together over 90 days. His collection, largely comprising blazers, shirts, cargo pants for men, and sarees, was showcased along those of fashion bigwigs such as Tarun Tahiliani, Narendra Kumar, and Ritu Kumar, among others. “This was the first fashion show of my life,” he says.

However, Devireddy isn’t a stranger to the world of fashion. In 2011, the techie-turned-entrepreneur launched GoCoop that operates as an online marketplace for over 300 handloom cooperatives across 10 states. The Good Loom, which would officially be retailed both online and offline in mid-April, is actually an extension of the work that Devireddy has been doing with handloom artisans in rural India via GoCoop (which has a base of about 80,000 artisans, nearly 65 percent of them women).

Launching a private label handloom brand was never a business proposition for Devireddy, as the core of GoCoop was about artisans and their livelihoods. But he began to deliberate on it since last June. While GoCoop works on slim margins in order to give the artisans the best price for their products, the upside of a private label is the high margins. And there aren’t too many players in the branded handloom segment, particularly in menswear. “This [The Good Loom] will provide more dependable work, even though for a smaller number of weavers,” says Devireddy.

But, it also means higher incomes for the weavers, which is a significant step in furthering the social impact of GoCoop’s efforts. Says Srikrishna Ramamoorthy, partner at Unitus Seed Fund, “We invested in GoCoop in December 2013 as it was addressing a critical gap in India’s crafts sector—eliminating middlemen, providing better access to market and ultimately, improving the livelihoods of India’s artisan community.” And by integrating the concept of a socially-conscious lifestyle for its consumers, Ramamoorthy believes that GoCoop is transforming India’s handloom and handicrafts industry, for both the artisans and consumers.

The Indian fashion brands space, which is dominated by big clothing retailers such as Arvind, Aditya Birla Fashion and Retail, and Future Lifestyle Fashions, has seen the successful entry of startup brands that cater to niche market segments. Consider Wrogn, a youth lifestyle brand that is endorsed by cricket captain Virat Kohli, which in three years is inching towards the ₹100 crore revenue mark. Then there are the private label brands of Myntra, for example Roadster, which has already crossed the ₹500 crore revenue mark in six years. “If we could do something like Wrogn in this space [of handlooms], we are looking at ₹100 crore in business in the next three to four years,” says Devireddy.

There is already palpable excitement among new investors for The Good Loom, even before the brand is officially launched. While not divulging any names, Devireddy says there are “people” wanting to acquire 50 percent of this label. Says impact investor Nagaraj Prakasam, who’s part of the Indian Angel Network that has invested in GoCoop along with Unitus Seed Fund, Infosys co-founder Kris Gopalakrishnan and Saha Fund, “People want to franchise the brand, they want to roll out standalone retail stores of the brand. That’s the excitement.”

Devireddy, though, is a bit apprehensive as it’s still early days. But, GoCoop is in the midst of fundraising and is expected to close a deal by May-June.

Last November, GoCoop did a pilot exhibition of the The Good Loom in Devireddy’s hometown of Hyderabad. The event, which took place at the Taj Deccan, had an unexpected outcome. “LFW got in touch with us. They said, ‘We like what you are doing as a company’. They didn’t know then that we were just a pilot project,” recalls Devireddy. Eventually, he ended up meeting LFW officials who convinced him to showcase The Good Loom. “They said we had the potential to become the next Fabindia,” he says.

“Several designers and retailers have shown interest to work with them on a B2B level as well as on a B2C level and have appreciated The Good Loom in terms of quality and product,” says Gautam Vazirani, Sustainable Fashion Curator at IMG Reliance, the organiser and joint IP owner of LFW. “There is a big gap in the market for this kind of a product.”

The Good Loom would see its menswear products priced between ₹1,500 and ₹3,000, while its sarees would be in the range of ₹2,000 to ₹8,000. “If we consider Fabindia as mainstream in the market and Jaypore as luxury, then we would be playing in the premium end,” says Devireddy.

Even the likes of suiting brand Raymond are readying themselves to enter the category. GoCoop is collaborating with Raymond to supply them handloom textiles and khadi fabrics from its marketplace of rural cooperatives. “From a consumer perspective, there is a small percentage who want to wear handloom products. It’s a small target group, but growing. And the big brands don’t want to lose out on this segment,” says Devireddy.

Given the action in the space, The Good Loom would need a well-thought out scale-up plan. Currently, a team of six in-house designers are working on the collection. “If we want to scale fast, the biggest problem will be design,” admits Devireddy. “I want to get into a crowdsourced model.” His idea is to work with 30-odd designers, from Nepal to Paris, which would give the brand more designs to choose from and potentially open newer markets. But even as he thinks big, his commitment to the livelihood of rural artisans isn’t overshadowed. As Prakasam says, “The ultimate aim is to see how to the increase the income of weavers. And The Good Loom pushes the envelope further.”