India looks like a country that can change the whole world: Nobel-winner Paul Krugman

The 2008 Nobel prize winner in Economics speaks about manufacturing, his changing perception of Narendra Modi and the US-India trade wars 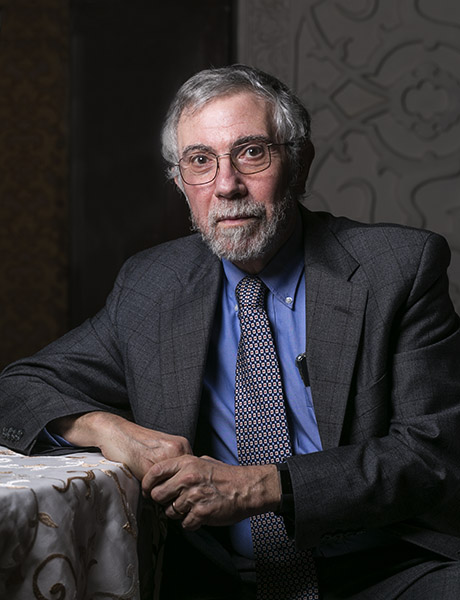 It has been nearly four years since India’s prime minister, Narendra Modi announced a policy to make Asia's third-largest economy a hub for manufacturing in South Asia. The prime minister’s ambitious Make in India programme looks to improve manufacturing's share in GDP to 25 percent by 2020 from nearly 16 percent now.

While manufacturing is yet to pick up at the rate the government expected it to, Paul Krugman, the 2008 Nobel prize winner in Economics for his work in new trade theory, reckons that "It makes almost more sense than anywhere" to shift from a services-led growth to a manufacturing-led one in India.

In an interview, on the sidelines of the News18 Rising India Summit, Krugman spoke about manufacturing, his changing perception of Narendra Modi and the US-India trade wars.

If you look around our cities here in India, you see an India on the rise. Yet, one half that depends on agriculture is very upset about falling commodity prices and generally unprofitable prices. So how do large developing countries with substantial rural populations grow?
The answer is always some combination of migration. In fact, some people will want to move. But you also have to invest in rural areas. I was struck listening to Prime Minister Modi talk about rural electrification, which was a major theme of the US policy about 80 years ago. If you look, Brazil trying to invest in rural development program and healthcare. India has same per capita GDP as Japan in the 1960s and has the same per capita GDP in Italy in 1950s. 70 years later Italy still has a pretty backward self despite a lot of investment. I don’t think you can expect the problem to be ever fully solved, but it can mitigate by a combination of migration and public investment.

Q. What's your view about India from outside?
It is paradoxical. There is still immense poverty. It is still very backward. The cities are busy but there is still a lot of poverty. On the other hand, the dynamism is to a degree that, a few years ago would have seemed inconceivable few years ago. The amount of wealth and the number of sophisticated people one encounters (in India) in media and academics, in business in remarkably high. So, it looks like a country on its way up and given the size, that can change the whole world.

Q. In terms of PPP, India is the third largest economy in the world. Do you think it is okay to describe India as an economic superpower now?
Yes, I think. Although you need to be a little right there. The standards to be a superpower keeps on rising. But, India is still considerably smaller than either China and the US. It's not on the same scale. In some ways, India is where Japan has been for some time. It is a very important economic power but not quite in the first rank and it is probably going to stay in that position for a while. But its a big power. People would want to take India's views on everything, from international trade policy to security policy very seriously.

Q. The Indian Prime Minister has laid a remarkable focus on Make in India. We have remained a service economy, how does it pan out?
It is different at different stages of development. If you look at the world as a whole, manufacturing employment is still rising slightly as a share of total employment. Poorer countries are still in the shift from agriculture to manufacturing. It is only at much higher levels of per capita income that they have this shift from manufacturing to services. India, in particular, happens to be a unique example of a large developing economy which hasn't had a manufacturing-led export boom. But instead a service-led export boom. So, it makes sense almost more sense than anywhere else to talk about shifting it to manufacturing here. China is already overwhelming in their manufacturing sector and they need to build their service sector. India still needs to get into the manufacturing game.

Q. India's strength has been low-cost manufacturing. So how much value can it add?
For a long time, that was China’s story. When I talk to people about globalisation,  I would like to talk about Bangladesh. Bangladesh is a low productivity country, has many many disadvantages. And even its productivity looked like it is 30 percent below China’s. But it has low costs because it has a lot of people. It was not long ago that people used to talk about a Malthusian crisis and famine in Bangladesh instead now, their per capita GDP has doubled largely thanks to its ability for low-cost manufacturing and exports.

India is richer and is further up the value chain, but it can still do quite a lot. There are clearly a lot of things that India could be manufacturing.

Q. There is always the question of services being unable to create more jobs?
That is why India probably needs to move more into manufacturing. The service exports do disproportionately employ highly educated, highly skilled people and you have hundreds of millions of people who are going to need jobs that don't require those skills. And some of that could come in the back end of services to the service sector. But, manufacturing is a natural place to employ. India has got to move millions of people off the land into some kind of regular job, and manufacturing probably fits the bill.

Q. Can then India become a manufacturing hub, especially with competition from other Asian countries?
It's a big world. Every time you say there can't be room for more players turns out there is room for more players. China is becoming increasingly high cost. Chinese wages are rising. China is no longer the low-cost country it was. China is rapidly losing ground in apparel to Bangladesh. As the Chinese move up the chain, there will be an opportunity open. So, for everyone who thinks that the world has run out of opportunities for export has turned out to be wrong.

Q. What is your sense of export subsidies that the Indian government is providing? Last week, the US took India to WTO for providing export subsidies. What are your views?
We need to be careful. I have not immersed myself in those cases. As a general rule, what you really want to mostly do is let the market work. Provide the infrastructure that lets it work. You don't certainly want to get into a fight with the WTO. WTO is your friend here. The rules of the global trading system are especially helpful for emerging markets trying to make their way up.

Q. Can you summarise the defining trends in the world economy in the next two-three years?
We have had a very good run for 5 years of solid recovery advanced growth and continuing growth in the emerging world. The US has to slow down, probably, from 2.5 percent to 1.5 percent. Europe has little further to run, but it needs to slow down. But, can we do that without hitting some kind of bump in the road? What I worry about is that we don’t have a lot of shock absorbers. Interest rates are zero in Europe and about 150 basis points in the US. If we hit some kind of credit crisis, some kind of bubble that bursts that we don't see, we won't have a really good response. So, the predictable part of the story is what we have been leveling off as good growth, the unpredictable part is what if we hit a bump in the road and then nobody knows how we would respond.

Q. You have been tracking Modi's policies for the last four years. What are your views?
He has been a little bit radical. Demonetisation was a foolish policy. India was more resilient to the policy than I feared. But, overall, he seems to be a competent economic manager. He has been trying to do something about the rural poor. So, the direction is in the right place. He falls into the category, I have a personal category of people who disturb me on my social instincts. He is a Hindu nationalist, that's not something a more tolerant world would want to see. But, he has been an effective economic reformist leader. Reminds me in peculiar ways of Shinzo Abe of Japan who also is also a great nationalist. He is also in some peculiar way a social liberal, the supporter of women in the workforce. I wish there were lots of perfect leaders out there. Most of them are a mixed bag. There are certainly some good things to say about Modi.

Q. Modi's policies seem to be tilted to the poor and the women. To that extent, will you describe him as a social liberal?
The problem is that he doesn't fit the western categories. But, yes, he seems to be more of a social liberal than one would have expected from other pieces of the package. It just goes to show that, we always want to see people and fit them into a western model of the political spectrum, and that often doesn't work in other countries.

Q. Have your views about Modi changed from the time he took office?
To be honest, I did not pay a whole lot of attention. We did not pay enough attention to India until recently when India has been too much off the radar screen. India's rise as a semi-superpower has snuck up on us and got us by surprise and now we do need to pay attention.

Q. What is your sense of government's role in business, public sector banks, industries? You think they should get out of them?
There are some things that the governments run well and some things badly. In most places, government-run healthcare is the most efficient way to do it. Government-run manufacturing has been a disaster everywhere. Banking is an intermediate case. Japan's postal banking system has been a good system. I don't have a good sense of the Indian system where the balance has been struck. We know that 30 years ago, way too much Indian economy was directly run by the government. But that doesn't mean that none of them should be. So I think we need to be pragmatic. We need to figure the pieces that work.

Tweets by @forbesindia
If you want to be rich, you'd better be born in, or emigrate to a rich country: Economist Branko Milanovic
GoCoop's tryst with high-street fashion