The Shinde brothers used the top-down approach with Mezi, starting with HNIs 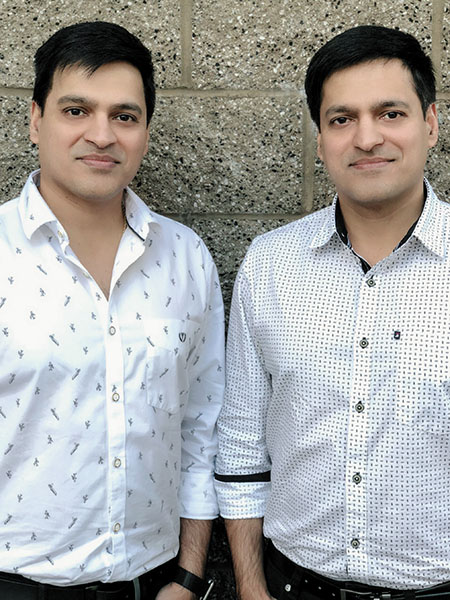 Twins Snehal (right) and Swapnil Shinde share a lot more than their birthday. They are passionate about the same things

Snehal Shinde didn’t have an inkling of what was coming his way as he walked into one of his favourite Mountain View eateries, Shana Thai, one July evening last year, to meet American Express executives Luke Gebb and Phil Norman. A couple of hours and a scrumptious dinner later, Shinde walked out of the California restaurant with an offer from American Express to buy Mezi, an Artificial Intelligence-powered concierge app focussed on travel that he co-founded with his identical twin, Swapnil, two years ago.

Essentially, the Shinde brothers, 39, built a chat platform that would converse with consumers—listen to their travel needs, throw up suggestions and close a transaction—with minimum human intervention. Currently, about 60 percent of the responses on Mezi are automated, while the rest are manual replies from employees.

Not a newcomer to mergers and acquisitions—the brothers sold their first venture, Indian music-focussed streaming app Dhingana to larger peer Rdio in 2014 for about $10 million—Shinde did well to maintain his composure through the dinner. Bursting at the seams with excitement, he scampered home immediately after to call Swapnil, chief executive officer of Mezi, who was in India for work.

“We were thrilled. We knew it [an acquisition] might happen someday, but never thought it would happen so soon,” Shinde, chief technology officer at Mezi, tells Forbes India during a visit to Bengaluru in February. Neither did some of its investors, especially at a time when profitable exits are few and far between.

“Mezi was the fastest exit we made, in about 18 months. In fact, it was also the fastest investment decision for us. We closed the investment in Mezi in two weeks,” says Ash Lilani, managing partner at Saama Capital, which invested about $2.5 million in the company. “We had confidence that Snehal and Swapnil had a sound technology backbone, and a clear view on how they could be disruptive. Therefore we took a leap of faith in the business and monetisation models.”

For the twins, who share a lot more than a birthday—they secured successive ranks in board exams at school in Nashik, Maharashtra, graduated from the University of Southern California with a master’s degree in computer science with the same GPA of 3.82, and even worked together at Symantec and Yahoo—a buyout offer by American Express was too big to ignore.

After all, Mezi was inspired by the banking behemoth’s concierge service for premium customers. American Express Ventures, the investment arm of the bank, was an investor in Mezi, while AskAmex, the bank’s concierge app launched in February 2017, was built on Mezi’s technology platform.
Shinde’s initial euphoria, however, didn’t last long. In fact, it fizzled out the very next morning, when Gebb and Norman disclosed the money on offer. “It was way lower than what we finally agreed on,” Shinde reminisces, sipping on a cup of green tea.

As intense negotiations followed, the next three months were enervating. The reason the Shindes stood firm on their demand for “something close to $150 million”—while American Express didn’t agree—was the company was adequately funded: It had raised $9 million in a series A round from American Express Ventures, Nexus Venture Partners and Saama Capital in July 2016; a year earlier it had raised $2.5 million in a seed round from Nexus Ventures, and angel investors, including top Rdio executives Anthony Bay and Scott Bagby. The company—which has offices in Sunny Vale (California), Mumbai and Pune, and 65 employees—was also firming up plans to raise a series B round when American Express swooped in. “There was no red flag in the company,” says Shinde.

Also, Mezi had become more than just another cog in the wheel for American Express’s digital drive. “By the summer of 2017, AskAmex was getting great results. Consumers ended up spending tonnes of money buying travel, booking concert tickets, retail gifting, etc. Every buyer who bought anything on the AskAmex app once, transacted again in 30 days,” adds Shinde.

By September 2017, both parties had agreed on a deal, and the acquisition was closed in January 2018. Shinde does not disclose the final figure, citing confidentiality clauses, but says it met his expectations. “We never rushed, and were ready to walk away at any point. Those were the most exciting but stressful days, actually; all the emotions you can think of,” he says.

Mezi became a standout success in a domain that gained popularity among consumers at the turn of the decade. By 2008, 94 personal assistant startups mopped up $192 million from marquee investors, including Sequoia Capital, Menlo Ventures and Khosla Ventures, according to data from Tracxn, a startup tracker. Most of these startups, which focussed on the masses, however, saw their fortunes nosedive amid an intense land grab for market share as well as competition from Apple’s Siri (Apple bought Siri in 2010 for about $200 million), Microsoft’s Cortana, Google’s Alo and Amazon’s Alexa.

Industry experts say Mezi’s acquisition by American Express is one of the biggest deals in the personal assistant segment. The firm bucked the industry trend by taking some tough calls, and taking them real quick.

First, the company stuck to serving premium consumers. For the longest time, Mezi was available only to iPhone users, and launched an app for the Android platform only last December. “Businesses look at the bottom of the pyramid to begin with. We didn’t take that route. That is why probably we ended up building the product the right way. Bottom of the pyramid are not concierge users. We always had the top-down approach—start with high net-worth individuals, then senior management executives,” explains Shinde.

Secondly, the brothers were quick to identify travel as the key growth driver. Within six months of launch in July 2015, Mezi channelled its resources to cater to travel, a vertical that was growing by 300 percent every month compared to about 70 percent growth in retail and gifting. 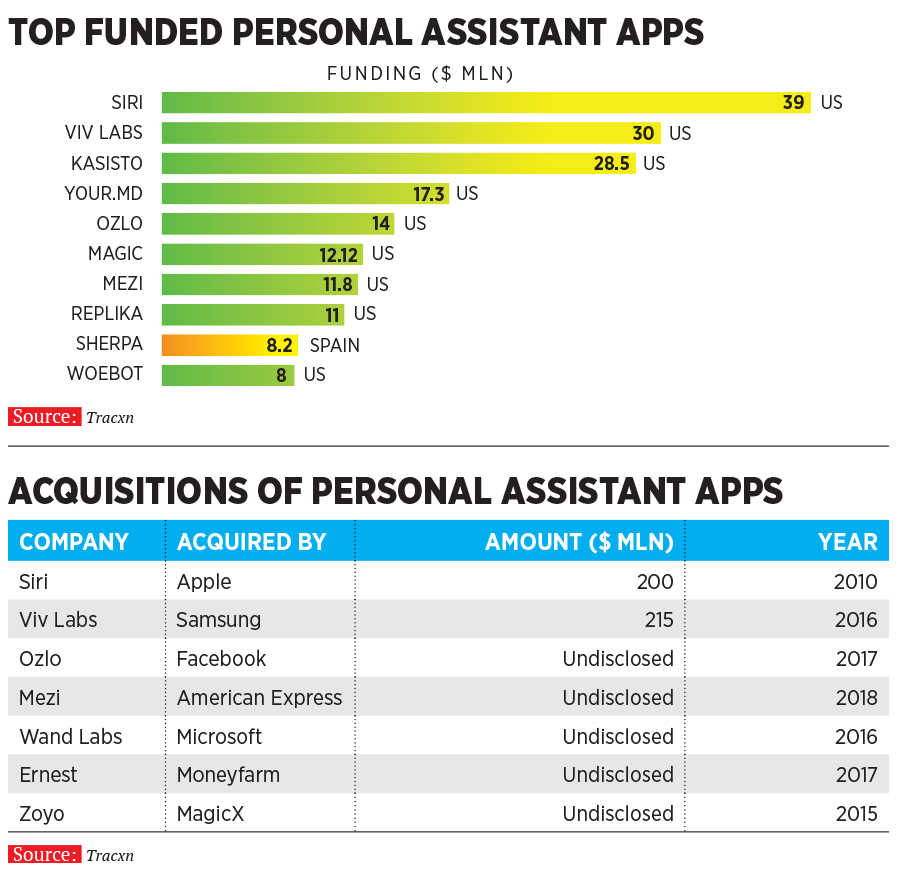 By the end of 2016, the company also started white-labelling its products, ie sell the technology to businesses that were looking to launch their own concierge services, a decision that helped Mezi board the gravy train fast. The move ensured a steady stream of revenues with minimal marketing and customer acquisition costs. Interestingly, the prod to do this came from American Express, when the firm expressed interest in partnering with Mezi for the launch of AskAmex in October 2016. “By early 2017, we were convinced that the business-to-business model had legs and decided to focus on this. We couldn’t do B2B and B2C simultaneously. As a startup, being a small team, we had to pick our battles. B2B had good scope with a monthly licence fee and a per-transaction fee.”

In the first few months, Mezi’s B2B clientele comprised Amex, Castro Travel and Adelman, among others. The consumer-facing app remained, acting as a platform to test new features. “Relentless pursuit of product-market fit, being agile, and not being afraid of changing trajectories and business models if needed, building a solid technology foundation and assembling a great team have made Mezi a resounding success,” says Jishnu Bhattacharjee, managing director at Nexus Venture Partners. Mezi happens to be Nexus’s first bet from its fourth fund, a $450-million corpus, and the first exit for that fund.

For the Shinde brothers, taking the entrepreneurial plunge was a matter of time. Having grown up in a family of entrepreneurs in Nashik—their father ran a structural engineering consultancy, grandfather a security agency, and maternal uncles a PVC (polyvinyl chloride, a synthetic material) pipes company—the twins struck their first ‘business deal’ at 14, when they sold a few of their paintings to one of their father’s US-based client for ₹500.

Ever since, the duo has collaborated on all of their biggest achievements, be it building a location-based advertisement product as part of their engineering curriculum at College of Engineering, Pune, launching the Windows-based streaming app for television personality Howard Stern’s radio show while at university in the US, or starting their own venture.

White-labelling its products helped Mezi board the gravy train fast

“We grew up looking at the struggles that our father and uncles went through to begin something, and make it successful. We enjoyed the fun, flexibility and the freedom they had,” says Shinde. His parents, though, did not share similar sentiments. “Our parents warned us against committing the same ‘mistakes’. They said, ‘Work for a big company and have a safe job’, but, we did exactly the opposite.”

Quitting Yahoo to launch Dhingana in 2011 was a calculated risk, much like the decisions to focus on travel or launch a B2B vertical at Mezi. The brothers had tested the waters for about three years, between 2008 and 2011, hosting Dhingana on a Sun Microsystem server installed at their Los Angeles apartment, and watching the user base for the “side project” snowball every quarter. “By the beginning of 2011, Dhingana had a million users from 120 countries. That is when we decided to quit our jobs,” says Shinde.

This was long before music labels in India woke up to the internet. Despite amassing a huge user base, Dhingana fell prey to operational challenges like high licence fees, before selling to Rdio in 2014. The firm had raised about $8 million from Inventus Capital Partners, Helion Venture Partners and Lightspeed Venture Partners. “Given that it was our first venture, I would call it a moderate success,” says Shinde.

Nevertheless, the “moderate success” of their first venture didn’t deter investors from backing their next. The camaraderie the brothers share possibly did the trick. “They complete each other’s sentences,” says Bhattacharjee of Nexus. “Snehal is one of the best technology and product brains I have come across, and Swapnil is an aggressive, outward-facing go-getter, nicely complementing his brother.”

Shinde says the brothers have never fought, not even over a toy, while growing up. The fact that they share the same passions—technology, gadgets, wine tasting at Napa Valley or driving fast cars (Shinde owns a Mercedes-Benz and Swapnil drives a Maserati)—have made them the perfect sounding board for each other. “That is one advantage of having your brother as a co-founder. For instance, I had a strong gut feel about the B2B business model, while Swapnil was bullish about travel as a vertical,” says Shinde.

For now, the brothers will continue to run Mezi as a wholly owned subsidiary of American Express. It may not be long before investors make a beeline to bankroll their next venture.