Storyboard18 - Thums Up has the blood and sweat of all those who worked on the brand for decades: Coca-Cola India's Arnab Roy

The people behind Thums Up's latest blockbuster campaign featuring Shah Rukh Khan talk about what it takes to build an iconic brand and the genesis of a toofani idea, in an exclusive interview 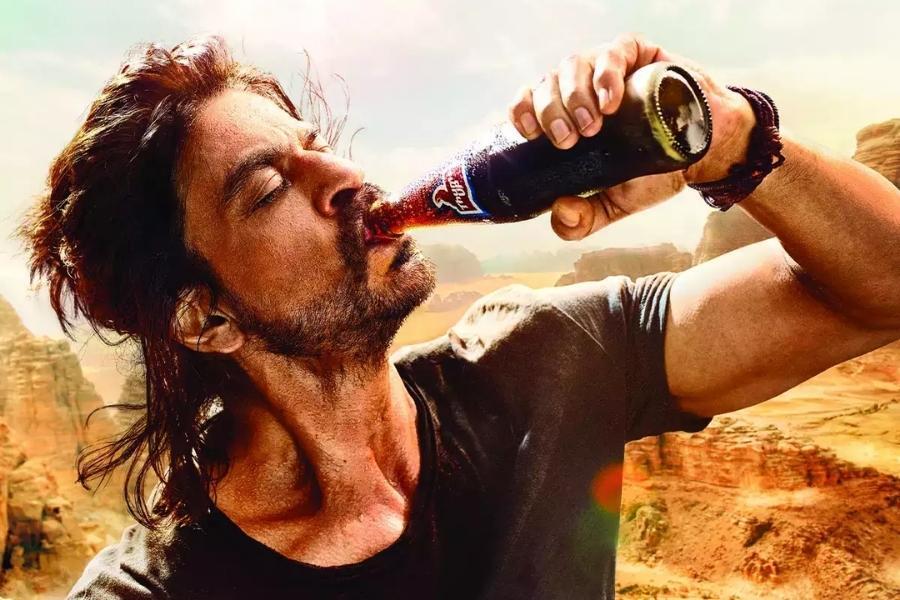 Two iconic Indian brands unite. Homegrown but owned by The Coca-Cola Company, Thums Up has launched a campaign, ‘Soft Drink Nahin, Toofan’, starring Shah Rukh Khan. The company roped in the star to present its new #ThumsUpStrong platform. Conceptualised by Ogilvy, Khan is seen as an action hero, performing deadly stunts and beating up bad guys on a high-speed train. The campaign also coincides with the key milestone of Thums Up becoming a billion-dollar brand.

Storyboard18 caught up with Arnab Roy, VP and head - marketing, Coca-Cola India and Southwest Asia, Piyush Pandey, chairman of global creative and executive chairman, Ogilvy India and Sukesh Nayak, chief creative officer, Ogilvy India, to find out more about the genesis of this toofani idea. In this exclusive interview with Storyboard18, they share what it takes to build an iconic homegrown brand.

Edited excerpts.
Q. Thums Up has had a plethora of celebrity endorQ. Thums Up has had a plethora of celebrity endorsers including Bollywood stars, cricketers, etc. Now you’ve come up with a campaign featuring Shah Rukh Khan. Tell us about the choice of ambassador and the whole idea and insight driving this campaign?
Arnab Roy: We were looking for our face on the new campaign and working very closely with Piyush and Sukesh on this one. It was important to have someone very iconic to establish the power of the taste, a person who is not soft and who almost resembles this iconic toofan. We discussed and then realized that we had an opportunity to partner with Shah Rukh. And after that, for all of us, it was a no brainer. At the point of his career, at the point of everything he is right now, it fits entirely with the whole campaign idea. It was a joint discussion working with the Ogilvy team and then we just went all in.

Q. Piyush and Sukesh, you're repositioning the commonly used term ‘soft drink’ in this particular campaign. How did the team arrive at this idea?

Piyush Pandey: Sometimes I ask why didn't this strike us earlier? Because we are a “strong drink”. It fits in beautifully because that's what the consumer says, that this is strong. This is strong, the rest is in the category of soft drinks. Sukesh and his team came upon that and it is a brilliant thing.

Sukesh Nayak: The idea was in the brief itself, and it was very clear that we have to build the strong credentials of this drink, which is what it's known for, like Piyush rightly said. When we were thinking, it just struck us like, ‘Oh, my God, you know, this entire category is defined in this country by soft drinks. And when this drink is strong, it’s what people call it when they drink it, why are we put in the same category? So let’s shift it into its own category, which is Toofan itself.’ I remember when we presented it to Arnab and his team it was instant love. We just knew we had something very powerful.

Then came the next big question: Who? And Piyush very nicely put it. Shah Rukh is one of the most romantic icons, but also his strength of what he has achieved, I think, comes from pure inner character.

Q. Arnab, for a brand like Thums Up, this macho thunderous personality never goes out of style, though there was a slight bit of divergence when it came to your campaigns around the Olympics and the Paralympics. What was the reason to come back to this personality when it comes to your campaigns?
Roy: It'll be important to also hear from our creative partners because internally we've had the conversation. I just want to say one thing, the values of the brand have been consistent. Even if you go back to the Palat De campaign that we had—that's not going anywhere—but if you see what the Palat De campaign was about, it was about inner strength. It was about resilience. All the stories about the Paralympic athletes were about inner strength.

When we started to work on this particular campaign, the objective we had was that there was a need also to remind people that Thums Up is one of the strongest colas. That's the number one, I would say differentiating point. That's why so many people in India love Thums Up. As a brand, it's all about all these values that you see.

I do feel when you have an iconic brand like Thums Up, there needs to be a little bit of multidimensionality to what it stands upon, as long as it's within the framework.

Pandey: It is about changing the way people look at you. It's about the strength of character. So there's no deviation whatsoever. It was relevant to what we were doing in the Olympics by taking stories of people who had some perceptions about them which were wrong. You’re a Toofan, change it all.

Q. It's been five decades and still, the word Toofan finds a place in the narrative. So how do you reinvent Toofan and make it relevant to the audience today?

Pandey: The Olympic campaign is a great example of how to carve a diamond from different expressions. The more you carve it, the more it shines. So, it was a Toofan that year, it is a Toofan inside you which is challenging you and it is the Toofan that makes you do daring and mentally strong things. So there’s no deviation. Another cut on that, and that's what makes an idea everlasting, keep looking for what are the different ways society is changing and what can I find which has the Toofan within people and the strength of Thums Up magic.

Nayak: Toofan character is somebody who says ‘no, I don't agree with something and I believe in something and I want to do it.' Now that's what the Olympic narrative was, right?

In the current campaign, when you see the visuals and the graphics, it’s the same. Nature is to turn something on its head, turn something around. (Even in this campaign SRK’s turning around the idea of him being seen as a romance star.) It’s just been a day but I'm really hoping someone puts a meme out there with Shah Rukh on top of the train, dancing to Chaiyya Chaiyya, and then Shah Rukh on top of the train as a stunt actor.

So I mean, that's what we are trying to do. To me, Palat De was written with that mindset. It is what you have the ability in you to make the world believe. That's the big idea.

Q. This brand campaign comes at the same time as Thums Up becoming a billion-dollar brand. James Quincey (chairman and CEO, The Coca-Cola Company) attributed it to your focused marketing strategy and your execution plans in the country. Can you elaborate a bit more on this?

Roy: It's a super proud moment for all of us. The first homegrown billion-dollar brand. We didn't have a great start, unfortunately. Our quarter two was completely written off because of the Covid situation. The Palat De campaign brought the business back. It was not only about Thums Up, but Thums Up also pulled the whole company's business.

We had no idea as to where we’d land at the end of the year. So, it’s an extremely proud moment. But let's not forget that this billion-dollar brand was not built in a day. It’s a hard, very competitive market and not an easy category. Kudos to all the people who worked over the years. It has the blood and sweat of all of those people.

Q. What are the plans for the upcoming and the most important season—Summer?

Roy: From an ATL campaign perspective, you've seen what we have. You would have also probably seen a very strong campaign with the same idea that we released a few weeks ago, featuring Vijay Deverakonda.

This is going to be supplemented with a lot of activation programs on the ground, work programs with our key customers, programs with trade, plus also regional activations in our local markets across India.

We're also starting to work on what's the next chapter of the story. As we all said, we have hit upon something very powerful.

Pandey: In my first meeting with Arnab, the intent was written on his face and Palat De was written in his heart. We had to bring it out in words, but it was written all over him. And that kind of generated the passion.

Watch the full exclusive conversation on Storyboard18 - CNBC-TV18 on Saturday and Sunday.